Does Our Language Restrict What and How We Think? 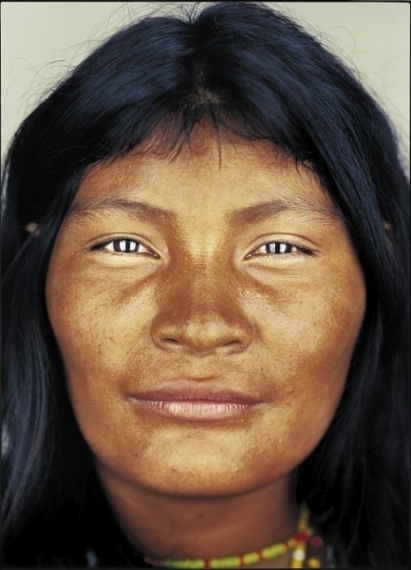 photo of Pirahã tribeswoman from the New Yorker by Martin Schoeller

My recent meditations have focused on my frustrations with the limitations of language, and specifically:

I’ve been discussing this with Tree Bressen, Melanie Williams and Chris Corrigan, and doing a bit of online research on the subject. There is some compelling evidence that indigenous languages are significantly different in the worldview they represent from European languages, and that the language that we first learn affects and reinforces our worldview in a way that reflects the culture behind the language and which permeates and perhaps constrains the way which we henceforth think about everything. D’Arcy Rheault, in his book about Anishinaabe philosophy, writes:

Anishinaabe Mino-Bimaadiziwin [philosophy or way of living] does not objectify the world creating artificial divisions of subject and object.  It is difficult to understand this since we are constantly inundated with this subject/object dichotomy in the English language, but Anishinaabe [language] is not noun-based but verb-based with the subject and object already encoded in the verb; meaning it is action- and relationship-oriented rather than subject/object oriented….

[in explaining how a baby learns] We must be cognizant that [the baby’s] apprehension of the outside world happens concurrently with the development of language for the baby.  A child that is raised in an environment with a language that differentiates between subjects and objects will thus develop these categories in her/his lived-apprehension of the world.  A child raised in an Anishinaabe environment will not develop these subject/object categories in the same way as western people perceive them since they do not exist in the same manner in Anishinaabe worldview.

This idea that language affects (and limits) what we can think and imagine is attributed to linguist Benjamin Lee Whorf. In John Colapinto’s article on the Pirahã in the New Yorker, he explains:

Whorf argued that the words in our vocabulary determine how we think. Since the Pirahã do not have words for numbers above two, [linguist Peter] Gordon wrote, they have a limited ability to work with quantities greater than that. “It’s language affecting thought,” Gordon told me. His paper, “Numerical Cognition Without Words: Evidence from Amazonia,” was enthusiastically taken up by a coterie of “neo-Whorfian” linguists around the world.

[Linguist Dan] Everett did not share this enthusiasm; in the ten years since he had introduced Gordon to the tribe, he had determined that the Pirahã have no fixed numbers. The word that he had long taken to mean “one” (hoi, on a falling tone) is used by the Pirahã to refer, more generally, to “a small size or amount,” and the word for “two” (hoi, on a rising tone) is often used to mean “a somewhat larger size or amount.” Everett says that his earlier confusion arose over what’s known as the translation fallacy: the conviction that a word in one language is identical to a word in another, simply because, in some instances, they overlap in meaning…

Everett concluded that the Pirahã’s lack of numerals was part of a larger constellation of “gaps.” Over the course of three weeks, Everett wrote what would become his Current Anthropology article, twenty-five thousand words in which he advanced a novel explanation for the many mysteries that had bedevilled him. Inspired by [linguist Edward] Sapir’s cultural approach to language, he hypothesized that the tribe embodies a living-in-the-present ethos so powerful that it has affected every aspect of the people’s lives. Committed to an existence in which only observable experience is real, the Pirahã do not think, or speak, in abstractions—and thus do not use color terms, quantifiers, numbers, or myths. Everett pointed to the word xibipío as a clue to how the Pirahã perceive reality solely according to what exists within the boundaries of their direct experience—which Everett defined as anything that they can see and hear, or that someone living has seen and heard. “When someone walks around a bend in the river, the Pirahã say that the person has not simply gone away but xibipío—‘gone out of experience,’ ” Everett said. “They use the same phrase when a candle flame flickers. The light ‘goes in and out of experience.’ ”

The late Dan Moonhawk Alford, a colleague of David Bohm and David Peat and a linguist who made a lifelong study of indigenous languages, explained the fundamental difference between indigenous and European languages (I can sense my friend Andrew Campbell smiling as he reads this):

Indigenous languages are the key to indigenous thought and worldview — and…they are as different from our European view of reality as quantum is from the classical view of reality. Recently Leroy Little Bear told the participants in the seventh Bohmian/Indigenous Science Dialogue that there is no Blackfoot language, or Navajo language, in the European sense of vocabularies and wordlists — instead, there are about 80 roots in Blackfoot [each of which stands for a kinesthetic prime of animate motion, as far as I can tell], which are combined and recombined on the fly to describe what-is as accurately as possible.

To help you understand this, take the word /Se?Se/ in Cheyenne, which by itself can mean ‘duck’ in English. But when you add /-novote/ to the end of it, meaning ‘goes down into a hole,’ you don’t have a logical connection of “duck goes down in hole” but rattlesnake! That’s because /Se?Se/ doesn’t really mean ‘duck’ at all — it means the combined dry scraping sound and zigzag motion both the duck and the rattlesnake make as they’re going away from you. It’s an event of animate motion which uniquely characterizes both the duck and the one that goes down in the hole that makes that same noise/movement.

This is a unique way of using human language — a kinesthetic base closer to Sign Language than to our more visual/verbal base. Amethyst First Rider has said on numerous occasions that when she says the simplest thing in English, like “The man is riding a horse,” she gets pictures coming up in her head. But when she says the equivalent thing in Blackfoot, no pictures come up in her head — only body feelings of movement!

I’m sure this is connected somehow to her other oft-made claim that no matter what it sounds like when it’s translated into English, when they’re speaking their own language they’re NOT using metaphor. Actually, this is true because the Indians are using categorization itself (like George Lakoff’s Women, Fire, and Dangerous Things as a lexical category in Dyrbal), while metaphor is a different kind of categorizing used extensively — some might say nearly exclusively — in Western European and other languages, and which they like to fancy is universal.

While all of us have been subtly conditioned/brainwashed/socialized by our European language/culture complex to believe in the “things” of reality as being more real than the invisible connections between them, valuing the dancers over the dancing, it’s a highly important antidote and counterbalance to know that Native American and other indigenous peoples value the dancing over the dancers, believe that processes and interrelationships are more real than the ‘things’ that grow out of them — that the physical is an epiphenomenon of the non-physical, and that cyclical timing is more real than linear time.

Moonhawk wades into the Whorf/Chomsky debate and the whole issue of the connection between language, culture and cognition in a set of pages online that Chris pointed me to. He moves beyond Whorf’s linguistic relativity to define what he calls “quantum linguistics” — analogous to (and Moonhawk says, Einstein’s inspiration for) the jump from Euclidean/Newtonian to relativistic quantum theory of matter. Citing Cheyenne teacher Sakej Youngblood Henderson he says:

Glenn Aparicio Parry, in his book based on the Bohmian Dialogues on meaning that involved several indigenous thinkers and linguists, wrote:

In the Blackfoot language, there are not nouns or verbs at all as we normally describe them in relation to each other. Instead, linguistic meaning is something similar to events emerging out of a fluid, constantly moving interconnected flux, rather than discrete interactions between subject and object. The Blackfoot worldview of synergistic, interconnected relationship is beyond the imagination of a Newtonian worldview, but much closer to a worldview of quantum entanglement or non-locality.

So where does all this get us? Some thoughts:

Subject for an interesting “dialogue” (which means etymologically “a speaking across” and contrary to popular misconception has nothing to do with “two”), perhaps. What do you think?

“What we feel most has no name but amber, archers, cinnamon, horses, and birds.”
— Jack Gilbert, The Forgotten Dialect of the Heart

11 Responses to Does Our Language Restrict What and How We Think?