Last weekend I attended the Transition Movement 2-day introductory training course in Vancouver, along with three fellow Bowen Islanders. We immediately and unanimously agreed to establish a “Bowen in Transition” chapter, affiliated with the Vancouver Transition network (called Village Vancouver).

For those who might want to know a bit more about the Transition Movement, here’s an overview of what we learned, along with a rough first cut at how we might adapt it to the needs of Bowen Island, where I now live. 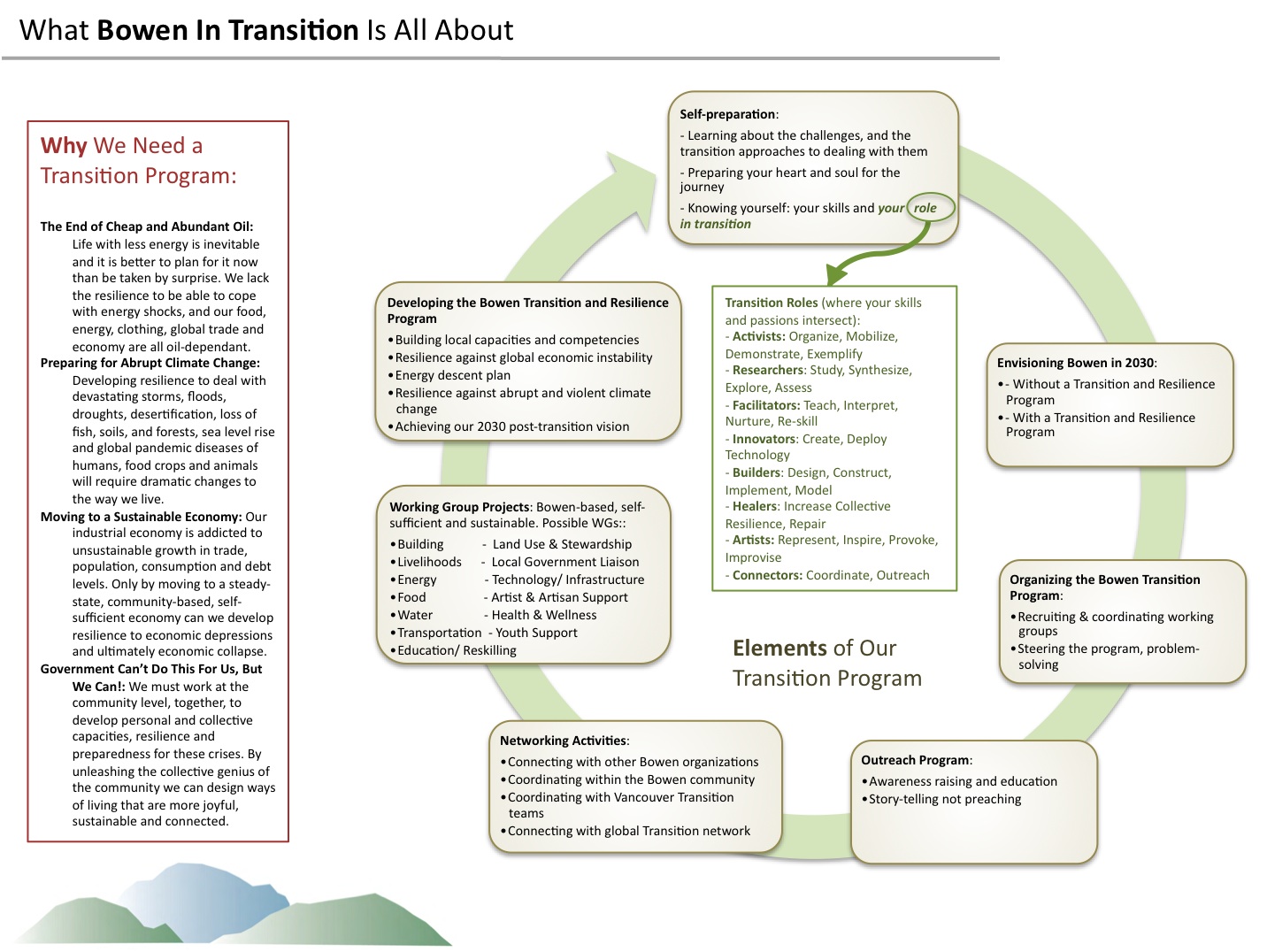 We learned how the nature and composition of the Working Groups in any particular community will evolve to meet the unique needs of that community, and why it is unwise to try to formalize or top-down manage the Transition process using the initiating team’s preconceptions of what’s best for the particular community.

Next, we talked about the Principles behind the Transition movement, and our facilitators provided some insights for Transition program initiators about how to get traction in the community (make it fun, keep to the main messages) and how to deal with skeptics and deniers (just tell them you respect their ideas and move on; don’t waste time arguing with those not ready to listen). Here are the principles: 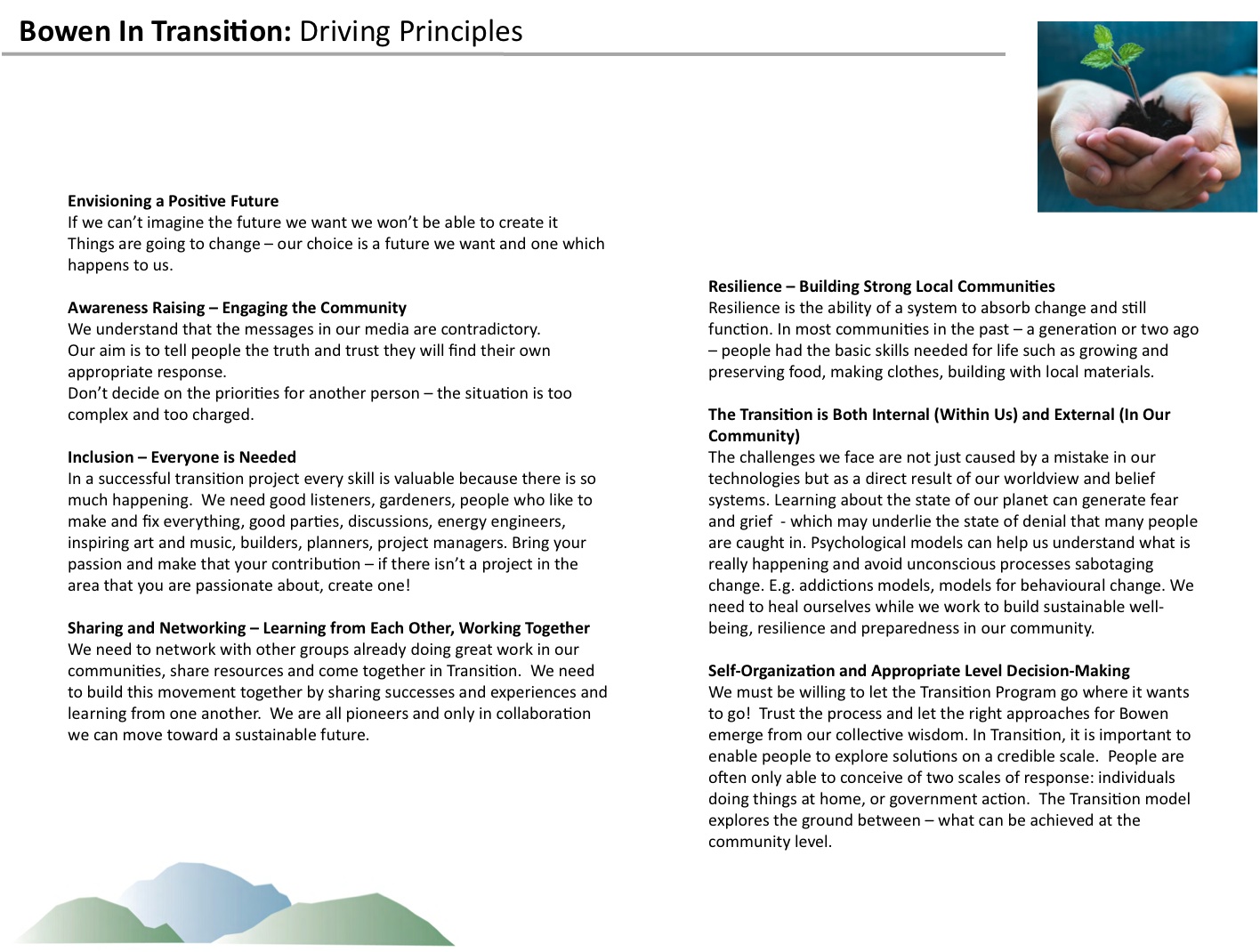 A significant amount of time was spent on the Visioning process – specifically getting your community to envision what life would be like (and how it would be different) if a Transition and Resilience program were developed now. I’m a great believer in future state visioning and scenario development as a means of getting people to really understand the purpose and value of acting now, and I was encouraged that the latest book by the Transition movement organizers is mostly focused on this visioning, and specifically on developing a timeline for future events, and how the Transition program can address, mitigate and help adapt to these future events.

Here’s a first cut at a future state scenario for Bowen Island (by contrast, Bowen is currently one of the most unsustainable and least prepared places for the challenges we face, that I know of): 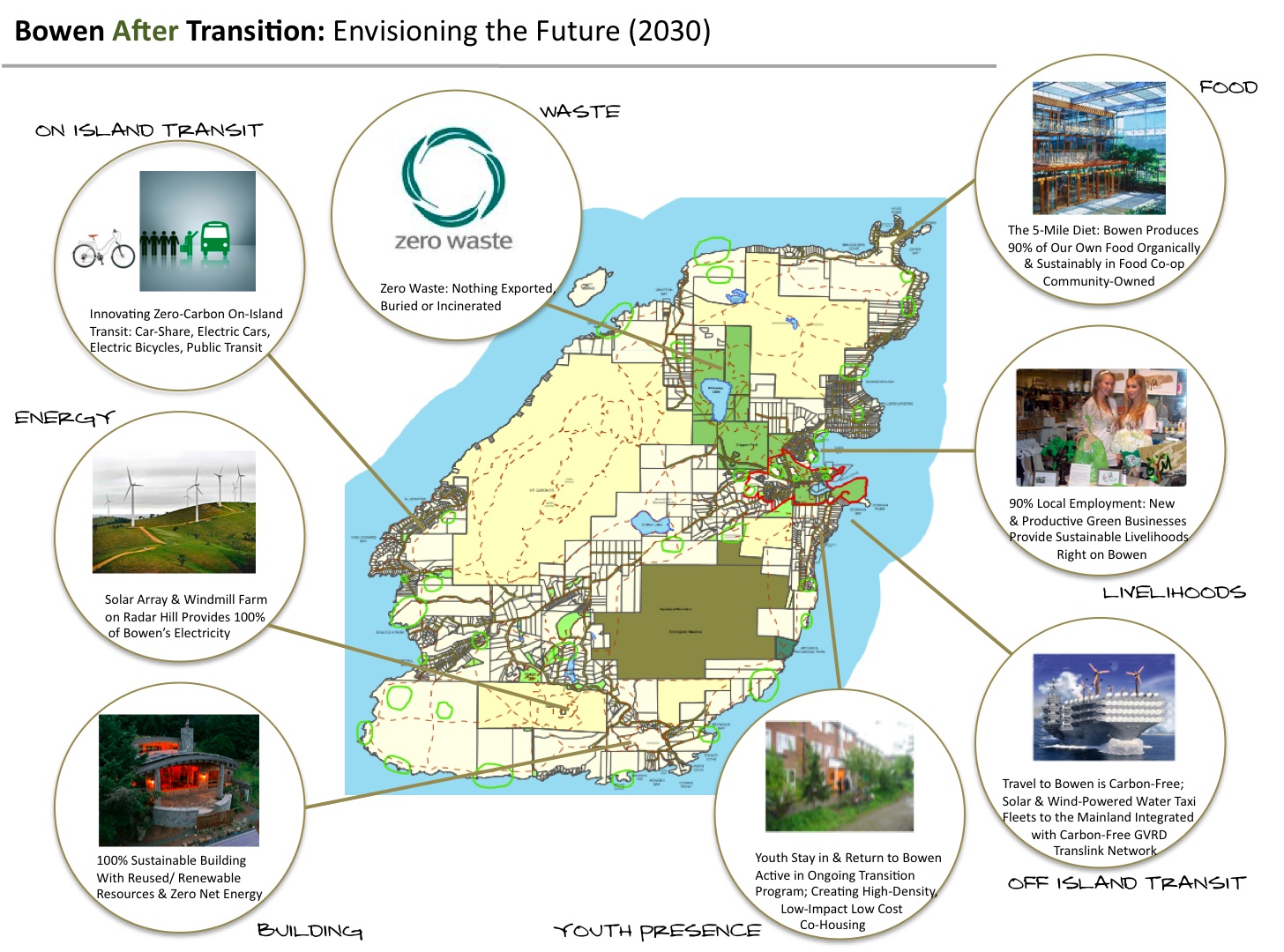 What is missing here, I think, is the alternative business-as-usual scenario (with a few black swan events thrown in) to demonstrate why inaction is not an option. I’m hoping we’ll do that in the Bowen program.

Another thing missing is a process to help people bridge from the necessary but insufficient personal actions they are taking now, to the more comprehensive approach the Transition program embodies. Here’s an example of how one UK Transition Town (sorry, I’m not sure which one) is building that bridge, as we might adapt it to Bowen’s plan; this is all about encouraging people to continue personal actions rather than simply telling them what they’re doing is not good enough (and risking turning them off): 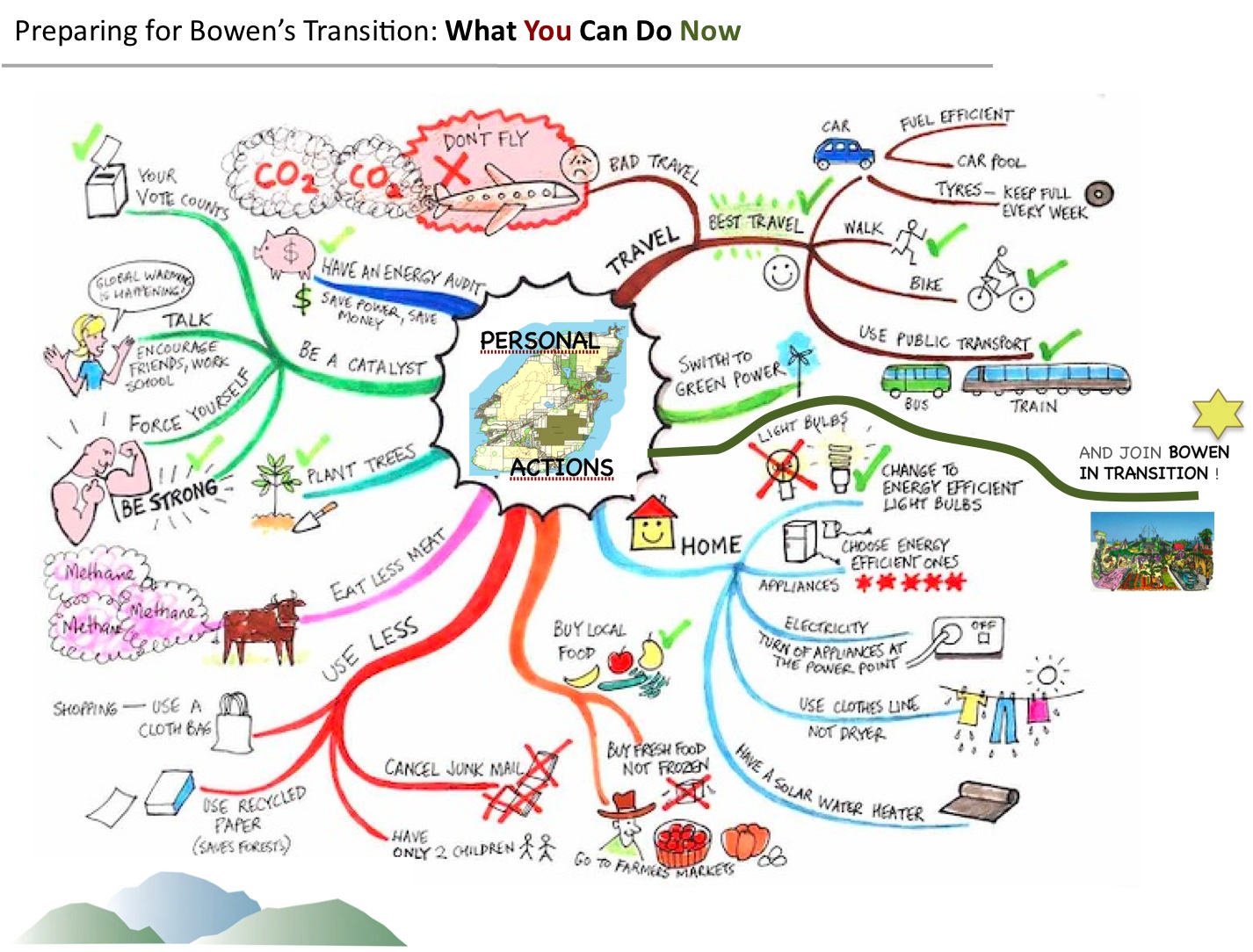 There is lots more in the Training for Transition course, which I understand is now being taught in countries all over the world. Much of the remainder of the course is focused on (i) the “heart and soul” issue (dealing with, and helping others deal with, the grief and sense of hopelessness that overwhelms many when they realize what is at stake and how hard the task ahead is, and (ii) how to initiate a Transition program in your community, traps to avoid, how to engage others, and how to “trust the process” to run without centralized management or hierarchy.

There were four issues that came up for me during the training, that were either very surprising or remain unresolved in my mind on how to deal with them; if anyone has any experience or thoughts on them, I’d welcome your comments:

1. The degree to which the program depends on acceptance of the Myth of Causality (that changes in beliefs will necessarily produce changes in behaviour and hence changes in results achieved by the program). My concern is that in many cases in complex systems I don’t think belief change is sufficient to bring about behaviour change, nor is behaviour change always sufficient to bring about significantly different results from business as usual. For example, many people have come to accept that significant climate change risks lie ahead, but believe there is nothing they can do, or that it’s governments’ job to “fix” the problem.

2. The claim that there is a Tipping Point beyond which a community consensus on the validity of assumptions and actions is sufficient to basically blow away the skeptics and deniers, and produce broad-based support for even radical projects and programs based on those assumptions or actions. The numbers tossed out for this Tipping Point were 15-20% of the population. I’m not so sure this is enough. In the US, a majority favour universal publicly-run health care and publicly-funded election campaigns, among many other progressive ideals, but inertia, and campaigns by a small but wealthy and powerful minority, have prevented any of these widely-supported changes from occurring.

3. How do we deal with the enormous challenges that we face in any attempt to bring about radical change quickly:

4. My astonished realization that most young people attending the Transition training do not seem to feel the degree of grief, pessimism, and hopelessness that pervades the “heart and soul” of the boomers (who tend to make up the majority of Transition leaders, from what I gather). What is behind this generation gap – boomers’ exhaustion and cynicism, or young people’s naivety?

I think these four issues are absolutely critical to the success of the Transition Movement beyond its current early stages. Nevertheless, the momentum the movement has is remarkable, and it’s catching on all over the globe.

More on the subject of Transition as we move forward with our Bowen program.

Thanks to the course leaders Lena Soots and Bill Aal, their support staff, and all my fellow Transition training participants, especially Bowen’s Carol MacKinnon, Don Marshall, and Bob Turner.

11 Responses to Bowen in Transition