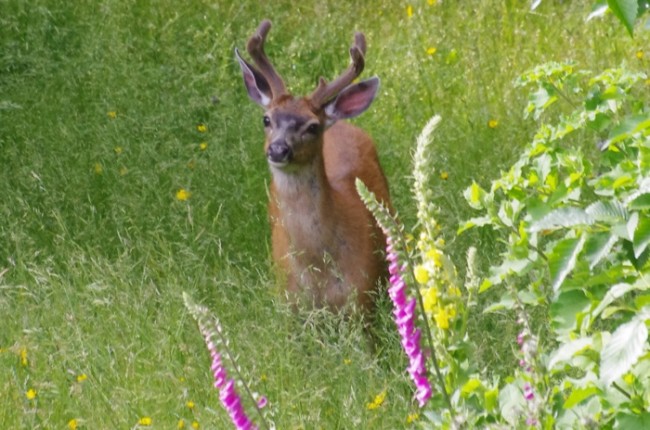 A member of my community, visiting my yard yesterday

I‘ve signed up, somewhat reluctantly, for Google+, the latest foray by Google into the quagmire of social networking. Given the failure of Orkut, Buzz and (the one I really liked) Google Wave, you’d think I’d know better.

Google+ (it’s interesting that even the Google search engine doesn’t seem to know what to make of “Google+” — maybe a serious naming gaffe here) has a mix of features, most of them recycled and/or Facebook-like, but two of them are new. The first of these is Hangout, an app that lets you quickly announce to select lists of people that you’re “hanging out” right now in a video chat, so that up to 10 people from those lists can “drop in” and join the chat. The app appears quite intuitive and a definite improvement over existing free videoconferencing tools.

The second of these are “Circles” — your designation of the people you care about, categorized any way you want (there are preset categories for friends, family, acquaintances, work/professional colleagues and “following”, but you don’t have to use them). These are analogous to the “groups” in a GMail contact list. You can choose to send stuff, or make your stuff visible to, people in any or all of your designated Circles, or to the Public (which means it will go to all of your circles plus anyone who has listed you in their Circles, even if you haven’t reciprocated). You can even choose to send it to Extended Circles (the people in the Circles of the people in your Circles). The stuff you can send includes simple text (Twitter-like, but not limited to 140 characters), photos, videos, and links to your own posts and others’ web pages you think would be of interest to your Circles.

An intriguing design twist is that, while people are notified when you have added them to one of your Circles, they are not told which Circle. It could be a Circle of “Very Sexy People” or a Circle of “Morons”, and they will never know. Some users are developing an optional feature that will notify you of which Circle someone is putting you in, or even let you negotiate it. It’s also interesting that Circles need not be synchronized or reciprocal — you might have 6 people in one of your Circles, none of whom have you in their Circles (or they may have you in a very different configuration of Circles). It will be interesting to see how this will evolve.

Everything you send enters the “Stream”, and what you see on your Google+ home page is the combined Stream of all the people in any or all of your Circles (Facebook-style, with the ability to add comments and replies).

I ended up putting most of the people who are in my Gravitational Community, shown on the right sidebar of my blog, in my ‘Friends’ Circle on Google+ (even though most of them are not yet using Google+, I can still add them and, if I so choose, posts in my Stream will be e-mailed to them in the meantime). This list of about 70 people is a subset of the ‘Friends’ in my GMail contacts list. I sync’d them up a few months ago at the same time that I slashed my GMail contacts list from over 2000 people to about 400.

When I added my Gravitational Community to my Google+ Circles I noticed a few things. First, my GMail ‘Friends’ list has about 40 people on it who are not shown in my Gravitational Community. A surprising number of these people are people I have met in person. In fact, I have met a larger proportion of these ‘non-Community Friends’ face-to-face than I have my ‘Community Friends’. In addition, my GMail contact list has over 40 people who live on Bowen Island, where I now live, people I really like but have not classified as ‘Friends’. Why is that?, I asked myself.

Both the people on my ‘non-Community Friends’ list and the people on my ‘Bowenfolk’ list are, if I were to be honest, really acquaintances, not friends. I feel a bit guilty about my relationship with them: I like them all, and they seem to like me, but there just isn’t enough affinity between us to make me care enough about them to want to spend my time with them. I am starting to value my time much more than I used to. I am concerned that, in doing so, I may have closed myself off to new relationships, undervaluing (as idealists are prone to do) relationships with people who I’ve come to know quite well, and overvaluing those with people (due perhaps to their powerful online presence) who I don’t know well at all. Perhaps my idealism is preventing me from discovering what real friendship, and real community, can offer. Or perhaps it’s because, although I do like most people, a lot of people seem to have an endless supply of personal “stuff” and an inexhaustible need to talk about it, and I just can’t get myself to care about it; is it me, or are we living in an age of epidemic narcissism?

My Gravitational Community list of 70 people is broken down into 7 categories: Artists, Community Makers, Entrepreneurs, Healers, Post-Civ Doomers, Storytellers and Teachers. A number of readers have told me that they were flattered to be added to this list, but many have also bristled at the category they were listed in (and are dubious whether I should have categories at all). I put this down to my propensity to look for patterns in large groups of data (a list of 70 people is, to me, a large group). But most of all I think the categorization answers what is an essential question for me: Why exactly do I care about these people?

I wondered why I didn’t make these 7 categories into 7 separate Circles of Friends on Google+. I concluded it was because the categories don’t have any real bearing on what I want to communicate with these people about. This got me wondering what use Google+ would be to me at all. I use Facebook and Twitter almost exclusively to republish/link to my blog posts. Why would I use Google+ any differently?

My blog is my online presence. I use it to think out loud and to seek out extraordinary people who have been blessed with the curiosity, critical and creative thinking skill, and the luxury of time to learn about what is really going on in the world, and to imagine how we might make it better. What does Google+ add to my ability to do this? If my Gravitational Community of 70 people are the people I really want to spend my time with, what’s the best way to use that precious time with them — Reading/writing Google+ Streams? Impromptu/themed Google+ Hangout video chats? Whirlwind tours of face-to-face meetups? How do I make the people in this Gravitational Community the real friends that technology keeps promising they could be?

I’ve also begun to realize that my reticence to spend much time using other social media, and even to reply regularly to comments on my blog posts, comes down, I think, to the fact that I’m tired of talking. I’m conversed out. I’m open to new, actionable information, and to novel, credible, well-thought-out ideas on what we might do to make the world a better place, but that’s about all the bandwidth I have these days for conversation.

So I’m spending about half of my time these days just hanging out with people I love, extraordinary people who I know get what is happening in the world and are working in their communities on what is needed. I’m not talking much with them, just enjoying their company, in various forms of play. How do I reconcile my stinginess with social networking time, and my stinginess with time for acquaintances who are accessible enough to become true friends, with my willingness to fritter away half my life in play?

I have attributed this in previous posts to laziness, and to exhaustion, but I’m not sure it is either. Pollard’s Law: We do what we must, then we do what’s easy, and then we do what’s fun. This is not only human nature, it’s the nature of most intelligent species, and it’s been an enduring evolutionary success for millions of years. So now that there’s little I “must” do, my appetite for relaxation and fun is inexhaustible. I just want to play all the time.

The other half of my waking hours is split between time on various work projects I believe in (which I’ll be writing about more here), and time spent alone on this beautiful island. That “alone” time is also spent in various forms of play. It’s part of my journey, I think, to become present, to become who I really am. But it’s also fun, and easy. My life is good, more full of joy and love and peace than it has ever been, and I have given up beating myself up for not saving the world, which cannot be saved in any case.

This entry was posted in Our Culture / Ourselves, Using Weblogs and Technology. Bookmark the permalink.

5 Responses to Google+: On Communities, Circles, Friendship and Love