The Top 10 Most Common Mistakes in Consensus Process, and How to Avoid Them 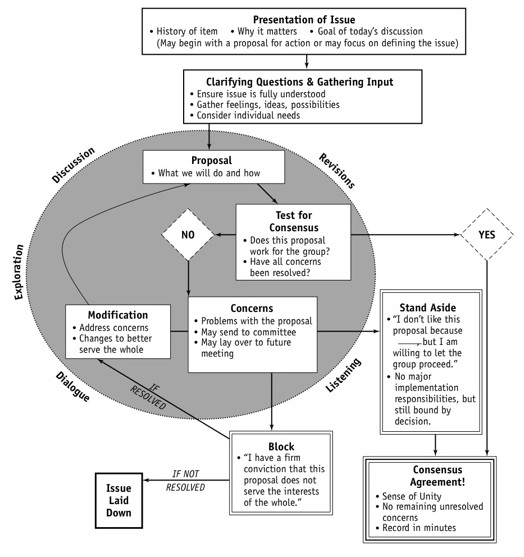 [Last month I posted an article entitled When Consensus Doesn’t Work. This guest post by Tree Bressen describes situations where consensus can and should work, but gets derailed, and how such situations can be avoided. Consensus Decision-Making is a group decision-making process that seeks not only the agreement of most participants, but also the resolution or mitigation of minority objections and concerns. Readers not familiar with the process and terminology of consensus might want to read this overview, or Tree’s more extensive explanation of consensus, before reading this article.]

Blocking because you disagree, object, don’t like the proposal, it doesn’t match your personal needs or values, it goes against tradition, you’d have to leave the group if it passed, etc.  Also includes premature blocks, where someone threatens to block if a group explores a particular direction.

► Consensus only works when the power to block is restricted to concerns that are demonstrably based in the core principles of the group.  Consensus means giving a fair and heartfelt hearing to substantive points—it does not mean you always get your way.

► Remember the Stand Aside option exists for people with passionately held concerns and objections.

► Blocking does not have to mean end of discussion.  Some of the most effective consensus groups require the blocker to help work out a solution.

If disrespectful statements or behavior from one another member toward another or the group are tolerated (yelling, sarcasm, put-downs, jokes at someone’s expense, etc.), this degrades the meeting environment for everyone, impacting the whole group’s safety and well-being.

► Set a constructive tone and insist on following it, kindly but clearly putting a stop to any meanness, attacks, undercutting, oppressive ‘isms,’ etc.  We are fully capable of disagreeing fervently with respect.

People’s time and life energy are precious; when this is not respected, they stop showing up.  Prioritize clearly and be realistic.  Reserve the bulk of time for the things that appropriately call for widespread active involvement.

► Put advance time into creating the best possible agenda—and then be willing to shift it if the group as a whole needs something different.

► Avoid lengthy reports (just get the highlights, or put it over email) or announcements (use a big sheet by the door instead, so people see it when they come in and when they leave).

► Provide breaks at least every 90 minutes (and don’t pretend you can have a 5-minute break).

4. Having the Same Person Facilitate and Present Topics

When the facilitator is also the person offering information and context on an issue, it lessens safety for those who may disagree with the general thrust, putting them immediately on the defensive.

► Presenters supply information and context and should be free to advocate.

► Facilitators need to be neutral so that everyone in the group feels supported by them.

► Mixing roles can work ok in small, committee-like groups (8 people or less?); the larger the group, the more need for facilitator neutrality and formal roles.

5. Starting from a Proposal, Instead of an Issue

In situations where people want to feel fully empowered and included, any overly developed proposal on anything important will inevitably evoke resistance.  At that point, the recipients of the proposal feel scared that they’ll be steamrolled, while the developers of the proposal feel unappreciated, and no one is happy.

► For smaller proposals that don’t require many people’s energy for successful implementation, starting from a proposal can be fine.

► For more complex or controversial situations that touch many people, start by describing the situation, and exploring ideas together in the larger group.  A committee can be useful in helping frame the topic, as long as they don’t go too far down the road.  Later once a basic direction is established, a committee might work out details.  Or if the larger group doesn’t easily come to resolution, they may request a task group of people with diverse viewpoints to work together on it.

There’s nothing like a tedious, overly detailed conversation among a few involved people to put the rest of the meeting to sleep while everyone checks out.

► Delegate!  Send the rest to committee.

Leads to inappropriate blocks, situations where legitimate concerns were not dealt with in an integrated way and so the only option left to the person raising it is to block the whole process, which feels rough on everyone involved.

► Allow plenty of time for discussion.  Take the space to really listen to people’s diverse viewpoints and concerns.  Trust the wisdom of the whole.

► If you have time and if it’s important, discuss the matter, then let it sit and settle, then return to it.

► Wait to make the official call for consensus until a sense of unity emerges.

8. Spending All Your Meeting Time in Open Discussion

In general discussion, only the boldest get their voices heard—many others never even raise their hands.

► Change formats (planned in advance or on the spot):  break into pairs or small groups (3-5 people), line up to show the spectrum of opinion, use dot voting, fishbowls, roleplays, write stuff on sheets around the room, etc.  See this handout for a bunch more ideas.

Once something is out on the floor, it belongs to the group, not an individual member.  Thus it’s better to refer to an idea as “the proposal to do X” than as “Jenny’s proposal.”  For this same reason, avoid the taint of “friendly amendments,” a holdover from Robert’s Rules and voting process where you ask the proposer’s permission to modify.  You wouldn’t ask one person “Can i add this bed to the garden?” unless it was their garden; since it’s the group’s common plot, it’s up to everyone whether and how the proposal gets modified.

► Expect every proposal to get modified a lot before adoption.

Failing to accurately record the sense of the meeting can mean hours of lost group work.  Don’t record verbatim who said what, because it’s too long for others to read later and it ties issues too closely to personalities.

► Make sure the decision and reasons for it are written clearly for the records.  Record any stand asides (names and reasons), and tasks for implementation (who will do what, by when).

3 Responses to The Top 10 Most Common Mistakes in Consensus Process, and How to Avoid Them