The Metamovement: Moving Beyond Marches and People in the Street 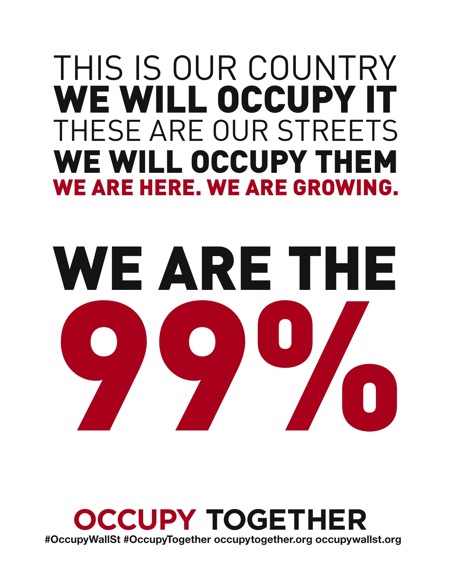 [The “Metamovement” is Umair Haque’s collective name for the various global pro-democracy, anti-corporatist movements that have sprung up all over the world this year: the “Occupy” movements in over 400 cities, mostly in the Americas, the parallel European “Indignant” movements that began with the  15M protests in Madrid, Spain attended by over 100,000 people last May, and the “Arab Spring” movements in the Middle East nations.]

Monday evening I attended the General Assembly of Occupy Portland. The group there now consists of about 600 people, with perhaps 200 camping in the “occupied” park, 150 (including both campers and non-campers) showing up for the daily General Assemblies (decision-making and information meetings), smaller numbers attending a host of educational, planning and protest events, and the full number attending less frequent marches and other high-visibility events.

Last evening (Tuesday) I attended the General Assembly of Occupy Eugene (Oregon). The group is about half the size of Portland’s, though attendance at their General Assembly was almost as high. The Eugene group is in close communication with the Portland group and have adopted a number of the same operating protocols.

It’s amazing to see the self-organization and self-management of the Occupy groups. Rotating groups of skilled facilitators have come together and voluntarily convene and facilitate the General Assemblies. They are using established facilitation processes (consensus decision-making and rules of procedure that are vastly more inclusive than the rules used in meetings convened by the 1%), but they have had to tweak and evolve the processes on the fly to suit large groups of people who don’t know each other and which change day-to-day. They have also had to educate the large number of attendees at General Assemblies on how the process works — a huge challenge — and also make clear to both participants and media that they are neutral facilitators, not leaders or spokespeople for the groups (in fact the groups have no ‘leaders’ or ‘spokespeople’, much to the exasperation of media, police and authorities). Occupy Portland, like other Occupy cities, has posted their evolving General Assembly consensus process on their website, so that other Occupy groups can adapt and learn from them.

The self-organization and self-management extends far beyond meeting and decision processes. Each Occupy group has evolved committees that look after food (that must conform to local health regulations, so that there is no excuse for police or other authorities to shut them down), cleanup, water and sanitation, first aid, mental health, education (some Occupy groups offer child care facilities), police liaison, safety and security, recreation, arts and entertainment, engineering, maintenance (there is a plan and a fund for repairing any damage done to the occupied premises in Portland), information collection and dissemination, outreach, event planning and all the other essential functions of a small possibly-permanent human establishment.

It is amazing to watch the groups use the so-called ‘human megaphone/microphone’ to get the attention of a large and dispersed Occupy group quickly. If there’s an urgent announcement, the announcer will shout out “Mike Check!” and everyone in the vicinity will immediately stop talking and repeat, 5 words at a time, what the announcer is saying, so that everyone in the area can hear it. The privilege is not abused. I have seen it used effectively to alert the group that there is an angry dispute occurring (“Mike Check Peacemaker!” tells the members of the Peacemaker committee where the altercation is and that their presence is needed), and I have also seen it used to alert the group that there is a police presence in the area (“Mike Check Legal!” tells the members of the Legal and Safety committee that they need to get there immediately to witness and mediate any interaction between the group and police).

Equally impressive is the education that is occurring, with daily training in subjects like conflict resolution (especially dealing with people with mental disturbances or under the influence of alcohol or drugs), facilitation, first aid and legal rights, the degree to which low-tech workarounds are emerging to deal with situations as they arise (e.g. hand signals to convey a sense of a large group’s response to what is being said), and some of the technologies (like livestreaming) being used to broadcast, track and record events as they occur.

THE CHALLENGE OF BALANCING GROUP AUTHORITY AND INDIVIDUAL AUTONOMY

From what I have seen, the major challenge the Occupy groups are dealing with is about who is authorized to do what on behalf of, or binding upon, participants, without infringing on individual participants’ autonomy. For example, if someone wants to organize a march, does it need to be put forward as a proposal and agreed to by consensus of the whole? Since it only needs to be agreed to by consensus if it is put forward as a proposal at a General Assembly, does this encourage people to circumvent the collective decision-making process by just saying “I’m going to do this — who’s with me?” instead of putting forward a proposal to the group?

And what about committees?: Since anyone can form a committee, what authority does a committee have, if any, and if it has no authority (except as granted at a General Assembly through the proposal process) what is the point of its existence (it would seem in that case to have accepted responsibility without commensurate authority, which can quickly become untenable)?

The general sense seems to be that matters that affect the entire group should be subject to discussion and agreement by proposal at a General Assembly. But what exactly does “affects the entire group” mean?

There have been cases in the Occupy movement of marches and other actions that have been approved by consensus at a General Assembly, others that have failed to achieve consensus (in large Occupy groups, there is a fallback to 90% approval if consensus cannot be achieved, but that means if only 85% of a group agrees to an action, it is not approved), and still others where a march or other action was just announced at a General Assembly or elsewhere, without being ‘proposed’ for consensus discussion at all. And some of these ‘unproposed’ marches were ‘endorsed’ by a committee of a General Assembly. If the march or other action turns into a debacle, does it really matter whether it was ‘proposed’ (and agreed to) or not?

Similarly, there are committees that have received recognition by General Assemblies (in that they are announced there, and make regular committee reports there), but there is no clarity on where the authority of these committees begins and ends. Communications committees have been approached by media for comments on various matters, for example, and have (inappropriately, in my opinion) sometimes proffered comments that they believe consistent with the principles of the group. The correct answer to “Is Occupy (name of city) opposed to the use of violence?”, for example, is “Occupy (name of city) has not expressed a consensus opinion on that subject”.

It will be interesting to see how the Metamovement evolves processes and positions on matters of authority, responsibility, representation and power. These are issues, after all, that are at the heart of the Metamovement’s dissatisfaction with the de facto rule by the corporatist 1%.

George Lakoff has suggested a ‘frame’ for the Metamovement, which he argues is necessary to prevent the media and others framing it for us. His frame: “We love America. We’re here to fix it.”, with the subordinate message “The Public is not opposed to the Private. The Public makes the Private possible.” The main message is to deflect accusations that the Metamovement is selfish, negative, unpatriotic and destructive. The subordinate message to is deflect accusations that the Metamovement wants something for nothing, that government is not inherently part of the problem, and needs to be part of the solution. This is the message that Elizabeth Warren has been pounding home in her Senate seat campaign.

It is encouraging to see thousands of people in hundreds of cities around the world marching in the streets in solidarity for the 99% of the population disempowered and disenfranchised by despots and corporatist elites, pulling the strings of government and making all the key political, economic and social decisions in our world.

But in order to convince the despots and elites that we really are the 99%, we need to engage those who are unable, because of fear, or lack of access or opportunity, to join us in the streets. More than that, we need to engage the large number who have given up on reforming the system, or been so beaten down by illnesses, or by the dysfunctional education system, the propagandizing media, and endemic political oppression in their countries and communities, that they are not even aware of our message.

How do you think we can do this? I’d welcome your thoughts and will share them with the Metamovement groups.

Here are a couple of ideas I came up with:

THE METAMOVEMENT’S NEXT STEPS: THREE TYPES OF ACTIONS BEYOND MARCHES

It seems to me that actions proposed by the Metamovement will fall into three categories:

A. Demands of Government: Actions that need to be taken by governments and regulators,

B. Street Actions: Actions that the people in the Metamovement can do physically during the occupations, both to draw attention to our message and demands, and to demonstrate our collective will, and

C. Ongoing Local Initiatives: Actions that the communities of the Metamovement need to take responsibility for ourselves, on an ongoing basis, to begin to create a new economy and society and show the way to a new, community-based way of living, in which most power and responsibility will be vested. These initiatives would be local, but coordinated with those of other Metamovement communities.

If we were to use this scheme, we could start to identify actions of each of the three types (Demands of Government; Street Actions; Ongoing Local Initiatives) to advance each of the 14 objectives. These might help bring direction and focus (and sustainability) to the Metamovement.

Here’s a 3 x 14 table we might use to define and sort these various actions. I’ve filled in some of the cells with a few ideas I’ve had, or which others I have spoken with have employed or suggested.

What would you add? Are there objectives missing? What else should we be demanding, doing, and self-organizing for ongoing community-based work? How can we build on the Metamovement phenomenon to start to achieve the objectives that 99% of us believe in, that the current power structures are disinclined to pursue?

[Belated thanks to Bruce Campbell for pointing me to Umair Haque’s article on the Metamovement.]

13 Responses to The Metamovement: Moving Beyond Marches and People in the Street