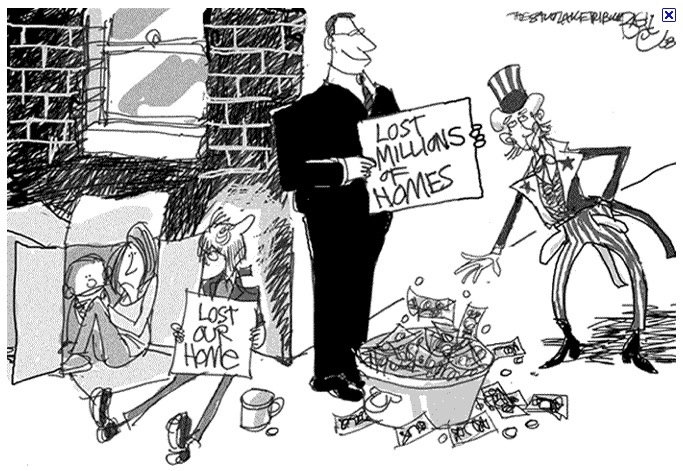 The Occupy movement has focused public attention on the vast and growing disparity of wealth and power in the US, and increasingly in other affluent nations. You’ve all seen the statistics — essentially all of the increase in real wealth and income over the last 40 years has accrued to less than 1% of citizens, and for the other 99% real wealth and income have declined, in some cases precipitously. As a result, nearly half of all Americans, and well more than half of American children, now live in poverty or near-poverty. There is essentially no social or economic mobility left in US society — if you’re born rich, you will surely grow richer, and if you’re born poor, you will surely grow poorer. The American Dream, and the American middle class, are dead.

This dramatic and accelerating shift has not been an accident. It is the result of deliberate policy decisions that have prevailed since the Reagan/Thatcher era: Huge subsidies, bailouts, tax loopholes and tax cuts for the rich and wealthy, near-zero interest rates (well below the real cost of living, masked by fake government statistics), massive deregulation (and non-enforcement or cheap out-of-court settlement of horrific regulatory violations), dismantling of employee benefits, crippling of unions and workers’ rights, incentives for offshoring and laying off domestic employees, and on and on.

The rich and powerful now own the politicians of all major parties, almost all of the large corporations that control much of the economy, and the mainstream media, and through them they have altered the financial, political, economic, tax, regulatory, information and education systems, globally, to suit their own purposes and entrench and further enlarge their power, wealth and privilege. As long as this elite continues to wield this much power, the situation will continue to get worse. And as renowned management consultant Charles Handy has said: No one gives up power willingly or voluntarily.

So how might this power be shifted? How can we radically redistribute income, accumulated wealth and power from the 1% to the 99%? The likelihood of revolution seems remote, and revolutions rarely achieve democratic or egalitarian ends anyways — the power and wealth are simply redistributed to a new elite. Political reform seems equally improbable, since the political systems (and the use of bribes, first-past-the-post voting, interference with minority voting rights, election-rigging, super PACs, paid media smears of establishment critics, backroom deals, threats from slimy corporate lawyers, and gerrymandering) ensure that there is no choice for voters that is not endorsed by the 1%.

We could wait until the economy collapses, at which point governments, banks, large corporations and the media will also collapse. The wealth and power of the 1% will then largely evaporate, and the elite will take what’s left of their money and retreat behind their gated mansions, as the suffering of everyone else mounts.

We will of course continue, no matter what happens and no matter what else we do, to try as networkers and teachers and writers to inform the majority of the 99% about the criminal actions and social and environmental atrocities that have allowed the 1% to acquire and entrench their wealth and power, and as activists to undermine, mitigate and undo some of their most outrageous damage and injustices. But this is a tall order: Decades of propaganda and educational neglect have brainwashed most citizens to believe the rich and powerful have earned their privileges legally and ethically, and that there are opportunities for anyone to join them. And that until/unless they join that elite the average citizen isn’t listened to and can’t change anything anyways.

Thanks to the Occupy movement, the Indignant movement and the Arab Spring movement, it is dawning on many people that the massive disparity and inequity of wealth, income and power in the world is not because some people are smarter or luckier or harder-working than others, but because the 1% have cheated, bribed and stolen the wealth of the 99%, and the natural wealth of the Earth, and used it to brutally and relentlessly consolidate their power over all of the systems of modern society, on a global basis. That, in effect, our society is now run by a privileged, in-bred and self-perpetuating elite of gangsters and banksters — an illegitimate, unelected, undemocratic, criminal elite. One that is running our economy off a cliff, and desolating our world to the point of collapse.

Still, the conditioned response of most people, even those most oppressed and those most aware of the true extent of malfeasance that has led to this state, is a “Well what can we do anyway?” shrug. “It’s always been this bad” resignation and “It’s not really that bad” denial play right into the hands of the elite. That is why I predicted that (although I think there is still considerable life left in it yet) the Metamovement will ultimately fail. No one gives up power willingly or voluntarily. And (almost) no one is prepared to make the powerful give it up involuntarily.

The people of the world’s struggling nations (and the homeless in affluent nations) are perhaps a step ahead of the rest of us in this cycle of growing disparity and hopelessness. They have lived with this reality longer, and while there are still millions, perhaps billions longing and dreaming of joining the elite, there are few in denial that the rich and powerful are substantially gangsters and banksters dressed up and posing as caring democrats.

If we can, like them, move past denial, what would it then take to move past outrage, and move to take back our political and economic systems? Is “involuntary” redistribution of income, wealth and power in a morally bankrupt political and economic system necessarily violent? Is it even possible, or, as Hendrik Hertzberg at The New Yorker has written, are the huge, massively-complicated, centralized, necessarily-bureaucratic systems that underpin our civilization themselves the problem — is their very size their undoing? Could we really bring about change, for example, by revoking the rights of corporations and making the elite individuals hiding behind them personally and fully liable for their corporations’ (and banks’, and political parties’) illegal activities? Or would their armies of well-paid lawyers simply prove, as many believe, that the rich and powerful can get away with anything?

And then what? When corrupted courts exonerate the criminal elite, will that elite be spurred to even more extreme and transparent outrages, and will a chastened citizenry give up once and for all and just struggle along as best they can? The failure of most of the public to become outraged at the Citizens United case, or other egregious highly-publicized pro-corporatist court decisions, is disturbing.

My sense is that most citizens (and the proportion is growing with each new generation) intuitively feel that the systems under which we are forced to live and work are hopelessly broken and that the elite is too well entrenched for there to be any hope of fixing these systems through reform, by “working within the system”.

The work of anthropologists suggests this is how civilizations often end. When the majority have given up believing in them and in their possible reform, but are not yet ready to walk away from them, system collapse becomes inevitable. The coming Long Emergency, as our unsustainable economic, energy and ecological activities cause all of our civilization’s systems to repeatedly reel and stumble, and finally fall, will give most of us, I think, the impetus we need to walk away, at first to the edges, where the homeless in affluent nations and the vast majority in struggling nations are already living — outside the purview of the “official” political, economic and other systems, and then off the edge, to begin to create new systems from the ground up. I see all of this happening, in waves and fits and starts, over the next half-century. We will have no other choice.

Until then, the gangsters and banksters will continue to rule, though more and more uneasily, as their own dependence on many of these systems results in them slowly or quickly losing most of their wealth and power. And even then they will have more than most of us could ever dream of.

So we wait. And do what we can, in the meantime, both to mitigate as much as possible the most egregious ills of the elite machine, and to begin to begin to learn what we must learn to start again when that machine completes its desolation of our planet, and implodes.

9 Responses to Gangsters and Banksters