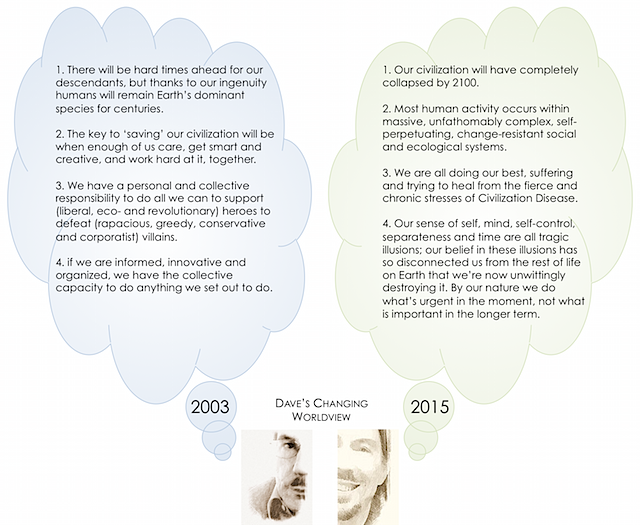 Human beings, it seems, change our worldviews — what we value and believe to be true — pretty slowly. When I started this blog 12 years ago, my worldview was pretty left-of-centre orthodox, as you can see on the left side of the above sketch.

A dozen years later my worldview has radically shifted, as shown on the right side of this sketch (see the footnote if you want a little more elaboration on these ‘new’ views). Some of the shifts came about from personal research and study, or from reading. Other changes came from some place deeper, an intuitive sense and knowledge that was not intellectual, and which I have come to trust more and more as each new intellectual discovery confirms what I intuitively already ‘knew’. Whether we’re conscious of it or not (and we’re mostly not), we are connected with all life on Earth and constantly ‘learning’ from it. I don’t see that as spiritual; it’s how life on that planet has evolved so successfully and in such a nuanced and balanced way over two billion years, largely without the dubious benefit of large ‘individual’ brains. This planet has a collective intelligence, and it’s a lot smarter than we can ever hope to be.

These radical changes in my worldview have been difficult to internalize and come to grips with. But what’s been even more challenging is how dramatically they have altered my take on just about everything I encounter, think about or do in my life. Everything looks utterly different through this raw new lens. The cognitive dissonance between what I see through this lens and what almost everyone else seems to believe (and the media present as ‘truths’) is staggering.

So I can appreciate that our political, economic, health and education systems are dysfunctional, grossly inequitable and substantially corrupt, but (through my new worldview) given the importance of preparing for a world in which these systems will soon have utterly collapsed, I can’t get excited about attempt to reform the present ones, or even stirred to outrage at their failings. The bridge is falling; what does it matter now who’s to blame and what might have been done to strengthen it?

And through my new worldview, I can’t bear listening to idealists tell us about how This Changes Everything, when I know how complex systems function and how nothing (within the capacity of the human species, anyway) changes everything (or really anything very much, at any scale or for very long or even necessarily for the better). Have we forgotten what happened after the Arab Spring, the fall of the Soviet Union, the “liberation” of Afghanistan and the Obama Campaign of Hope already?

But for those whose current worldviews mirror what mine was in 2003, I can appreciate why they believe, urge and do what they do. And I’m not arguing that my current worldview is ‘better’ than my old one, or than anyone else’s, because, as I say, we’re all on our own lonely path to trying to make sense of the world, and if we come to the conclusion that our worldviews are in sync and we make sense of the world the same way, we’re probably deluding ourselves. We can’t be other than who we are.

And in any case, our worldviews are only placeholders, parts of a flimsy and transient and indefensible model of a reality that will ever remain far beyond our understanding. They are playthings, not of much real use in the world anyway, and we take them far too seriously. If we are lucky, some of us (probably not humans) will vaguely appreciate that there is just one presence, one consciousness, and that all the lovely and sacred and sickly and destructive manifestations of that consciousness are just brief walk-ons in the play of life, of no enduring consequence.

But then, that’s just how I see it through the lens of my current worldview. Ask me again in another 12 years.

Note: Here’s a bit more on the elements of my ‘new’ worldview, in case you’re curious:

1. Our civilization will have completely collapsed by 2100. This collapse is part of the 6th Great Extinction of life on Earth, which began with the extermination of large mammals 12,000 years ago, and it will be accompanied by runaway climate change, the exhaustion of easily and inexpensively accessible natural resources, and the collapse of the unsustainable debt-driven industrial ‘growth’ economy.

2. Most human activity occurs within massive, unfathomably complex, self-perpetuating, change-resistant social and ecological systems. As such, we have very little control over our lives, internally or externally, and can’t hope to predict or significantly influence our future or our society’s trajectory. Complex systems evolve to resist attempts to reform or replace them (their equilibrium has been hard-won), and it is only when they become unsustainable and collapse that space is created for new systems to emerge.

3. We are all doing our best, suffering and trying to heal from the fierce and chronic stresses of Civilization Disease. The enormous stress that civilization culture imposes on us inevitably makes us physically and emotionally ill, but this culture’s cruel messages are that (a) ours is the only way to live and (b) we are responsible for our lot in life. Healing begins when we realize these messages are untrue and that we are all struggling to heal, and in the meantime all trying to do our best, what we sincerely believe is best for those we love and for the world, under trying conditions.

4. Our sense of self, mind, self-control, separateness and time are all tragic illusions. Our brains evolved to help the trillions of cells that comprise ‘us’, to detect features and dangers and hence ensure their collective survival; our sense of a separate, in-control ‘self’, centred in the mind, is an unintended consequence of this evolution of large brains, an accident, that our culture has learned to exploit to keep us all in line so this culture can continue. We’ve hence lost the sense of connection and of being a part of all life on Earth, and this has allowed us to unwittingly destroy the systems that all life depends on. And by our nature we do what’s urgent in the moment, not what is important in the longer term, so we have no capacity to change what we are doing.

19 Responses to I’ve Changed My Mind