When You’re In Love, Nothing Else Matters 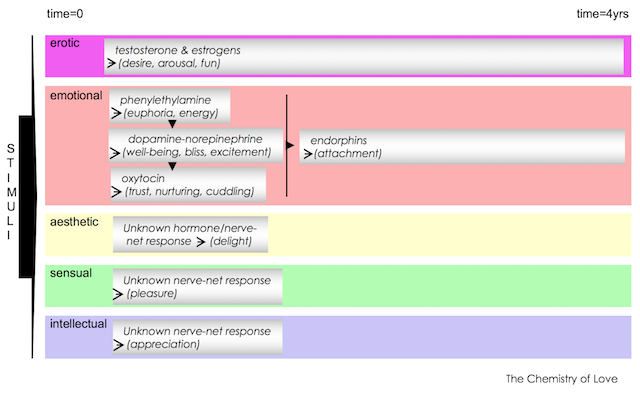 At a retreat this past weekend I was contemplating the various times in my life (there haven’t been that many, at least that I can recall) when I have had ‘glimpses’ of what life is like without the affliction of the self. In other words, the moments when my ‘self’ dropped away and there was no ‘me’, no time, nothing separate, just the liberating, wondrous realization of all-there-is. I described my last such glimpse, last spring, this way:

I thought about these various ‘glimpses’ and asked myself if there was a pattern to them. Was I, as some have reported in moments of ‘awakening’, utterly exhausted, shaken to my core, and therefore ‘open’ to seeing? Was there something about where I was, what mood I was in, what had recently happened to me, that connected these remembrances?

And then it hit me: Every moment of ‘liberation’ from the self, every moment of realization of all-that-is without the veil of separation, occurred in a moment of limerence.

Limerence is an ambiguous term, so let me define it simply as I have experienced it: Limerence is the whole-body experience of time-less euphoria, most often during the early stages of some new love. It is a purely chemical, utterly irrational experience. No one can control its onset or intensity or hope to understand or make sense of it. It has essentially nothing to do with the actual ‘object’ of that new love, when there is one. In the moment, ‘it’ (love, or whatever you want to call it) is all that matters.

I’ve written before about the ‘Chemistry of Love’ and the chemical cocktail, illustrated above, that floods the body from the earliest to the later, less euphoric stages of love. In the earliest stage, some mix of phenylethylamine, dopamine, norepinephrine, oxytocin, testosterone and estrogens might be involved (the state of the ‘science’ is abominable).

The obvious question is what evolutionary purpose this chemical ‘madness’ serves. The obvious (but possibly incorrect) answer is that it advances the procreation of the species, so this chemistry endures from generation to generation.

One of its effects is that, at least initially, it pretty much obliterates the ‘self’ — the focus of attention is wrenched away from one’s self to some combination of the (idealized, fictitious) love ‘object’ and the sheer mad wondrous experience of the feeling itself.

In creatures afflicted with ‘selves’, the mind then fiercely intervenes and tries its damnedest to reassert the appearance of ‘control’, and what follows can be pretty dreadful — obsession, feelings of terror of ‘separation’ or ‘loss’, jealousy, anger, grief, despair — the whole gamut of painful emotions that accompany the mind’s/self’s invention of stories to try to make sense of its misperceived reality.

So when I use the term limerence here I’m referring only to those ‘self-less’ euphoric feelings that precede the re-intervention of the mind/self. In those moments, I think, there is an opening, a possibility, before the affliction of the self reasserts itself, for the self to fall away and for there to be a glimpse of what really is, the ‘natural reality’ that creatures unafflicted with selves ‘experience’ normally.

This may be similar to the ‘opening’ to realization that some psychoactive ‘medicines’ purportedly produce.

The philosophy of radical holism (non-duality) that I’ve tentatively adopted suggests that there is nothing the ‘self’ can do to create such an ‘opening’, since that would be essentially killing ‘its self’. I buy that we have no control over what we do, and that there is no ‘path’ that the seemingly separate person can choose to take to realize the folly of its separateness. And I certainly have had no control over (or during) my moments of limerence.

But I’m really wondering if there’s an involuntary door here, or at least a window, since for ‘me’ a ‘self-less’ moment of limerence has seemingly always been a necessary (if not in itself sufficient) precondition for a glimpse of self-less reality. The paradox is that in those glorious, helpless moments of limerence, nothing else matters but that euphoric feeling.