This is what I plan to read, next week, at my father’s memorial: 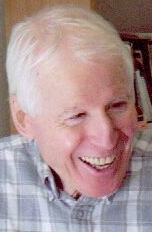 A few years ago, a number of weblogging colleagues and I began a practice of maintaining, and updating once a year or so, the obituary for ourselves we hoped would be able to be read truthfully once we’d died. The purpose of the exercise was and is to focus us periodically on our intentions, on the things we hope to accomplish but have not yet done. I would recommend this exercise to you, because, as Goethe once said, there is power in intention.

It occurred to me as I wrote these words that if my father had written his own annual ‘intentional obituary’ he would never have had to change a word from year to year. He always knew what he was intended to do, set his expectations low, worked hard, and achieved, quite early in life, almost everything he wanted to accomplish. Having done so, he was free to pursue his insatiable passion for learning.

For most of his life this passion for learning was his principal hobby, beyond enjoying music and the arts, and gardening, and he pursued it with a tireless curiosity and critical thinking mind, with the objective of understanding how the world really worked. His learning imbued in him a very progressive worldview, one that was out of sync with that of many of his friends and family, but which made him, for me, a mentor, an example of how to live thoughtfully, courageously, authentically and responsibly, and a sounding board for my own radical ideas. He gave me the courage to be different, to be myself, and he introduced me to the poem by e e cummings that suggested a way of being and doing that he exemplified and that I have tried all my life to emulate:

Almost anybody can learn to think or believe or know,
but not a single human being can be taught to feel. Why? Because
whenever you think or you believe or you know,
you’re a lot of other people:
but the moment you feel, you’re nobody-but-yourself.

To be nobody-but-yourself — in a world which is doing its best, night and day,
to make you everybody else — means to fight the hardest battle which any human being can fight;
and never stop fighting.

My father lived modestly, in every sense of the word, and abhorred conspicuous consumption. He was interested in politics but cared about action, not rhetoric. He measured himself and others on what they did, and what they did not do, rather on what they said or professed. He believed in conserving, in listening and understanding, in helping others, in seeking consensus, and in striving for peace.

He told me once that the true measure of what we do in the workplace is not the physical or procedural or financial outcomes achieved in the short run, since these are always transient. The true measure is what we have demonstrated personally, one-on-one, to others we work with and for, that changes forever what they know, that gives them capacities and competencies and understanding that will last their whole lives and which they in turn will pass on to others, and so on, for generations. That wisdom has guided me in my dealings with work colleagues all my life, and with my children and grandchildren as well, and its intangible product is his lasting legacy, and that of everyone he has touched.

Through his actions and his example I learned how to be empathetic, how to listen appreciatively, the importance of honesty and generosity, and of thinking before you speak, that showing is more effective than telling, that we need to slow down and look and really see what is happening. I learned from him the importance of home, the value of writing and imagination and curiosity and critical thinking, and, in his final months, I learned from him how to let go.

He was, in short, an extraordinary father, in a world where so many fathers are dictatorial, intolerant, impatient, demanding, abusive, ignorant, tactless, lacking in self-knowledge, or simply absent. I will do my best to exemplify the qualities that he did, to be as good a role model as he was, all his life, in everything he did.

There’s a poem by the Canadian poet Oriah, called The Invitation, that’s about being authentic and which reminds me a lot of my father’s advice, so I’d like to conclude by reading it:

I want to know if you can be with joy, mine or your own
if you can dance with wildness
and let the ecstasy fill you to the tips of your fingers and toes
without cautioning us to be careful, to be realistic
to remember the limitations of being human.
It doesn’t interest me if the story you are telling me is true.
I want to know if you can disappoint another
to be true to yourself.
If you can bear the accusation of betrayal
and not betray your own soul.
If you can be faithless
and therefore trustworthy.

It doesn’t interest me
to know where you live or how much money you have.
I want to know if you can get up
after the night of grief and despair
weary and bruised to the bone
and do what needs to be done
to feed the children.
It doesn’t interest me who you know
or how you came to be here.
I want to know if you will stand
in the centre of the fire with me
and not shrink back.

It doesn’t interest me where or what or with whom
you have studied. I want to know what sustains you
from the inside when all else falls away.
I want to know if you can be alone with yourself
and if you truly like the company you keep
in the empty moments.