(remind you of someone you know? — photo posted anonymously on imgur)

Return to Dark Mountain: The current structure of these Links of the Week/Month (starting each set of links with articles on “preparing for civilization’s end”) took form with my first post on the Dark Mountain project. I don’t know whether it’s coincidence or not, but this past week, just when I signed up on their Ning site and mentioned them in Friday’s post, there’s been a flurry of articles on Dark Mountain on many of the blogs I read. About a year ago, Paul Kingsnorth and Dougald Hine began a movement of writers and artists to tell the story of civilization’s current demise, and to imagine possibilities for the world that will follow, a world with a much smaller, Uncivilized human population. Their Manifesto is long, moving and brilliant, and their blogroll and the authors of the first edition of their journal are a who’s who of post-civ thinking.

They describe themselves as artists and as “curators”, rather than activists, and (unlike me) are unapologetic about that. In light of my recent declaration that I am at heart more artist and dreamer than activist and organizer, I’m going to be focusing more of my time on the kinds of things Dark Mountain is doing, so perhaps you’ll see me in the second edition of their journal.

Some of the recent responses to Dark Mountain’s message and activities from some of my favourite bloggers suggest Paul and Dougald might have lost a bit of focus (perhaps I could help? no, forget that):

Should You Move Now Before the Crash?: My fellow “post-civilization” blogger Sharon Astyk has written a fascinating and well-considered piece on whether, in light of the coming collapse of our economy, energy and ecology, it makes sense to stay where you are or move now. She says you should move if:

If we all acted on this list, who would leave your community and who would come to take their place?

Collapse, Transition, Great Turning: Why Words Matter: Joanna Macy “Work That Reconnects” practitioner Carolyn Baker says we shouldn’t be afraid to use the word “collapse” in conversations, even when it may provoke awkward, angry or defensive responses.

More on Walking Away From Your Mortgage: Even the NYT is writing about people who have found new life by just stopping their mortgage payments — for people whose homes are worth less than their mortgage, it can take years for mortgage companies to navigate the huge foreclosure backups in paperwork and legal authorization, and many mortgage companies are now writing off the amount of mortgages in excess of current property value, just to keep from having to foreclose. About time.

UN Urges World to Go Vegan: For all the reasons I cited in my recent post, the UN says a move to global veganism is essential to forestall climate change. Thanks to Raffi Aftandelian and three others (including Sharon Astyk, who thinks the UN is too dogmatic about this) for the link.

Living Lightly: Pay attention and notice when you become upset, and then recognize your judgements and expectations, and let them go, says Leo Babauta. I’ve started trying to do this, and it doesn’t always work, but I am becoming much more aware of when I am upset (anxious, depressed, angry, frustrated, impatient — all the situational reactive emotions), and that in itself is helpful. Thanks to Chris Lott for the link.

Joe Bageant Zen: An apparently angry and depressed Joe Bageant rages at the machine, and then proffers some spiritual advice:

[By] right action in the moment [I mean to] locate one’s heart in that particular day. Then proceed toward the least harm one can discern to do, with full knowledge that we always do harm, whether we intend to or not (the world is full of subtle unintended violence). Eliminate whatever suffering in sentient beings one encounters… Compassion is sublime. Besides, this is what the heart is designed for — to serve as a compass for the spirit. 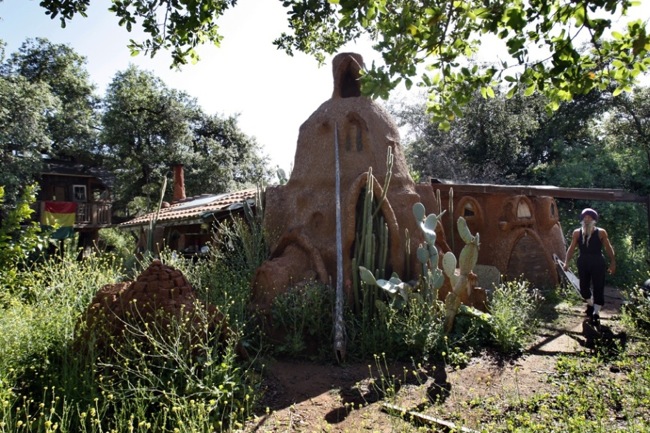 Sculpting Your Own House: Joseph Diliberti built and decorated his own clay house for free, and says anyone can do it (photo above by Allen J. Schaben from LA Times.) Thanks to Tree for the link.

Ten Reasons You Should Start Running Barefoot: Take a look at the explanation from a Harvard prof about why landing on the front of your foot is healthier and more natural than landing on your heel.

Corporations Sue Online Commenters for Telling the Truth: In an ominous development, some of the millions of overpaid worse-than-useless lawyers in the US have started helping corporations launch frivolous, intimidating lawsuits against anyone who criticizes their client company’s products or services online. So much for free speech.

Das Rad (The Wheel): Two rock piles witness human civilization. Subtitled. Thanks to Chris Corrigan (and three others) for the link.

Beatbox Revival: A hit Swedish song brings back the 1970s beatbox. Then, of course, YouTube makers had to show that you can make all those beatbox sounds with your own body. And finally, thanks to a Swedish phone company you can operate your own beatbox online. Great, silly fun.

Little Dee, Second Time: *Sigh* Chris Baldwin’s heart-warming coming strip Little Dee has ended. But you can read it all from the start. Read it to your grandchildren.

First Peoples’ Language and Community Map: For the area now called British Columbia. A wealth of information about Northwest indigenous peoples, their language and culture, prior to the theft of their land by Europeans.

From Michael Meade (excerpt from The World Behind the World); I stumbled on this in an art gallery in Ashland Oregon:

So-called reality is the child of an ongoing love affair between time and eternity. Time begins in “all eternity” and returns there when it needs to be replenished. It only takes a little imagination to break the linear, literal spells of time and arrive back at the Once Upon a Time that is the origin of the soul to begin with.

Not just citizens of the world, not merely statistics without inherent meaning, humans are living metaphors, bodies and spirits conjoined with the glue of the soul and shaped by invisible threads of imagination and story. We cannot rescind this ancient and immediate heritage of imagination, for it is buried in the bones and laced into the body cell by cell. We are imaginative beings doused with eternity before our eyes ever opened upon this earth. From the beginning we see more than we can express and our last words fail to conclude the stories that live through us.

For we are lived through by energies, ideas and emotions that flow from the unseen world behind this world. We are overloaded by our own dreams, saddled with unusual fates and driven by unseen destinies. Were it not for the gravity that rests in our bones and vital organs, we would take flight. Were it not for the tangled relationships of past, present and future, we would escape every atmosphere and become the Unseen.

Despite the collapse of the immediacy of mystery into the confines of history, this down-to-earth world is also a mythic place, an ongoing production fashioned and staged by eternity. Despite the pressing problems and mounting concerns, the issue isn’t so much saving the planet as saving humanity from itself again. When times become dark and difficult the issue for those on earth comes down to living authentically, to authenticating the purpose and meaning already present in each soul.

No solitary idea, no matter how great, no single notion or shared belief can shift the weight of the world towards a meaningful future; but the accumulated vitality of many lives lived more fully might become a meaningful makeweight in the balance between time and eternity. Strange as it may seem, individual consciousness forms the makeweight, and living out the hidden meanings within life helps to balance the weight of the world. Each living being wrapped around an invisible, eternal thread, each a story breaking out of the wall of time to sing its own unfinished song.