I recently had the pleasure of attending a presentation by Betty Martin on how we often allow ourselves to be coerced into something in the mistaken assumption it is consensual, and how we often misconstrue something we do to another person as something we do for them, effectively getting the giver and receiver precisely backwards. She presented a brilliant model of the power politics of personal relationships (including sexual politics) that can be generalized to represent the power politics of all relationships. Here’s the basic model: 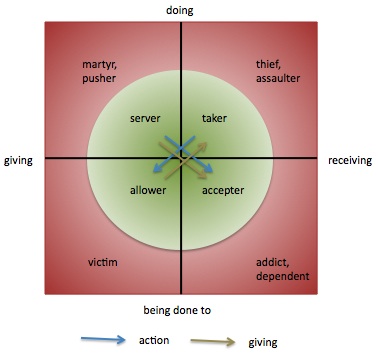 All of these relationships can be consensual. When I give someone a massage, I am the server (giver/doer) and the person getting the massage is an accepter (receiver/being done to). But when I steal a kiss without asking, I am the taker (receiver/doer) and the person I kiss is an allower (giver/being done to). My action, her gift. Provided it is consensual. It is possible to simultaneously or alternatively serve and accept, or take and allow. The green area in the chart is therefore called the Circle of Consent.

When any of these actions is not consensual (i.e. is coercive), the roles are actually different, as shown in the red area in the chart. If I am giving something and doing something to someone without their consent, I am a pusher and the person I’m pushing to is an addict. If I’m doing this against my own will, I am a martyr. Likewise, if I take something against another person’s will, I am a thief, or an assaulter, and the person I am doing it to is a victim, unwillingly giving to me. In a pathologically co-dependent relationship, it is possible to be simultaneously or alternatively pusher (or martyr) and addict, or thief and victim.

The challenge is to identify when what appears to be consensual (inside the green circle) is in fact coercive, when either one party or both parties misinterpret it (or pathologically try to portray it, to the other person or in their own mind) as consensual. The edge of the circle can be fuzzy, and may not be symmetrical. When there is clarity between both parties on who is doing, who is giving, and whether or not it is consensual, then the relationship is healthy and reciprocal. Without that clarity, it may not be.

Example: Two hours of non-stop oral sex, taking turns five minutes at a time, might appear to partner A to be a consensual and pleasurable alternating server/accepter transaction, but to partner B might seem to be a tedious martyrdom to partner A’s sexual addiction. Likewise, partner C’s recurring declarations of love for partner D, with the expectation of a reciprocal declaration or more, might seem to partner C to be an ideal reciprocal server/accepter transaction, but to partner D might seem obsessive and forced, to the point the reciprocal declaration or other expectation causes them to feel the relationship is a martyr/addict one. And partner E’s high expectations (say, for sex, or financial or emotional support, or unsolicited gifts) from partner F might allow thief/assaulter/victim or martyr/addict transactions to be perceived, by either partner E or F, or even both, as transactions within the Circle of Consent when they are not.

As useful as this model might appear, it requires the parties in a relationship to have a high level of emotional intelligence, courage, empathy, self-knowledge and self-awareness, to use it effectively. Those in coercive relationships are often in denial, or ignorant of what is going on, and even if they realize that someone’s behaviour is not consensual, they may not be able or prepared to change that behaviour if the emotional or other rewards of coercion are high.

As I studied this model I came to appreciate that it applies not just to personal relationships but to all kinds of economic, social and political relationships. Most business transactions are, ostensibly, two-way reciprocal server/accepter transactions: the seller is the server and the buyer the accepter of goods or services, and then the buyer is the server and the seller the accepter of money in return. Those in the gift economy trust that reciprocity will occur, eventually, without the need of money as immediate enforcer of that reciprocity.

But many people in volunteer and non-profit work burn out because what began as service evolves into martyrdom. Many businesses use additives to their products, oligopoly, and advertising, to push their customers into dependent relationships and even addiction. Employees allow employers to dictate and take a lot from them (control of their lives, how long they work, even where they live) because the reciprocal gift of job security seems fair, but often that security is illusory and employees become victimized wage slaves.

At a more global scale, the poor, the sick, struggling nations, farmed animals, the natural environment and future generations are all systematically victimized by war, theft, desolation, deprivation and other abuses by the rich, the powerful, war-mongering imperial nations, corporatists, polluters and greedy, thoughtless and idealistic short-termists. In many cases these thieves, assaulters and abusers genuinely thought they were engaged in consensual, reciprocal win-win taker/allower transactions. The mainstream media, for reasons that are complex, frequently encourage that misconception.

This is a fascinating model at all levels of application. But it suffers the same shortcomings of utility when applied at the larger social, political and economic level as it does when applied to personal relationships. It requires enormous honesty, courage, self-knowledge and self-awareness for people to get past denial of the coercive and destructive nature of the systems that industrial society has built, and which sustain us, for now, at our current level of economic prosperity. We mostly don’t know of and can’t imagine another, more consensual system, one based on fairness, reciprocity, openness, sustainability, responsibility, generosity and long-term thinking. Because modern corporations are inherently psychopathic, and because the existing systems are so global, endemic and entrenched, creating a level playing field where new systems could come to prevail is almost inconceivable.

Nevertheless, this model is a powerful way to think about power politics at every level, from personal relationships to global corporatism. It is a common framework that could be used to portray the perceived realities of relationships and transactions, in a way that can lead, eventually, to understanding, appreciation, and remediation of coercion. If only we’re all smart enough, and aware enough, to use it.

8 Responses to Consent vs Coercion