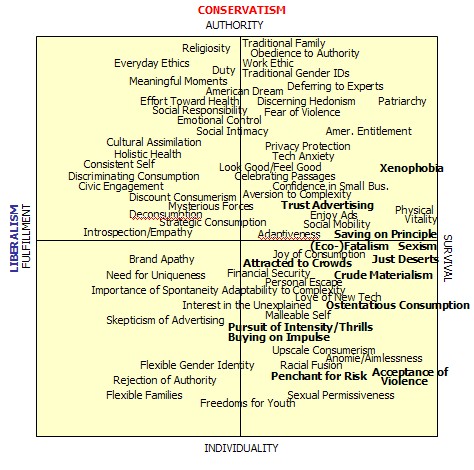 [On the chart above, 110 values surveyed by pollster Michael Adams are plotted according to where they fall on a 2-by-2 grid. The values that (per the survey) have become significantly more prevalent in Americans since 1992 are shown in bold. An acceptance of violence as inevitable, persuasive and cathartic showed the greatest increase of any of the 110 values. There has been a commensurate drop in the proportion of respondents holding many of the values that both conservatives and progressives hold dear (those in the upper left quadrant).] 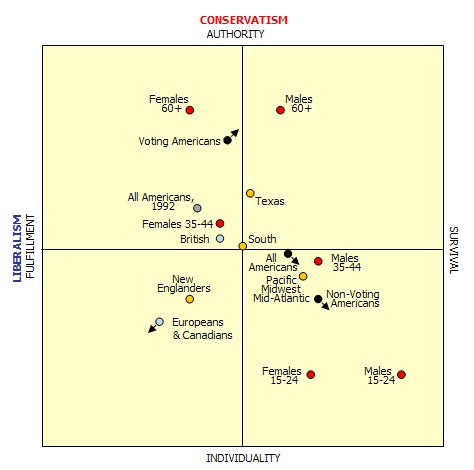 [This chart shows the median position of people in different demographics on the same values map. Note particularly the median values for young Americans. The survey found a growing proportion of Americans disengaged, disenchanted, and fatalistic, but this small plurality is especially pronounced in young Americans of all stripes, races, regions and economic backgrounds.]

On the ferry home the other day I overheard three attractive, well-dressed teenagers (I’d guess 16-17 years old), one male and two females, engaged in one of the most disturbing conversations I’ve ever witnessed. The conversation had three threads, if you could call them that:

This reminded me of an experience I had last year where a group of us in a restaurant witnessed two young (perhaps underage) girls at the bar draped all over two fat, ugly old bikers, kissing them and sucking up to everything they said. My colleagues said at the time that they weren’t as surprised as I was, and that the girls were probably not prostitutes, just “kids” impressed by the machines and the freedom of their riders.

I don’t know why these occurrences had such a strong, negative effect on me. Maybe I live in a different world from most people, and I’m just very fortunate to have lived a gentler life than most. Mostly, they left me with a bunch of unanswered questions:

The book The Fourth Turning has, compared to the Adams surveys, a more charitable view of Generation Millennium (“obedient and conforming”, “team players”, “accepting of authority”, “upbeat”, “hard-working” and “self-censoring”). That view fits better with the impression I have of the teenagers and university students I know. But perhaps I really don’t know what most people are like at all.

3 Responses to Inured to Pain?