Does It Matter Who Is Perpetrating the Destruction of Our World, or Why?

[Keith Farnish thinks it’s useful, perhaps even necessary, to get angry at the perpetrators of the destruction of our world. He believes it can shake us out of our lethargy and our sense of helplessness. I’ve never found anger particularly useful, since I usually end up feeling that the objects of my anger didn’t mean to do anything outrageous, so I feel angry and upset at myself more than at them. But perhaps that’s precisely the perpetrators’ intent: Just as they would have us accept our share of ‘blame’ for the BP Oil Spill, the Alberta Tar Sands and other ecological disasters, if they can convince us that we are complicit in our world’s destruction, and they are merely trying to provide us with what we think we want or need, then the heat is off them. Maybe he’s right.

Following is an article I wrote as an introduction to the chapter on The Tools of Disconnection in Keith’s upcoming book Underminers, that explores this in more detail.] 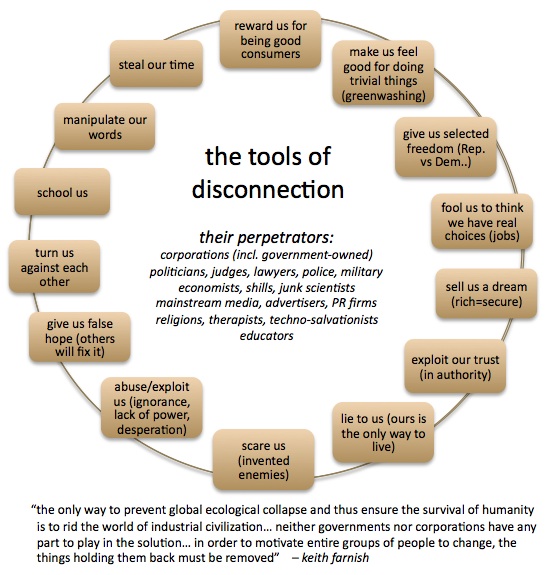 Keith Farnish tells us we need to get angry before we will be moved to act to undermine the industrial civilization that is killing our planet. Then, he says, we need to focus our attention on the “tools of disconnection” — the means by which the perpetrators of our disconnection from our intuition, our positive emotions, our senses, each other, and all-life-on-Earth keep us disorganized, confused, fearful and dependent. Our undermining actions, he asserts, should be aimed at accelerating the inevitable demise of industrial civilization with minimal suffering, balancing the risks to ensure we don’t get caught, and acting strategically to get maximum impact from our actions. The sooner we precipitate civilization’s fall, Keith says, the sooner its damage can be minimized, the sooner nature can begin to restore balance to our world, and the sooner the survivors of collapse can begin creating a better, sustainable way to live.

So who are these “perpetrators” Keith speaks of? They are the private and public corporations that depend on endless accelerating use of resources, production, consumption and waste, and which, as the book The Corporation explains, they pursue with pathological and amoral single-mindedness.

They are the politicians, judges, lawyers, police and military forces that, working hand-in-hand with these wealthy corporations, create and enforce laws and wage wars in their own self-interest, not ours. They are the media, the shills, the advertisers and PR firms, the education system and the bought economists and junk scientists who perpetrate the propaganda that everything is fine and there is no other, better way to live than industrial civilization.

And they are the religions, the therapists, and the techno-salvationists (“human ingenuity and invention will solve all our problems”) who are complicit in reinforcing the propaganda by telling us that it is our fault as individuals when things are bad, and that with necessary struggle, industrial civilization will prevail and make things better for all of us despite our personal weaknesses and sins.

The combined economic, political, media and psychological power and hegemony of these four groups of perpetrators constitute the self-reinforcing and completely uncritical and totalitarian system that Mussolini dreamed of — it was labelled fascism but he called it corporatism. Its task is to completely subjugate and control the populace, to brainwash them so completely that there is no opposition, no dissent, just a perpetual machine of unthinking monolithic human production and consumption.

Through its political messages, its advertising, its scare tactics, its lies, its withholding of information, its theft and violence, its indoctrination, its creation of false choices and false rewards, it keeps us in its thrall, disconnected. Each of us an obedient part of the system.

But what is this “system”? Can it really control us that effectively in this world where often-conflicting information and ideas are ubiquitous and free? And why would so many people — not just psychopaths like Mussolini — willingly become perpetrators of such a system?

The liberal/progressive worldview holds that we are all, at heart, innocent and good. Surely, then, the perpetrators of this terrible, unsustainable, teetering system had the best of intentions? They must have meant well, didn’t they?

This worldview also holds that getting angry isn’t the answer, that we need to appeal to people rationally, with the facts. The truth, we believe, cannot long be suppressed, and when people learn it, they will, if this system is so bad and brutal, instinctively work to dismantle it and replace it with one in the common good, a truly democratic system.

Harvard psychologist Daniel Gilbert, author of the book Stumbling on Happiness, provides some clues on why this doesn’t happen. Our large brains, he argues, have made us too smart for our own good. Our brains can now construct their own reality, completely disconnected from ‘real’ reality, and live happily in that illusory place, in effect mistaking it for ‘real’ reality. And, as Eckhart Tolle has explained, an unintended consequence of the evolution of our complex brains is that we now have an ego, capable of inventing and believing stories that provoke negative emotional responses which in turn produce in our heads other stories. This vicious cycle of negative intellectual and emotional activity in our brains, disconnected from what is really happening here, now, has made us all mentally ill.

So two paradoxical consequences of our large brains are that (i) we can be fooled and emotionally manipulated by misinformation in a way no other creature can, and (ii) even if we are one of the perpetrators of this misinformation, we can fool ourselves into believing it, especially if that belief is reinforced by others who credulously accept the same beliefs.

Despite all of this, despite the fact that we are all in a sense perpetrators, all so disconnected and confounded by our egos and the imaginary realities our brains have invented that we don’t ‘really’ know what is real or what we are doing, Keith is correct about what must be done: We must act to dismantle industrial civilization. But how can we do that when we are so hobbled, so handicapped, so caught up in this vicious system of our own making?

Keith suggests several answers. First, we have to inform ourselves about what is really happening (by reading and studying thoroughly and by thinking critically and challenging everything) and what our ‘real’ options are (by studying history and reading both fiction and radical non-fiction). Second, we have to get angry enough at the system that is killing us all (it doesn’t much matter who the perpetrators are, or if we are ourselves perpetrators or complicit) to shake ourselves out of our passivity and unawareness and act. Third, we need to influence and educate others. Fourth, we need to become models, finding radically alternative ways to live and modelling those behaviours. And fifth, we need to reskill ourselves to facilitate both the work we must do to dismantle industrial civilization, and the capacity to live good lives during and after civilization’s collapse.

This is a tall order. The first step towards well-being is to appreciate the challenge we face, and the first step to doing that is is to understand the tools of disconnection and how they keep us cowed, and dependent.

14 Responses to Does It Matter Who Is Perpetrating the Destruction of Our World, or Why?