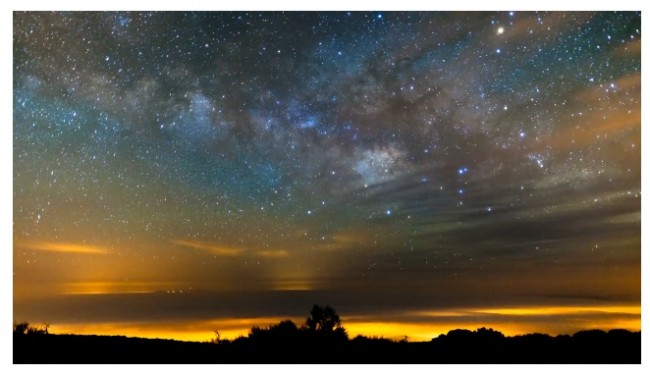 Still from the astonishing videos of Terje Sorgjerd. Watch them all! Thanks to Fergus McLean and Tree for the link.

Learning About Transition, Online: A great archive of online webinars on transition. Thanks to Paul Heft for the link.

The Elements of Collapse Video Collection: Videos about all aspects of energy, ecological and economic collapse, from the Nation. Thanks to the 3Es Newsletter for the link.

The Challenge of Collective, Collaborative Decision-Making: Thomas Homer-Dixon, Elisabet Sahtouris and others talk about one of the greatest challenges of civilization’s collapse: How we will make critical decisions about matters of public interest when governments (and corporations) crumble and fail. Thanks to Tree for the link.

The Impossible Road to 350 ppm: Joe Romm explains the 12 things we need to do now to achieve 350-450 ppm atmospheric carbon level stabilization. When you read them, you can probably appreciate why I’m so pessimistic. They would require a collective political will and action agenda unprecedented in history. Thanks to the 3Es Newsletter for the link.

Five Ways to Help Your Community Go Local: As a citizen, consumer, member, here’s what you can do.

How to Invest Your Money, Now: Dimitri Orlov says: Nohow; no forms of money will survive collapse.

The End of Ownership: Re-thinking the “ownership” society and finding a new relationship with “stuff”. Read all three parts. Thanks to Natalie Shell for the link.

The 10 Most Nutritious Vegetables: How to grow them in your garden.

Richard Heinberg on Peak Water: An excerpt from his latest book explains how water shortages will soon exacerbate oil shortages. Also, Heinberg speaks to Transition Town Totnes about The End of Growth. Thanks to 3Es Newsletter for the link.

The Coming War Between Generations?: Are the Middle East political uprisings the start of a global war against boomer gerontocracy? In the US, young Americans want the Obama they voted for to show up. But he’s just not into us.

The Saudis Admit They’re Running Out of Oil: Wikileaks reveals what the Saudis don’t want the public to know.

Films for Action: A new website has a ton of free viewable and online-orderable documentaries on energy, ecological and economic issues. A great one to start with is Gasland, last year’s investigative film on gas fracking. Thanks to 3Es Newsletter for the link.

Child-Led Learning: A resource guide to unschooling. Thanks to reader Lauren Jackson for the link. And on the same theme, why not let kids rule the school?

Fate of the World: An environmental video game, where players fight collapse and overpopulation 2020-2200. Anyone tried it?

Could an Enforced Precautionary Principle System Work?: Improbably, Derrick Jensen suggests that instead of acting as thugs and perps for corporatist criminals, with the right laws and enforcement lawyers could actually make the system work better. Dream on, Derrick.

Monsanto Sued by Organic Farmers: A consortium of US organic farmers has sued Monsanto for its GMO seeds’ “trespass” on their lands. I wish them luck. 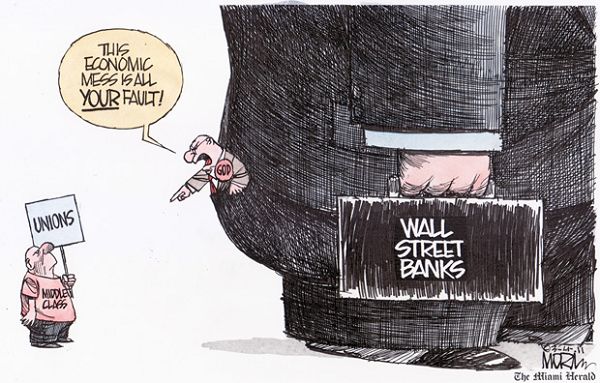 Cartoon by Jim Morin in the Miami Herald

Obama Believes We Can “Grow” Our Way Out of Trouble: Robert Reich: Stop Kidding Yourself, Mr. President.

Mexico Discards Its Farmers: But they’re fighting back.

US Military Uses Psy-Ops on Visiting US Senators: And this is surprising? Thanks to Raffi Aftandelian for the link.

The Broken Money System: A Canadian cartoon strip explains how Friedman’s economic theories caused the current financial crisis, and how we might fix the system now.

Dirty Alberta Tar Sands Oil Starts Flowing to US: Just wait until it’s the main source of US oil, and it starts spilling.

Corporatists Bully States to Make Investigative Journalism Illegal: Big Agribusiness has now succeeded in getting laws enacted in several US states making investigative journalism about factory farming cruelty a felony. Mark Bittman, long-time NYT food writer, has recently taken up animal cruelty as a cause, as the situation worsens. 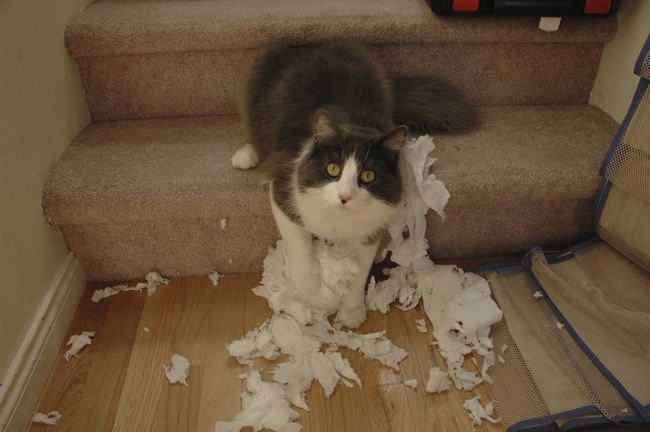 Who me? It was like this when I got here! Photo by Justin Baeder.

Thought of You: A short, delightful animation by Ryan Woodward. And how it was made.

DIY Gladwell: Make Your Own Malcolm Gladwell Book with One Click

Growing Up: This is Why I’ll Never Be an Adult. (Thanks to Tree for the link.)

Dave Gets Profiled: on Bowen in Transition in the Bowen Island Undercurrent

Not every human society has gone down this road, but we live in a world dominated by those who not only exhibit that arrogance but embrace it, refusing to accept the reality of decline. That means our individual awakenings may be taking place within a much larger dying. To face that is to live in a profound state of grief. To stay true to a radical political consciousness is to face that grief.

From Khalil Gibran: “But let there be spaces in your togetherness and let the winds of the heavens dance between you. Love one another but make not a bond of love: let it rather be a moving sea between the shores of your souls.”

From David Hazen: Victim, Rebel or Co-Creator? (Thanks to Fergus McLean for the link.)

Every year, new words are added to the language — too many, if you ask me. Nouns are dragged into alleys, beaten into submission, then sent back into the world dressed as verbs like “transitioning” or “gifting” or, if you pardon my English, “languaging.” Marketers invent new words to move more inventory. Specialists invent new words to keep feeling special. My spiritually sensitive friends invent new words to show how spiritually sensitive they are. Such people are likely to be surprised that Ernest Hemingway rewrote the last page of A Farewell to Arms thirty-eight times. When asked what the problem was, Hemingway replied, “Getting the words right.” He didn’t need new words to describe such fundamental experiences as love and death and loss and joy, just as an accomplished pianist doesn’t need 96 keys or 110 keys; 88 will do just fine.

From Peter Bolland: Meaningful Work (thanks to Raffi Aftandelian for the link)

From Brian Doyle: The Greatest Nature Essay Ever Written and Football Hero’s Homeless Grace. And also from Brian Doyle (thanks Tom Atlee for the link), Irreconcilable Dissonance.

And yet more from Brian Doyle, in the Kenyon Review:

Sometimes I daydream of having rejection slips made up for all sorts of things in life, like for moments when I sense a silly argument brewing with my lovely and mysterious spouse, and instead of foolishly trying to lay out my sensible points which have been skewed or miscommunicated, I simply hold up a card (BRIAN DOYLE REGRETS THAT HE IS UNABLE TO PURSUE THIS MATTER), or for when my children ask me to drive them half a block to the park (GET A GRIP), or when I am invited to a meeting at work I know will drone and moan for hours (I WOULD PREFER TO HAVE MY SPLEEN REMOVED WITH A BUTTER KNIFE), or for overpious sermons (GET A GRIP!), for oleaginous politicians and other mountebanks (IF YOU TELL ONE MORE LIE I WILL COME UP THERE AND PUMMEL YOU WITH A MAMMAL), etc.

On the other hand, what if my lovely and mysterious spouse issued me a rejection slip on the wind-whipped afternoon when I knelt, creaky even then, on a high hill over the wine-dark sea, and stammered would would would will will will you you marry me? What if she had leaned down (well, not quite leaned down, she’s the size of a heron) and handed me a lovely engraved card that said WE REGRET TO INFORM YOU THAT WE CANNOT ACCEPT YOUR PROPOSAL, DESPITE ITS OBVIOUS MERITS? But she didn’t. She did say yeah, or I thought she said yeah, the wind was really blowing, and then she slapped her forehead and went off on a long monologue about how she couldn’t believe she said yeah when she wanted to say yes, her mom had always warned her that if she kept saying yeah instead of yes there would come a day when she would say yeah instead of yes and really regret it, and indeed this very day had come to pass, one of those rare moments when your mom was exactly right and prescient, which I often think my mom was when she said to me darkly many years ago I hope you have kids exactly like you, the ancient Irish curse. Anyway, there I was on my knees for a while, wondering if my lovely and mysterious paramour had actually said yes, while she railed and wailed into the wind, and finally I said, um, is that an affirmative? because my knees are killing me here, and she said, clearly, yes.