A lot of reading, this month, and not a lot to show for it. I get some comfort from the belief that more people are talking seriously about the probability of civilization’s collapse, and doing some serious catching up. There seems to be a growing realization that our civilization culture cannot be saved, that the sixth great extinction has such momentum that no amount of technical wizardry or magical thinking can prevent it, that there is no elite currently conspiring to destroy the world that will suddenly realize their error and pull together to reverse course, that no one is doing this to us, that no one is in control, that despite the great hardships ahead life is still astonishing and beautiful, and that the seven steps* I am now taking, after a decade of study of how the world really works and what is possible, are the best, and the least, we can do. 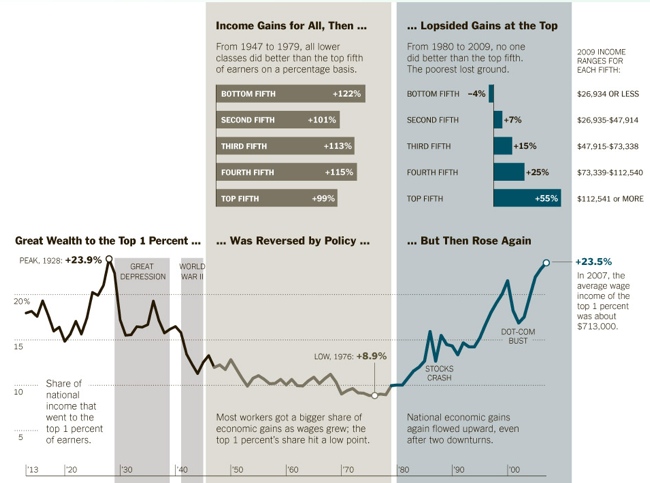 The Great Regression and the Return of the Robber Barons: great infographic from the NYT; click here to see the whole thing (thanks to Bill Tozier for the link)

This is All We Can Do Now: Some astonishing writing by Canadian novelist Jeff Wells explains how our society has begun to desensitize us to prepare for the passive, obedient, unaware reptilian existence that mindless consumerism in an age of collapse requires. As full human beings, he argues, we’re just not needed anymore. Thanks to Michael Wiik for the link. Two citations in this epic-length essay just to whet your appetite:

“Our civilized world is nothing but a great masquerade. You encounter knights, parsons, soldiers, doctors, lawyers, priests, philosophers and a thousand more: but they are not what they appear – they are merely masks…. Usually, as I say, there is nothing but industrialists, businessmen and speculators concealed behind all these masks.” — Schopenhauer

“I don’t want to be overly dramatic about it, but I think people more and more wonder, is this living, or are we just going through the motions? What’s happening? Is everything being leached out of life? Is the whole texture and values and everything kind of draining away?” — John Zerzan, Running on Emptiness: The Pathology of Civilization

Dmitry Orlov Deconstructs the US Economy and the Transition Movement: Unlike the Soviet Union before its collapse, he says, Americans are still in delusion and total denial that their economy is unsustainable and teetering, and they are dependent on the system’s continuation and therefore in no position to revolt. Meanwhile, Transition is a great idea in principle, he says, but… Thanks to Tree for the link. Excerpts:

Interviewer: Anyway, so what do you think of the Transition movement as a possible solution for communities or individuals?

Orlov: Well it presupposes the idea that you can get there from here.

Is China Ready to Pull the Plug?: New research suggests that China has freed itself from dependence on exports to the US and EU, and can now afford to sell off its massive US financial assets as expeditiously as possible, potentially letting the hugely overpriced US dollar collapse. Thanks to Melinda Fleming for the link.

Taking Direct Action: The documentary on the Earth Liberation Front “If a Tree Falls” has been shown on PBS and is now available for free online viewing until October 13. The film explains the rationale for ELF’s organizational structure and tactics (arson gets extensive media attention and often dissuades risk-averse megapolluters from resuming or continuing their more egregious activities), and describes the outrageous US laws (life without parole in one of the infamous American black-hole CMU prisons with no judicial discretion to reduce the term) for any destructive action against property carried out as an environmental protest. Scary stuff from the nation that brought you “Communist” witch-hunts, extraordinary rendering, and Guantanamo.

Co-op on Tap: The Black Star Co-op Pub and Brewery is an interesting experiment in self-management, essentially a multi-stakeholder co-operative enterprise where the workers, suppliers, customers and investors are indistinguishable. Thanks to Dale Asberry for the link.

A Currency Measured in Hours: A time bank in NYC allows people with no money access to essential services by contributing their time doing something they are good at in return. 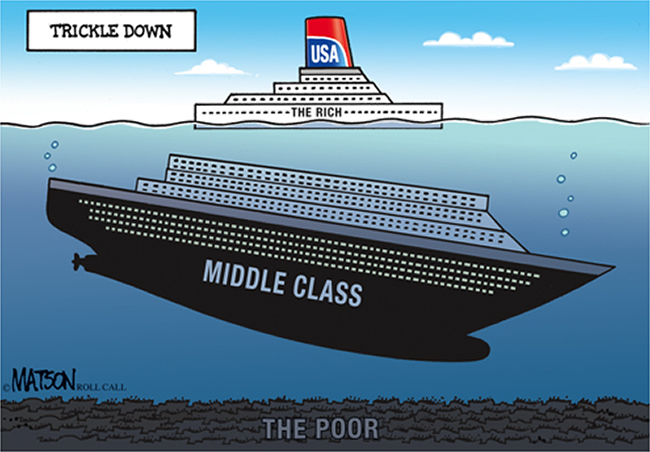 (A lot of people send me links to articles showing the corruption and incompetence of governments (notably the US government), regulators, and military and security agencies. The feeds I read regularly are likewise full of such reports. I appreciate receiving these articles, but after a while I start to get numb to them. So I will acknowledge that more-or-less the entire global corpocracy is rotten, bloated, and dysfunctional, and leave it at that. It is quickly falling apart, and running out of sources of money, so it won’t be able to do its terrible damage too much longer.)

The Boycott List: Responsible Shopper still publishes its social and ecological ratings of large business-to-consumer corporations, and its Green Pages of responsible (mostly local and small) businesses. Looking at the comparatives of large companies is discouraging — they are almost uniformly bad, irresponsible, destructive, unresponsive megaliths. Better to buy local, organic, and/or fair trade from small companies you know behave responsibly, and just boycott all the big companies, and the retailers, banks, lawyers and other parasites and media organizations that support them.

Stop the Tar Sands: The Dominion calls for direct action to stop the abominable Alberta Tar Sands and confront the right-wing federal and provincial governments that serve only as shills for Big Oil. As I predicted, the Washington DC demonstrations against the latest Tar Sands pipeline were a useless distraction and time-waste, a spectacle where has-been actors rehearsed and acted out getting arrested in front of the cameras, over-exposed ‘environmentalists’ plugged their latest books, and, behind the scenes, lobbyists got reassurances from Obama and his regulatory authorities that the pipeline and other Tar Sands support would be smoothly fast-tracked ahead, that the pipeline could be used for bulk water removal from Canada when the oil ran out, and that they could ignore the poseurs on the White House lawn. Meanwhile, Michael Cote reports that there are already 500,000 miles of pipelines in North America, most of them decrepit and overdue for tests and upgrades, just waiting to leak, burst etc.

Homeland Security: The Decade’s Biggest Scam: Glenn Greenwald reports that after spending billions, the US is much less safe than it was a decade ago, and is now saddled with a crushing and unaccountable run-amok domestic “security” bureaucracy that might be the final straw in bankrupting the country.

Seriously Damaged Rich People: I’m a believer that most people really do want the best for the world. It’s only the psychopaths, people seriously damaged some time in their past to the point that they lack all empathy and conscience and are utterly ruthless in their ideologically-driven activities, that we need to watch out for. The Cheney-Bush gang are the most notable examples, but on the corporate side the Koch brothers and this motley crew of wacko supporters are the standard-bearers.

Red Ink: How the US got $14T in debt (mostly the Bushes), and who it’s owed to; another great infographic from the NYT. Thanks to Seb Paquet for the link.

Garbage Art: Waste Land, a new and inspiring film pays homage to those who live by picking garbage and shows that great art can be made from anything. Thanks to Nancy White for the link.

Underground Missile Bases for Sale: Slightly used massive underground bunkers, some with airstrips and indoor pools. Suitable for theme parks, private security and income purposes. And great neighbours! Thanks to Morva Bowman for the link.

Writers Who Don’t Read: More and more young writers are choosing not to read, possibly because of the modern stigma, in this age of social networking, of spending lengthy periods of time alone. This seems to me a lot like being a chef who chooses never to eat prepared food.

The most important advice ever written for poets, from TS Eliot (cited in this week’s New Yorker, not online, in a review by Louis Menand of his newly-published letters):

The only way of expressing emotion in the form of art is by finding an “objective correlative”; in other words, a set of objects, a situation, a chain of events, such that when the external facts, which must terminate in sensory experience, are given, the emotion is immediately evoked. [Menand goes on, explaining how Eliot’s small body of works utterly changed the writing of English language poetry: “I know that what I am looking at is a house because I am already familiar with things that look more or less like it and are houses. This is what enables me to say that the particular house I am looking at is a big house, an ugly house, a modern house, and so on. The same thing happens when I read a poem; I relate it to all the other poems I have read — in the head of an ideal reader, to all the poems that have ever been written. Past poems condition my response to any new poem. And the really new poem conditions my response to all the poems that preceded it. After “Prufrock”, the Inferno is, ever so slightly, a different poem. After I see a house by Marcel Breuer, my own house looks, ever so slightly, different.”]

From Raphael Enthoven in the NYT, “On Reverie”:

It’s a sweet drug that plays with fire. A wasteland — forest of ruins or paved-over jungle depending on whether wakefulness or sleep tips the scales. An old city where the shadows still hold a trace of vanished occupants, where detailed buildings, patiently reconquered  by nature, suddenly still are there, sand castles. Through the dreamer’s kaleidoscope where the absence of desire is taken as reality, birds slash through the twilight, cypress trees dive into the pool, stars sparkle in the sea, clouds take on shapes, water lilies bloom in the sky, plans become flexible, the limit to how far things can go relaxes, thought dances, light is lit by shade, opposites are juxtaposed, merge and become linked in a prelude to beauty: reverie is contemplation’s prehistory, the education of the gaze by the eyes of the soul. The world before concepts.

From JC Miller on conformity (in a letter to the editors of Salon):

American “adults” desperately and anxiously seeking approval and sense of worth – from Mommy and Daddy, peers, the norms transmitted over their TVs, their economic masters, their congregations – are terrified of deviance, of difference, despite their healthy aversion and abhorrence of the infliction of pain and death on other living things. That is what they have butchers and soldiers for, and that is why they eat meat.

* (1) understanding what is really going on, (2) acquiring essential knowledge and abilities, (3) reconnecting with the Earth, (4) living responsibly, (5) showing and telling others why and how to prepare for collapse, (6) fighting back against the destruction, and (7) living joyfully