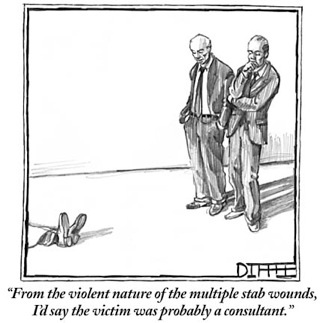 Cartoon by Matthew Diffee in The New Yorker

I‘m back home after 10 days in the US. The delays and challenges of crossing the border get worse every trip, and I am filled with unease every moment I’m in the Paranoid States of America. I know that I might be interrogated, imprisoned indefinitely without cause or charge or access to legal counsel, and secretly deported, possibly to a country that treats prisoners even more brutally than the US, without anyone being told what had happened to me. This treatment would have nothing to do with the law or violation of it or due process, but would be on the whim of any employee of the massive run-amok unaccountable security apparatus that now dominates “law enforcement” in the US. And it happens every day. And it’s likely to get worse: The US administration is considering border fencing and large-scale regular drone flights along the border.

Meanwhile, the euphoria of the Metamovement / Occupy movement is surfacing many suggestions and ideas for a better economy, ways of reinventing the economic system to operate for the benefit of all. What all these proposals seem to have in common is that they offer no credible path to get there from here. An idea that cannot be implemented without an unprecedented global massive change in our thinking is just an idealistic dream, and today, we need something more than dreams. It will be left up to the realistic few, those who have moved past the second denial, to act. It remains to be seen what those actions will be, and what they will accomplish.

“La La La La I Can’t Heeeeear you!”: Why your brain won’t allow you to believe that civilization is inevitably crashing. Thanks to Todd Suomela for the link.

The Depression: If Only Things Now Were That Good: David Leonhardt in the NYT explains why the economic outlook today is much worse than it was just prior to the Great Depression. And Sharon Astyk notes that his pessimistic review omits the fact that we no longer have cheap oil to power our way out of it. And this post from Business Insider has a substantial and astonishing set of charts on wealth inequality, the plight of the 99%, and financial sector profits.

Alan Grayson Steals the Show on Bill Maher: In just 90 seconds (starting at 1:45 mark of this video) Grayson explains the outrage of the 99% against Wall Street and their fury against governments that don’t do their job. This guy should be president.

“I Never Realized How Dull a Classroom Could Be”: Kate Fridkis talks about going to university after a life of unschooling.

Feminism and the Metamovement: Twisty at I Blame the Patriarchy provides some backstory for her always well-reasoned radical feminist viewpoint. She helps us remember that patriarchy and misogyny are integral drivers of the industrial growth economy, and of the tools of disconnection that have allowed the 1% to steal the resources of the other 99%, and which have created a civilization that is unsustainable and ruinous. A core part of the Metamovement “wake up” call for all of us. 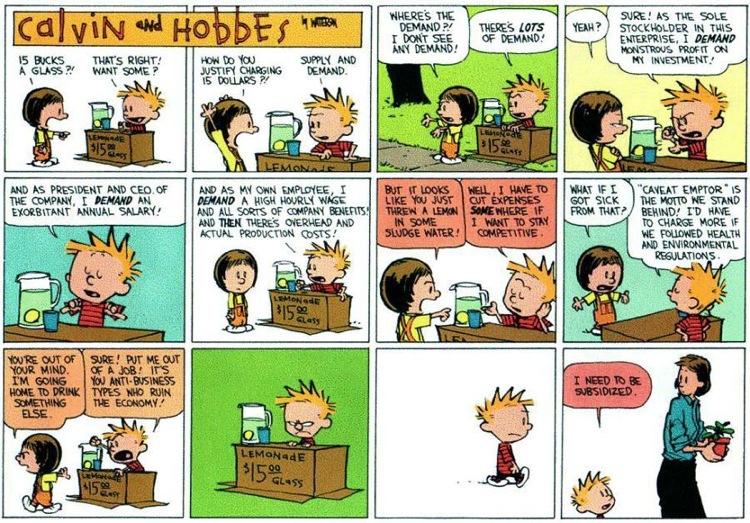 Calvin and Hobbes explain the financial crisis. Thanks to Sharon Goldberg for the link.

“Voting is Worthless”: The NYT summarizes what’s happening in the Metamovement in Europe and Asia, where participation in anti-corporatist and anti-corruption demonstrations regularly dwarf what North American protests draw.

The Creative Class is a Lie: Salon’s Scott Timberg launches a series of articles explaining the nonsense of corporations embracing “creatives”, and other magical thinking about the ability of our dysfunctional economic system to reform itself.

Scientists Dispute FBI Conclusions on Anthrax Mailings: The FBI ruined one man’s reputation with false accusations, and then drove a second to “suicide”, in a staggeringly botched (or deliberately falsified) investigation into the mailing of anthrax-laced letters to left-of-centre politicians shortly after 9/11. Now, scientists say that the guy who allegedly committed suicide (conveniently before trial), Bruce Ivins, the champion of using US military personnel as guinea pigs for his dangerous “squalene” process of injecting oil into patients’ blood streams to shock the system into reacting more strongly to small amounts of anthrax vaccine (hence making the vaccine much cheaper), either was not the perpetrator of the anthrax mailings at all, or else had top-level sophisticated help. The entire investigation is fatally tainted, and the rush of the US administration to close the case has a very bad smell.

“You Hypocritical Americans Think Others Should Abide By Laws That You Ignore”: In its continuing distortion of the news to US audiences, the American corporatist mainstream media covering the release of the US hikers kidnapped in Iran conveniently omitted references to the fact that the hikers blamed much of their ill treatment on the US government’s policies of warrantless arrests, torture prisons, refusal to sign international rights accords, contraventions of the Geneva Convention, and extraordinary rendition. Their captors told them repeatedly, and correctly, that if they had been foreigners captured in the US, their treatment would have been much worse. Just ask Maher Arar.

The Second Keystone Pipeline: Just on the off-chance the US government can’t be wined and dined and lied to by Big Oil sufficiently to approve the Tar Sands pipeline to Louisiana refineries, there’s an alternative, even more environmentally destructive Plan B pipeline that would take the Tar Sands sludge through the Rockies and hence on to China for refining and use there. Big Oil doesn’t care. The extreme right-wing Canadian federal and Alberta governments don’t care. They’re content to let lobbyists and environmentalists fight it out to determine who will get the sludge, mined in the most environmentally destructive project in human history and one of the world’s sources of global warming — the US or China. Whoever wins, everybody loses.

Warning from Harper to Environmentalists: Canada’s loonie government has issued a quiz for its anti-money-laundering regulators that labels organizations like PETA, IFAW and Greenpeace as “eco-terrorist” organizations. Guess we know what to expect if we try to block the Tar Sands now. 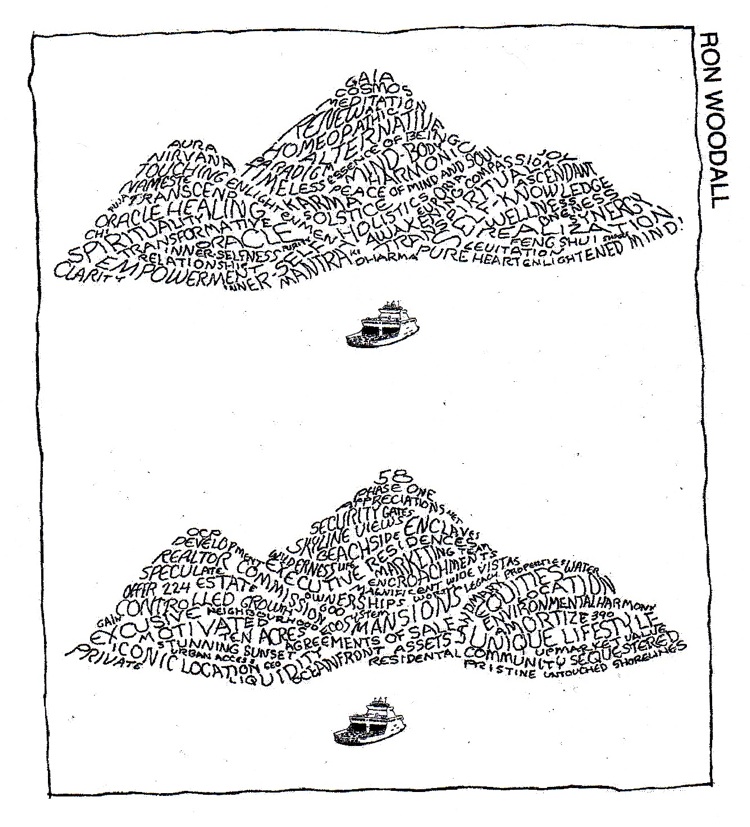 This amazing drawing by Bowen Island cartoonist Ron Woodall shows how my idyllic home is perceived both by those of us who see it as sanctuary (top) and those who see it is development opportunity (bottom). The image is the three iconic mountains of Bowen Island (Apodaca, Gardner and Collins) as viewed from the hourly ferry that connects us to the ‘continent’.

“They Believe in Social Darwinism But Not in Darwin”: Yoram Bauman’s brilliant stand-up routine sends up the full spectrum of American politics.

“From Blackout, to Circus”: Jon Stewart explains the media coverage of the Occupy movement. Thanks to Tree for the link and the one that follows.

Letter from Goldman Sachs: Andy Borowitz sends up Goldman Sachs with a letter telling the bank’s clients how to profit from the Occupy movement.

This is Where I Live: A video of a helicopter flight around Bowen Island, my home, showing the 40% of the island being considered for a National Park. I think that is my house at 6:29 at the right edge of the screen halfway up.Thanks to Chris Corrigan for the link.

Via Richard Heinberg (thanks to Paul Heft for the link):

But our society as a whole is not inclined to do what is required to solve them, even if the consequences of failing to do so are utterly apocalyptic. This statement seems bizarre on its face. Who would prefer to see economic collapse, the exhaustion of precious natural resources, the disappearance of millions of species, the failure of food systems—and resulting misery and death for millions upon millions of humans? Well, no one, if we put it that way. Yet the choices are not always so clear-cut, and we humans are hard- and soft-wired with genetic and psychological programming that can make it very difficult for us to undertake costly short-term behavioral change in order to avert future catastrophe. Policy makers will do the right thing only after all other alternatives have been exhausted.But for the solutions we [need now], this does seem to be more or less the case. And this is true not just of policy makers, but the majority of us worker bees as well.

[There is a fundamental] mismatch between the human nervous system and the complexities of our modern world. While early hunter-gatherers evolved quick reflexes to cope with immediate threats in a limited environment, people in modern industrial societies face long-range problems not readily apparent to the five senses — growing population, climate change, resource depletion, and proliferation of debt. At their cores, our fight-or-flight brains just aren’t up to dealing with these kinds of slowly developing dilemmas, even though our more advanced cerebral faculties enable us to define both challenge and potential solutions…

All of the solutions to our growth-based problems involve some form of self-restraint. That’s why most of those solutions remain just good ideas. That’s also why we will probably hit the wall, and why [catastrophic] outcomes are likely. The sustainability revolution will occur. The depletion of nonrenewable resources ensures that humankind will eventually base its economy on renewable resources harvested at rates of natural replenishment. But that revolution will be driven by crisis… [So, ] how should we be preparing?

From Bucky Fuller (thanks to Flemming Funch for the link):

The things to do are: the things that need doing: that you see need to be done, and that no one else seems to see need to be done. Then you will conceive your own way of doing that which needs to be done — that no one else has told you to do or how to do it. This will bring out the real you that often gets buried inside a character that has acquired a superficial array of behaviors induced or imposed by others on the individual.