Every Picture Sells a Story

(And now for something completely different. This article is a bit of a flight of fancy, since looking at photos can encourage such strange imaginings. It may come across as pat or angry but it’s not intended that way — it’s meant to be provocative, to get me (and you, if you’re so inclined) thinking in a different way about what we see, and what it means. Please don’t take my meanderings below too seriously — I’m just trying out some new ideas out loud. — Dave)

Take a look at these early colour photos, taken in the US between 1939-43: 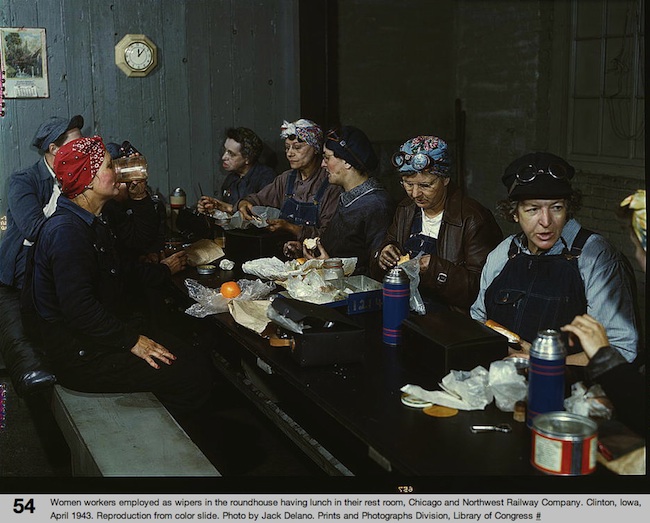 Take a look at the whole series, not just the one I’ve sampled above. Take your time. Look at each photo. What is it telling you? 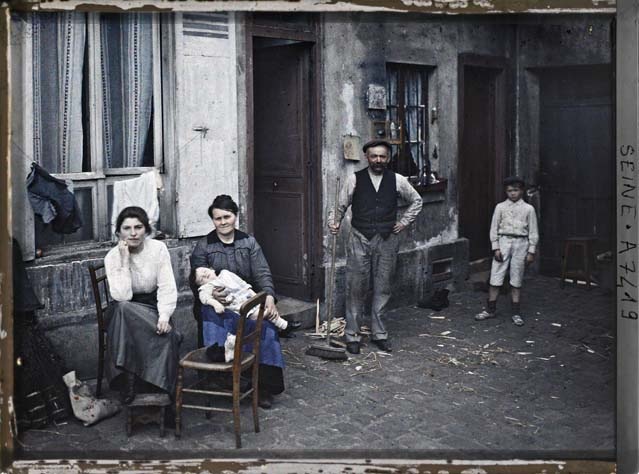 And at these early colour photos, taken in Russia between 1909-12. Hard to believe they were all taken in the same country (then the Russian Empire), isn’t it? 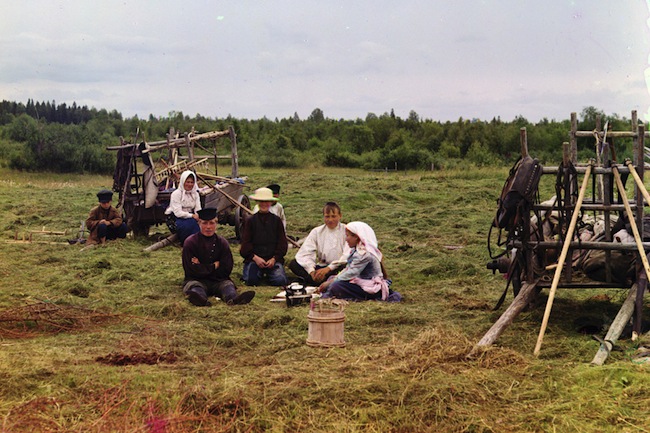 Although the following photos have been colorized from high-quality black and white shots, they’re also worth a look. Here’s a photo of the Bowery in New York in 1905, by colorist Scott R at Shorpy’s vintage photo site; see the full-size version here if you want to look at the facial expressions: 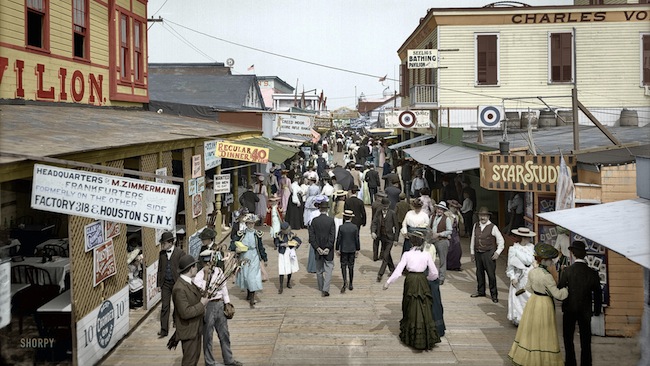 Here’s a version of a photo of flood victims lined up for assistance in 1937 in front of an ironic billboard, by the amazing Swedish colorist Sanna Dullaway for Time magazine from this collection: 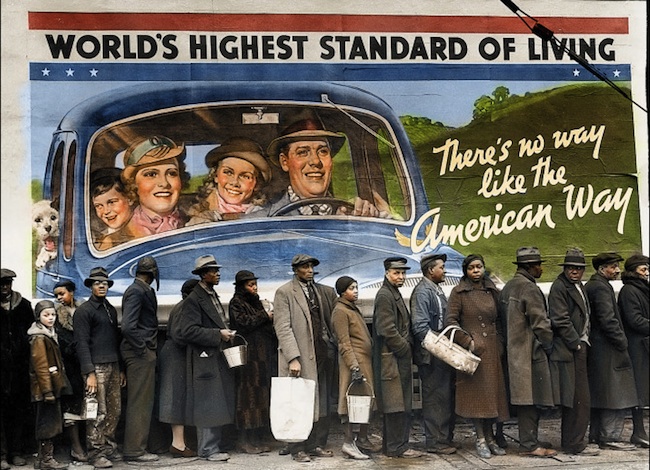 The reaction of a lot of people looking at these photos (based on the comments on several of these photosets’ websites) is: (1) life was much harder back then; things are much better now; and (2) people sure have changed since those days (for better or worse, depending on the commenter).

The women working for the defense industry in the first set of photos above (just about the only industry there was in war-time, end-of-depression-era years) are there because their husbands and fathers are fighting overseas; they will be immediately laid off as soon as the war is over.

So why do they look so poor? One reason: the banks had not yet decided to ratchet up the consumer economy by making credit available to everyone, and, working with the corporate sector and media, propagandizing the population to believe that having two or five times the assets, along with two or five times the debts, somehow represented an “improvement” in their lives, and that if they didn’t acquire all the assets their credit limit would allow, they would be considered economic “failures” by their superficially-“richer” neighbours and peers.

Where has this superficial “wealth” come from? From using cheap energy and cheap foreign (and domestic, non-unionized, minimum-wage-or-less) labour to exhaust the planet’s resources to make billions of shoddy, throw-away products (keep ’em buying more). From indebting workers their whole lives so they will stay in thrall to the corporatist employers that exploit them, and then passing those debts on to their survivors. From using up, in a couple of generations, cheap (when costs are externalized) natural assets the planet took hundreds of millennia to produce, and hence depriving future generations of enough resources for them to live on, while saddling those future generations with mountains of garbage, toxic wastes and trillions of dollars in debts that can never be repaid without impossible, perpetual growth — debts that will come due and collapse the economy beyond recognition. From stealing land and resources from the commons, the people, for exploitation by a tiny minority of rich corporatists. From stealing the land and resources of third world nations and then saddling those nations with phoney, inflated “debts” and inflicting misery and deprivation on their people to punish them for the avarice and greed of corrupt “leaders” once sponsored and supported by the colonial corporatists in return for giving away that land and resources.

In other words, the current “wealth” is a fiction. If you were to take the photos in the sets above and photoshop them by putting obscenely expensive jewelry and clothing on all the people, replacing the cars and wagons with limousines and private airplanes, and “painting” the walls of all the buildings with marble and tapestries, you would get only a slightly exaggerated comparison with what today’s photographs, with our debt-laden buildings, vehicles and clothing, and our resource-exhausting, ecosystem-destroying and climate-destroying “wealth”, present. And for this, two people per household put in longer hours with less work “security” than past generations (some studies have suggested that for more than half of today’s “affluent nation” families, they would be bankrupt in 60 days or less if, due to some adversity, one family member suddenly lost their income).

What if we were to do the opposite, and “photoshop” today’s photographs to eliminate all the “wealth” that hasn’t been paid for and for which there is no reasonable expectation that it ever can be repaid? And to eliminate all the “wealth” that came from stealing from future generations, third-world nations and a million times our share of nature’s resources? My answer? Pretty much this: Seven billion naked, starving, clueless people scrounging through garbage and exhausted soil for clean water and their next meal. That’s the real story our modern photos tell.

So much for things being better now.

Have people really changed in the last 100 years? Some of the commenters on the sites where these photos were published write with either nostalgia (that life was simpler and people better-behaved then) or self-satisfaction (that life provides far more freedoms now).

That’s not what I see in these old photos, or the faces in them. What I see is conformity, resignation and mindless obedience to the beliefs and standards of behaviour and appearance of the day. For these people, regardless of their place (country of residence or social situation), there is just one correct way to live. The costumes are different but uniform in each picture. So is the behaviour, and, implicit in the exhibitions of patriotism, of work, of posture and action and dress, so are the beliefs. I look at these faces and recall what my parents believed, and my grandparents, and, from my research and my grandparents’ stories, what their parents and grandparents before them believed. They all believed what they were told, by their parents, by their “leaders”, by their bosses, by the politicians and media and, most of all, by their peers and friends and spouses. Their actions were in accordance with these beliefs. Non-conformity and rebellion and disobedience were tolerated in youth, in moderation, with the knowledge that the relentless and combined effect of the homogeneous culture would soon grind down such misbehaviour and recalcitrance and remake every individual into, as EE Cummings put it, “everybody else”. Not just like everybody else. Into everybody else.

But that’s changed, right? Look at today’s photos and you see a vast divergence and high tolerance for and displays of diversity of appearance, beliefs and behaviours? No?

No. Go ahead, look at the photos in your newspaper, your yearbook, Flickr, or Facebook, or the iconic photos in the magazine racks. What do you notice about these photos? They’re all the same. Just like a century ago, we’re all brainwashed, from birth, to dress, think and act like everybody else. To be everybody else.

There is one significant difference between the photos of a century ago and those of today. A century ago the homogeneity was within each culture. And there were lots of somewhat different cultures then. Today there is only one culture, and it’s global. It is eating up the remaining cultures and the last vestiges of diversity of dress, of thought, and of action, just as it’s eating up the resources of the planet, at a dizzying pace. Everyone is becoming, more and more, everybody else. It’s a corporatist’s wet dream.

Every photo is a story, and as soon as it’s taken, it’s a story of the past. It’s a fiction. It’s only a story, though it’s our story, or so we tell ourselves. It’s only sensible that we want to capture it, recall it, tell it again. How much harm can there be in that?

8 Responses to Every Picture Sells a Story