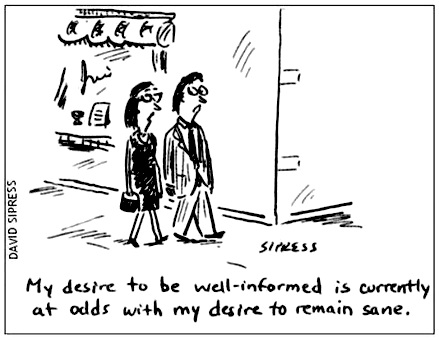 cartoon by David Sipress  from the New Yorker

I have noticed a subtle change over the last year or two in what (and how) both mainstream and alternative media are reporting (worse news, more indifferently, more dishonestly and more under-reporting). I’ve also noticed a gradual increase in the general level of non-specific anxiety, pessimism, guilt, shame, premonition and overwhelm of my friends and acquaintances (it’s even worse now, I think, than it was right after 9/11). And I’ve noticed a similar disturbing increase in the general level of malaise, meanness, insensitivity, and demonization of others in general public discourse.

I think these are all symptoms of the early stages of collapse.

Here are the shifts I am seeing more tangibly that would seem to epitomize early collapse:

While I believe most of these trends and emergences are complex collective responses to changing realities, and either well-intentioned or unconscious (i.e. without malicious intent), taken together they would seem to evince a broad, intuitive shift in our collective gestalt, our way of coping with the world. They reveal more than anything, I think, a giving up of the belief in fairness, justice, controllability, understandability and consensus as means of “making sense” or taking action reliably to achieve desired objectives in the current reality of how things work. They reveal both the incapacity of our now massively-overgrown, fragile and unwieldy systems to function sustainably or effectively, and the incapacity of ourselves and our broken communities to function effectively within their purview.

In other words, just as we became, over the last few millennia, increasingly disconnected from nature and from our integral place in the web of all-life-on-Earth, we are now quickly becoming disconnected from human-made systems that we realize, at least subconsciously, no longer function or support us — indeed they imperil our existence. This second disconnection is a healthy one, a sensible coping mechanism, a first step in preparation for the perilous and rocky shift to a possible new way of living in both a human and more-than-human society, at least for the survivors of collapse. Intuitively, it’s the only sustainable way for us to live.

This letting-go of our belief in and reliance on and support for civilization’s systems is of course frightening — we want the new connections, the new ways of living and being, to be securely in place before we give up on the old ones. We want to know the new story before we can honestly accept that the old one, the one we still cling to and believe in so utterly, so passionately, and now so desperately, has always been a lie.

12 Responses to Grimly Letting Go of the Old Story