The Power of Pattern Languages

I was recently interviewed about Pattern Languages, and specifically about Group Works, the pattern language of  collaborative, deliberative and participative processes that I was involved with (I’m a member of the coordinating team that produced the card deck based on the pattern language).

The interview has been picked up by Shareable. Here’s a teaser and a link to the whole article, titled The Power of Pattern Languages: 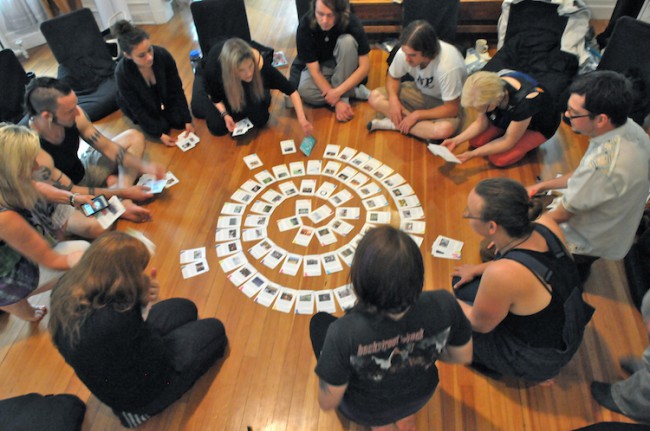 Paxus Calta: Why are most meetings, conferences and other deliberative processes so bad?

Dave Pollard: Seven years ago, a group of professional facilitators convened to answer that question and see if they could come up with a better way. They ended up producing Group Works: A Pattern Language for Bringing Life to Meetings and Other Gatherings, a 100-card deck of exemplary group practices that has since been used by thousands of people in over two dozen countries.

Dave: Organizations used to use so-called “best practices” to improve the way things are done, but their use has waned recently because leaders realized that the context in which any such practice is useful is usually pretty narrow.

A more current approach to improving processes is to collect and mine large numbers of stories about what works well in a particular discipline or area of professional practice or other activity, and then look for the patterns in those stories – things that seem to work well across a wide spectrum of different contexts and at many different scales. A cohesive set of such patterns that can be used together to improve processes is called a pattern language. The term was coined by Christopher Alexander and his colleagues who developed the first such language in the field of architecture.

To give you an idea of what a pattern is, in collaborative and deliberative work we discovered a key recurring pattern in many stories of successful meetings is Holding the Space – creating a safe space in which all participants are enabled and encouraged to offer their knowledge, ideas, perspectives and insights to the whole group. Each field has its own patterns; in activism, for example, one recurring pattern is Reframing: changing the way people talk about an issue from the way your opponents speak about it to the way your supporters speak about it.

We’ve learned that understanding and evoking patterns of exemplary process leads to better outcomes than other approaches in many disciplines, and we’ve been blown away at the diverse and powerful ways our Group Works pattern language has been used, including some ways we never imagined…

Read the whole article on Shareable

Thanks to Cat Johnson for publishing this interview