Last weekend in Montréal I piloted a new session entitled Seven Generations from Now: A Collective Improv. The invitation  for the event was as follows:

Welcome, friend! Sit with me in this circle around the campfire, in these early days of the 23rd century CE. (You are your own great-great-great-great-great grandchild.) The two-century Long Emergency has finally wound down. There are only about 150 million humans left now, they tell us, and much of our planet is too hot to be inhabitable. The weather’s still wild but at least we managed to get all the nukes decommissioned. We live a much simpler, relocalized, neo-tribal life now, with the only real technology scavenged for essential medical and shelter purposes. But life is good, here on the banks of this ancient river. So, tell me, friend, how are you doing and what brings you joy these days?

Nancy White did a wonderful job of graphic recording the event (see above; click here to see a larger version), and local artist Elissa Baltzer did tribal face painting for the participants (see her amazing work on Flemming Funch, below). 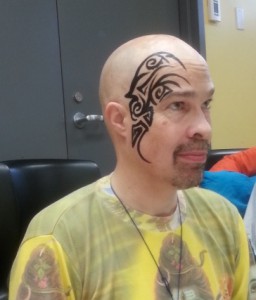 The idea of the event was to find a way to move past the dread and grief and shame of civilization’s collapse, and to imagine together how much better life might be for our descendants after civilization is gone and forgotten. Choosing seven generations (200 years) is taking a bit of poetic licence, since civilization took seventy generations to ruin our planet, and it will likely take that long to recover fully from it. And human population in two millennia is likely to be much less than 150 million, for all kinds of complex reasons. But you get the idea.

The Seven Generations meme comes from some First Nations beliefs that it is our responsibility to ensure the world we leave our descendants seven generations from now is (at least) as healthy as the one we live in ourselves. Joanna Macy does an exercise in which half of the participants speak with their descendants seven generations from now, as part of her grief and despair training for those who see civilization’s collapse as inevitable. But its principal purpose is to seek solace in forgiveness. My intent is instead to help us move past our addiction to civilization by seeing that what our descendants will inherit after its demise will be wondrous, magical, much better than the crumbling, sick, overcrowded world we’re struggling with.

Unfortunately, quite a few of the participants couldn’t get into it. Some couldn’t get past thinking about how we would get there or what collapse was like, instead of leaving it behind. Others just couldn’t, or wouldn’t, or didn’t believe that collapse would occur at all, or at least was inevitable (although there were 12 attendees at the session from the Dealing With Collapse facebook group, most of them are still making their minds up about if and/or how collapse will unfold). One of the participants, Juan Carlos Londono (who also, incidentally, has spearheaded a French language translation of Group Works), jumped into the fray in true improv fashion and brilliantly modelled what an imaginative improv collaboration looks like, making up new 23rd century words and inventing a whole social texture for the brave new culture. By then we were near the end of our time, so while it was a wonderful practice and learning experience for me, it was likely less than satisfactory for the struggling participants. I thank them for their bravery and patience!

I still think the idea has merit, and I intend to keep trying it. I am confident that, had I tried this out on my Dark Mountain colleagues in Totnes last year, it would have been quite amazing (they tend to be full-blown collapsniks, and as artists have the improv gene in them as well).

Here’s what I will do differently next time:

I think we need this. We need to think about the future with joy and not just dread. We need to imagine a life better than is even possible today, for our own good and for our descendants. This might be a start.

7 Responses to Seven Generations From Now