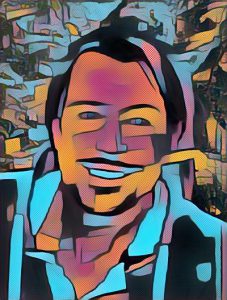 I‘ve been hosting my two wonderful friends from Peak Moment TV, Janaia and Robin, for the past few days, and mentioned to them the strange paradox of becoming increasingly ‘self’-aware, but only until/unless my ‘self’ falls away and this is no longer useful. And the equally strange paradox of realizing that the precondition for glimpses of ‘self’-liberation seems to be the limerence of the earliest stages of new love, but that in that limerence nothing else (including my ‘self’) matters — In love, I am simply not my ‘self’. Who or what, then, am I?

In her comment to my last post, Kari mentioned that she has found that in moments of exceptional creativity the self seems, likewise, to be largely absent (though when it returns and edits the creative work that somehow emerged without the self’s presence, that editing makes the ‘self-less’ work even better). Similarly, it has seemed to both of us that what one could call ‘intuition’ might be something that comes from outside the self, and hence might be the ‘whispering’ of ‘all-there-is’ in ‘our’ ears, giving us knowledge that the self cannot consciously countenance.

The essence of duality is that there is a ‘self’ separate from all-there-is. But in these four types of seemingly time-less moments (moments when the self falls away and all-there-is is ‘glimpsed’; moments of falling in love; moments of exceptional creativity; and moments of deep intuition) it is almost as if the impossibility of the self realizing that it is an illusion, is somehow breached. These are moments beyond thought, moments of what I used to call ‘presence’ before appreciating that that word is deceptive (because it suggests that it is a ‘conscious state’ that can somehow be worked towards or achieved).

It is tempting in these moments (and in the moments afterwards when the self tries to figure out what just happened) to invent a third person, an ‘observer’ or ‘witness’ (or even what some ‘spiritual teachers’, disturbingly, call the ‘real you’) that is separate both from the self and from all-there-is. It is as if the self realizes its ‘self’ for the illusion that it is, but only when it is seemingly outside itself. If the self is a recursive, or reflexive, imagined entity, perhaps it makes sense that it can only perceive itself non-reflexively, as a third person, an ‘other’.

With the understanding that I cannot control if, or when, my self falls away, I have found it interesting in the meantime to think about (a) how the self arose evolutionarily (possibly as an unfortunate and devastating consequence of the emergence of large brains), (b) what motivates it, and, (c) most recently this week, what ‘we’ are ‘apart’ from or ‘without’ it.

In the absence of a self, it would appear that behaviour of humans doesn’t noticeably change much, other than perhaps the gradual end of neuroses (chronic anxieties etc) and an end to such self-preoccupation. Without a self, humans (apparently) continue to do each moment the only thing they can do given the immediate and specific circumstances they face. They fall in love, or they don’t. They create, or they don’t. They have (and act on) intuitions, or they don’t. There is no longer a self presuming to be in control of, presuming to have some choice in, and presuming to be responsible for, these behaviours. Since that self and its control, choice and responsibility were illusory anyway, nothing appears to change. All-there-is continues to play the game of being, apparently, everything.

There is no self left who is relieved to no longer suffer under these illusions, so there is no ‘feeling better’ about the world or ‘oneself’, even though there is one fewer suffering self. The entire convoluted process of the particular self and all that ‘it’ is trying to do — trying to become more self-aware, trying to understand what motivates the self, or what falling in love or intuition or remarkable creativity imply about the self — just ends. Or more accurately (and even more paradoxically) it is seen (but not by any ‘one’) that the process never was, just as the self never was. All-that-happens keeps happening, including apparent actions involving an apparent human that other illusory selves keep calling by a particular name, but this is all an appearance. There is no person, there are no individual humans or selves. All-there-is is just all-that-happens apparently happening.

So what are ‘we’ without the ‘self’? Essentially, ‘we’ are not. What ‘we’ used to call ‘we’ vanishes (retroactively) when the self falls away.

So what is this apparent person that is left? Seemingly, just an appearance, like everything is an appearance. What is left is just what is happening ‘person-ing’. No subjects or objects, no nouns or pronouns, apply. If the self of a loved one falls away, nothing apparently changes (from the perspective of the remaining selves) other than a very subtle, probably imperceptible shift in the energy of that ‘person-ing’. The ‘person-ing’ continues to have preferences, express emotions (which were deeply embodied during the affliction of the self, and which, as time passes, are then modulated by its absence), and seemingly behave in ways that have been conditioned in the brain. Or more accurately, perhaps, the ‘person-ing’ continues to include ‘preference-ing’, emotional ‘express-ing’, and conditioned ‘behave-ing’. But there is no person.

Is there cause for the still-self-inflicted person left behind, who loves the now-self-less ‘person-ing’, to be fearful about this apparent change? Although this is a scary proposition for the self (after all, another self has seemingly died), in reality nothing apparently changes. The ‘person-ing’ will be indistinguishable from the self-inflicted person. It may have already happened to someone you love, and you didn’t notice. They may not have noticed, until there was no longer anyone to notice.

So what about the radical non-dualists who claim not to be teachers and not to have selves but who nevertheless hold meetings and prattle on about the illusion of self? If the disappearance of the self happens to ‘no one’ (once the self falls away, there is no one left to recognize the disappearance), how is it that these ‘messengers’ are able to deliver this message, and enthusiastically do so?

What makes this message compelling to me (I think) is its simplicity, its internal consistency (it is perhaps the best candidate yet for a ‘grand theory of everything’ that is not hopelessly convoluted, incomplete and self-contradictory), and its resonance with the ‘glimpses’ that have happened when my self briefly vanished. I’m the ultimate skeptic, and this is the first explanation that doesn’t make the skeptic in me go “welllllllllll maybe… but…”. I’m not spiritual, but the scientist in me is totally comfortable with the basic unknowable-ness of everything, and with it the idea of infinity and infinite complexity. This message therefore just makes intuitive sense, to ‘me’. Even though I recognize it is practically useless.

Sorry for going on about it. I’m trying to focus on more creative work, but, just like my astonishing awareness about the nature of complexity (and hence about how the world really works and why we cannot prevent civilization’s collapse) a few years ago, this dawning about non-duality (and hence about who ‘we’ really are, or aren’t) is rather mind-blowing, and distracting. And they’re both hugely difficult, if not impossible, to explain to anyone else.

When you can kind of see something almost no one else can see at all, it starts to haunt you.