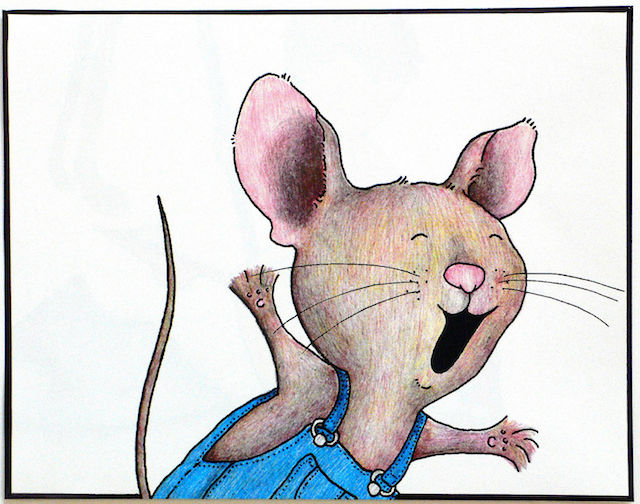 cartoon by Felicia Bond on wikimedia, CC-SA 3.0
The people were worried. The Evil Drumpf had seized power in the kingdom. He had installed his corrupt Minions in positions of power, and was plundering the Commons and threatening war with any neighbour who did not accept his absolute edicts. On the ramparts, the people looked hopefully toward the horizon. The children were crying.

“We need a miracle”, said one man.

“If only a hero would come and rescue us”, said another.

Suddenly there was a flash in the sky, and a luminous grey creature descended to Earth in front of the crowd.

“Get back, it’s a giant rodent!”, warned an observant woman.

But the giant rodent was undeterred, and turned to the crowd, speaking in a calm voice.

“Don’t be afraid”, the creature said, in a voice that seemed to reverberate around the ramparts. “I am here to help you in this time of need. I am — Equani-Mouse!” His name echoed through the crowd.

“Are you going to kill the Evil Drumpf and restore peace and democracy to the land?”, asked a young boy.

“Just tell us what to do to get rid of this demon, and we’ll follow you”, urged an anxious mother.

Equani-Mouse shook its head and smiled, beseeching the crowd to listen. “I am an expert in complex systems, and what you are dealing with is not a problem with one man, but a predicament. The Evil Drumpf is only one of a million connected variables, evidence of a system in late-stage collapse.”

“Drumpf isn’t a predicament, he’s a whack-job”, interrupted an adolescent. “He needs to be confronted and stopped, now.” The crowd buzzed and nodded in agreement.

Equani-Mouse sighed. “What you must realize about predicaments is that they cannot be ‘fixed’. The only approach to them is to understand and accept what they represent, and learn to cope with and adapt to them. Chop wood and carry water, before and after Drumpf, who is only a symptom of a much greater malaise.”

Many in the crowd frowned, and some outright scowled.

“Boo!”, one boy cried out. “The Evil Drumpf is destroying everything. He’s sick, and incompetent. Don’t tell us to accept him.”

“You’re a fraud!”, a man said, looking at Equani-Mouse menacingly. “You’re not here to help us at all. You’re trying to discourage us. You are probably one of the Evil Drumpf’s Minions!”

The crowd grew increasingly agitated and hostile. Finally, a woman called for order and said to Equani-Mouse: “Look, maybe you’re the wrong person, er… creature, for this job. All we want is justice, what our people have always sought: global human equality, a cosmopolitan world civilisation, fair and free trade, the spread of personal liberty and secular democracy to all corners of the globe. These goals are so obviously desirable that it is inconceivable that we should ever stop progressing towards them. Your telling us to just accept this aberration Drumpf is cowardly and unhelpful. Perhaps you could send us a super-hero better equipped for the task of liberating us and getting us back on track.”

The crowd cheered and applauded this comment. Equani-Mouse took a deep breath. and then replied: “You seem to think that civilization is destined to greater and greater levels of progress and humanity. Your textbooks and media and leaders lie, telling you only what you want to hear. You may be living a much better life now than your species did a couple of centuries or millennia ago, but compared to prehistoric humans, you’re less happy, less healthy, less resilient, less sustainable, more destructive, and most importantly less attuned and connected to the wisdom of all life on this planet. Your civilization is a hubristic affront to millions of years of astonishing evolution on this fragile and beautiful planet. Yet all you want from me is to enable you to try to continue what you have been doing, which is disastrous.”

There was silence. One boy said what others were apparently thinking: “What a loser. The giant rodent wants us to accept the Evil Drumpf as punishment for something we didn’t do, as if it were a plague or pestilence from God. Its advice is hopeless. I say we send it packing. We don’t need another hero. All we want is life beyond the Evil Drumpf. We have leaders, let’s follow them instead.”

“You may not realize it, but the Evil Drumpf won’t be able to do anything different from what your last leader, HopiumMan, did. He won’t do anything that is more than symbolically different from what your usurped leader MoreOfTheSameWoman would have done. Look around you. All the systems you’ve built are crumbling. Nothing is working the way it was designed to. You have inadvertently and foolishly desolated the planet and brought about the sixth great extinction of life on it. All your civilized systems are doing is speeding up that process, and causing universal suffering. There’s nothing you can do to change that but accept it, live joyfully in the time that’s left, and do your best to help all the creatures you share this part of this amazing planet with, in small ways that are within your control. A thousand small acts of loving kindness, compassion and understanding, taking joy in others’ joy, and equanimity — these are the ways you all have to do that. What the Evil Drumpf does is of no consequence, and all the news about his deeds is just a distraction causing you stress and grief for no reason.”

“Not buying that Buddhist crap”, said a woman standing near Equani-Mouse. “We can get rid of the Evil Drumpf and his Minions, but we need to be united and forceful, not stand meekly and idly by while he pillages our land and mistreats our people. Let’s join together and send up a prayer to show us the way. Who’s with me?”

The crowd moved toward the woman and slowly the group joined hands and once again turned their eyes to the horizon as the woman uttered her prayer. Suddenly the sky darkened with the shadows of two more flying figures. The wind picked up, and with a flourish a caped woman and a caped man landed in front of the crowd. Equani-Mouse was jostled aside. The woman spoke first:

“Equani-Mouse is wrong!” she shouted. “We can show you the way! I am BeTheChangeHumyn, and this is DeepGreenGuy. A better world is possible. Together we can help you defeat the Evil Drumpf and restore peace, democracy and progress to this great land!” Equani-Mouse winced at the word “progress” but said nothing, shaking its head sadly.

“We must organize, resist, refuse to give up”, BeTheChangeHumyn continued. DeepGreenGuy nodded and chimed in: “There is no honour in passivity. We are all by nature activists, and when we listen we know what needs to be done. We may fail, but we will if necessary die trying”.

Some people in the crowd looked nervous when they heard these last words. But almost everyone in the crowd agreed with either BeTheChangeHumyn or DeepGreenGuy, and as the pair walked away from the ramparts toward the Tower where the Evil Drumpf was, the crowd followed eagerly behind.

Equani-Mouse was left nearly alone, but it shrugged off the rejection. The only people left were a woman and her daughter, who walked over to Equani-Mouse to offer thanks. “They’re not ready for your message,” the woman said. “Their humynism, their activism, their hope, their outrage, it’s a religion to them, a salve, their way of coping.”

“I know,” Equani-Mouse replied, hugging the pair. The little girl smiled at the large grey creature and said, smiling “I thought you were going to try to convince them that there was no Drumpf, that everything that seems to be is an illusion”.

As they walked off toward the forest Equani-Mouse responded, laughing quietly, “Yeah, like that would have worked.”