The Jellyfish, the Silverfish, and Me 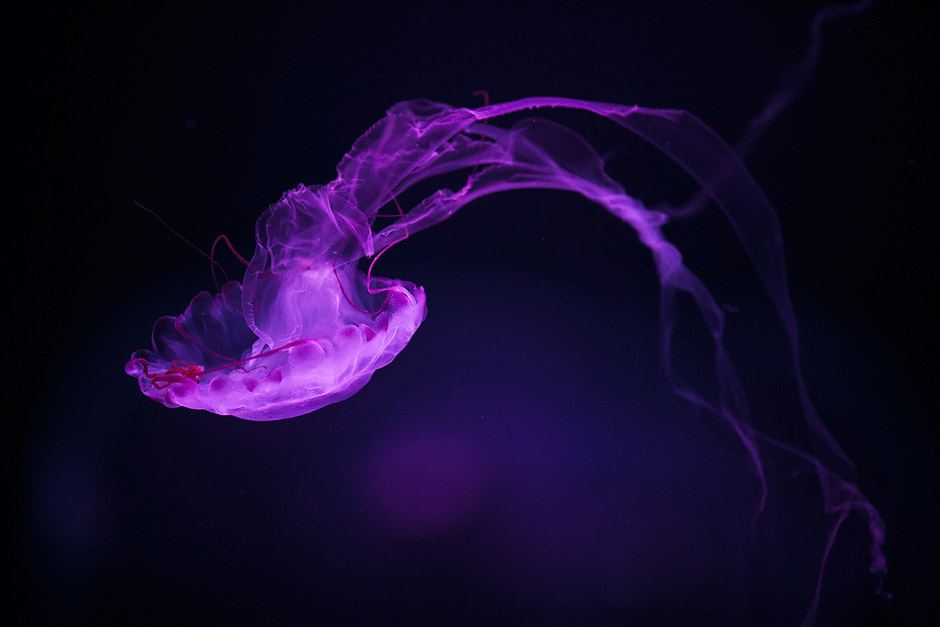 photo by Mitchell Kaneshkevich
About 650 million years ago, jellyfish evolved with, most likely, the first eyes of any creature on the planet. At first, apparently, these were only capable of  distinguishing shades of light and dark. It is not even clear that the evolution of sight from these genes was more than an accident — the genes seem to have many functions unrelated to sight, and may have evolved for other reasons. The evolution was quite a success — jellyfish quickly evolved to have up to 24 sets of eyes, though only the primary set can see in colour. What’s more remarkable is that jellyfish do not have brains, central nervous systems or any of the other characteristics we ascribe to “intelligent” creatures. Yet their eyes clearly “see”. And their eyes are very similar, genetically, to our own.

Is a jellyfish conscious? Does it have a self? If it doesn’t, how can its sophisticated behaviour evading predators and catching prey be explained? How could “instinct” be such an astonishingly complex quality that it can drive such effective behaviour in utterly different sets of circumstances without any reference to a ‘self’ to be protected and to survive?

I have watched silverfish (relative newcomers on the planet compared to jellyfish, emerging only 400 million years ago) show evidence of considerable cleverness at evading capture. They instinctively flee light (and they move incredibly fast), but they also will stop and hide in crevices in full light where they cannot readily be seen, rather than running to darkness further away. And they will not take a straight path, but rather a zigzag, uneven-speed path that makes it harder to catch them.

My observation of these two ancient and “primitive” creatures leaves no doubt in my mind that their actions are deliberative (etymology: “well-weighed, considered”). They appear to make decisions in the moment that optimize their chances of survival. In the case of jellyfish, they do so without brains or central nervous systems; the jellyfish has to ‘decide’, for example, when to use its venom (based on the chemistry it senses in the object it encounters) and when to conserve it (ie when the object is neither predator nor prey).

As a non-dualist, I have come to accept that the self (human and otherwise) is an illusion — it doesn’t actually exist. What we think of as ‘decisions’ made by us are in fact the only thing we could have done in the circumstances, drawing on a combination of the ‘inherent’ biological nature and the ‘learned’ enculturated nature of the creature ‘we’ presume to inhabit. The ‘deliberation’ itself is not conscious. ‘We’ (our ‘selves’) merely ‘consciously’ rationalize the decision after the inevitable action has already been taken. Our actions are no more conscious than those of the jellyfish and the silverfish. No self is required for the appropriate action to be taken, though one may be employed (pointlessly and unwarrantedly) to regret, pride ourselves for, or otherwise second-guess, the action taken.

Suppose we look closer at what happens when an apparently simple ‘decision’ is made. When the jellyfish is evading a sea turtle, or the silverfish is evading my shoe, or I am evading a car coming at me, this is what seems to be actually happening:

But while the energy is real, the brains, the neural networks, the creatures, shoes, cars, and organs of motility are not. Also, since there is no time, none of the above actually takes place in time.

So let’s try again. What is really happening here?

But still, you may be thinking, that energy is in separate particles in space and the conversion happens over time. Yet there is no separate anything, and there is no time. This way of thinking about what is happening is evidently still wrong. Why would we be so deluded by our minds and senses to believe this is reality?

We can only make sense of things in accordance with the tools we have to make sense. The evolved retina stores and ‘models’ the images it ‘reads’ from the photons in a two-dimensional raster, and the brain not surprisingly interprets what it ‘sees’ as something having separate two-dimensional substance. The brain also files as ‘memories’ successive images, creating a model of sequences of apparently two-dimensional images (and apparently three-dimensional when it blends the images from both eyes into a stereo image) that seemingly happen over what it perceives as ‘time’ (having invented time as a representational model of these sequences of images to ‘make sense’ of the sequence). This is simply the brain imagining, modelling reality as discrete sets and sequences the best and only way it can. It has nothing to do with true reality, which is just timeless energy appearing as nothing and everything — appearing as all-there-is and what-is-happening.

Here’s a metaphor — yet another inadequate model of reality that cannot hope to capture it, but might perhaps be helpful in getting a sense of it nevertheless. Imagine a 2GB movie in .mp4 format. We can’t make sense of the bytes directly — a brilliant alien species coming across the file in space might be utterly unable to ‘decode’ it. But, filtered through our senses, it is a powerful representation of reality, time and space. It’s complete. What apparently ‘happens’ in the movie is the only thing that could happen, under the circumstances of its production — events seemingly happening in time and space, with apparently real separate characters experiencing real things.

We can get so caught up in the movie that we ‘experience’ it as real. We may even cheer on and encourage the heroine, and boo the villain, towards a desired ending, although we ‘know’ none of this is real, and we know that the ending is ‘already’ as present and complete as the opening credits. Our interventions have no effect, yet we react as if they might.

Analogously, life — all-there-is — can be thought of as a meta movie. When ‘we’ apparently witness it, it appears to represent the reality of real people and depict actions happening over time. It appears that interventions should be possible, decisions between alternatives that will affect the outcome. But that is only an appearance, an illusion. Like in the 2GB movie, all our emotional and intellectual engagement is futile. The ‘movie’ all-there-is is already, timelessly, complete.

The mind cannot grasp this. It needs the model to make sense of things, and all-there-is is vastly too complex to be modelled by a self/mind that is itself a construct, a by-product of the patterning of the brain, which can only ‘know’ what it can represent. Our feeble brain equates ‘completeness’ with everything-being-foreordained, but nothing is foreordained; it is contingent on all the unfathomably complex circumstances apparently present when something apparently happens. But those circumstances are the energy of nothing and everything. Our struggling brains have to separate everything out in space and time to make any sense of it at all, but in so doing just create a model of reality that is infinitely less than the ‘natural reality’ of all-there-is.

I have in past described the self as a disease, an affliction. That is because, similarly to the way the mind is able to conjure up and then become anxious about all kinds of possible eventualities, the furious patterning that creates the self causes the hopeless sense that the self can and ‘should’ intervene in every situation, and creates its own confirmation bias by grasping at the situations in which the rationalization of the self most closely matched what apparently happened, and re-rationalizing the situations in which things apparently didn’t go as the self planned, to bring what had already been unconsciously decided into line with the self’s explanation for how ‘it’ made that decision. A lot of furious and futile energy accomplishing nothing, except perhaps to cause neurosis and other suffering. The self is like a useless and frustrating piece of very buggy software, or a virus, that apparently comes bundled with a very large brain capable of abstraction, and seems impossible to eradicate.

Natural reality — not the sad simple representation our minds perceive — is complete. You might say it’s ‘perfect’ but it’s not that and more than that. It is nothing and everything, one, timeless, all-there-is. There is no room in it for separate selves or separate anything.

None of this will make any sense unless there has been a ‘glimpse’ of it, when all-there-is is suddenly seen, when there is suddenly and briefly no self, no ‘you’. Thankfully my self has, on several occasions, left the room.

These glimpses are indescribable, but since several people have asked me about them, here’s a probably foolish attempt to describe them. Maybe if you’ve had one, some of this might resonate with you, and then the rest of this article might make some sense:

it is suddenly obvious what is really real —
oh, this! — of course!
why wasn’t it always obvious?
there is no need to do or strive for anything,
no need for purpose —
everything is just naturally as it is.
there is no fear of it going away,
as it’s recognized that it’s always there, timeless.

it is a remembrance, a connection to all other glimpses,
full of wonder, unveiled, unfiltered, unrestrained,
startling and unexpected, full-on,
open and with complete acceptance, without resistance.
it is totally stunning, completely alive,
intense in colour, sound, smell, flavour, feel.
in it, everything is effortless, free of anxiety and fear,
peaceful, still, weightless, unconditional.
it is a cheshire-cat-eyes-wide-open-endless smile
full of love (but of no one for no one),
at once an infinitely bright wow and an infinitely gentle mmmmmm.
it is like ‘awakening’ but only metaphorically, not really —
no one has awakened.
the ‘I’ has just vanished.

what it is not:
it is not awareness, presence, consciousness,
wisdom, knowing, or understanding.
it is not bliss
(since non-blissful things happen in it,
though they are all taken lightly in stride).
it is not ‘I am’, not a higher ‘self’,
not anything personal or emotional.
it is not ‘more’ or ‘more of’ anything —
it is utterly different from anything
the self can experience or imagine.

what can somehow intuitively resonate with or evoke it, for ‘me’:
light — candles, path lighting, street lamps, a fire’s glow —
they somehow have a ‘wavelength’ that recalls the glimpse.
music, if it’s wordless and not connected to a personal memory.
sense perceptions in unperturbed, ‘uncivilized’ moments —
the whisper of the wind, the scent of rain,
the reflection of the sun or moon off the sea
or of light on a raindrop on a leaf at nightfall.
non-verbal sounds — birdsong and pounding surf and purring
and coyotes howling at the moon —
(language liberated from abstraction, judgement and intent),
scents that bypass the self’s circuitry — sandalwood, raspberries, lilacs,
and events that transport the animal creature beyond the self’s influence:
the sudden yes! of realization of something that was long elusive,
or the first limerence of falling in love.

But this doesn’t describe the glimpse at all. There is no describing it, no understanding it, no experiencing it. There is no path. One moment the virus is doing its worst, afflicting an innocent creature with its mad delusions. And the next moment there is nothing and no one ‘there’ or anywhere, and never was.

The jellyfish and the silverfish are free. For us, the afflicted, a life sentence. We wait, hopelessly, for parole.

This entry was posted in Creative Works, How the World Really Works, Our Culture / Ourselves, Radical Non-Duality. Bookmark the permalink.

8 Responses to The Jellyfish, the Silverfish, and Me