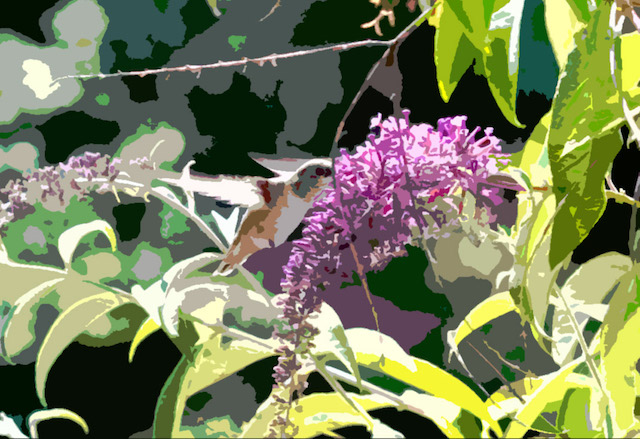 there is no word to describe this moment —

it is not silent or quiet, because while there are no words being spoken or thought, there is yet sound

it is not still, because there is movement, though without plan, direction or purpose

it is not peaceful, because it is not about the absence of anything that is not calm or serene

it is not presence, because it is not about witnessing something apart from a witnesser

this moment arises, or appears to do so, before and outside of language, and is recognized (though by no one) before thought or concept or naming attempts to make sense of it, and is independent of sense-making

Heidegger speaks of young humans being “thrown into a clearing in an inherited world” of language and culture in which they then self-orient; this moment is outside of that world — it has no need for that world, its conceptions and conceits, or for meaning at all

it is not even beingness, that awkward new-agey attempt to eff the ineffable, so hopelessly attached to the being that it is ness-ing; it has no need for beings to see it —
trees falling in the forest be damned

it has these apparent qualities — (apologies for the ‘-ness’s) — timelessness, obviousness, resonance, wondrousness, unexpectedness, effortlessness, unconditionalness, intensity, lightness (but by no means an ‘unbearable’ lightness); though it has these qualities not in these words’ dictionary sense but more metaphorically, and I could not presume to explain how

a poem full of descriptions of wild creatures and wild places, were I able to write one even half-competently, would probably convey this moment much better than a list of qualities or assertions about what it is not

so instead I will suggest a phrase for it, a phrase that attempts to capture the essence of this moment that cannot be described with English words: llon nur tiu cxi

llon- is a word root from the Celtic that dates back to ancient times when the words and ideas for ‘stillness’ and ‘joyfulness’ were, perhaps tellingly, the same (in Welsh llon means joyful and llonydd means stillness); this might be what the ‘peace that surpasseth understanding’ was getting at

and nur tiu cxi is Esperanto for ‘only this’, a pointer perhaps to that which is nothing and everything, beyond duality

although the Welsh ll is a challenge for English speakers, pronouncing the entire expression as ‘hlon-noor-tioo-chee’ is good enough and has a nice lilt to it

so, llon nur tiu cxi — ‘this calm and joyful moment that is all that is’

4 Responses to this moment