20 Lines of Work to Encourage Your Kids to Avoid

(Haven’t done a rant for a while; let’s see how many people I can inadvertently offend this time around. Be forewarned that this post contains immoderate, highly-judgemental language, inadequately-defined terms, Oxford commas, and unsubstantiated opinions. I’m not proud.) 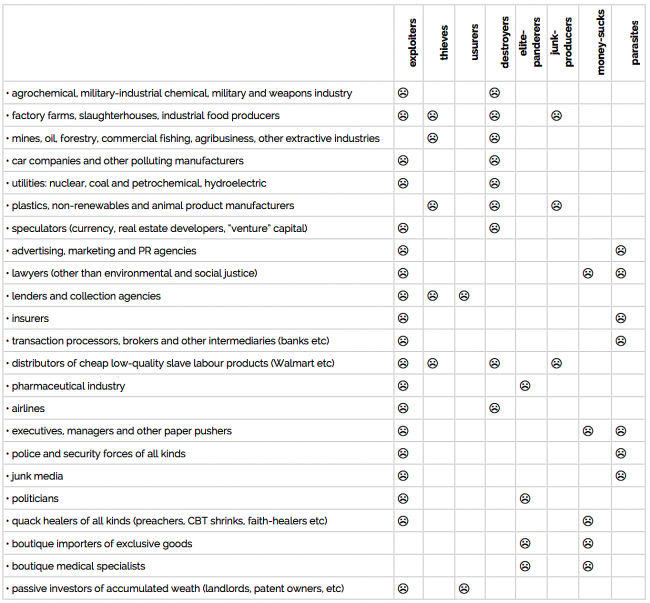 One of many reasons it’s such a struggle to power down the massive destructiveness of industrial civilization is that many of the industries that cause the most harm to the planet and its aggrieved residents are the most lucrative to work and invest in, and in some cases they remain among the most prestigious roles in our society.

So I decided to make a list of the criteria that make a particular line of work particularly deplorable. I came up with this list:

The reason that seemingly-harmless elite-panderers and money-sucks are on this list is that the vast amounts of money they acquire (and sometimes launder) are often thence removed from general circulation — it’s passively invested, loaned out with interest, used for speculation, used to buy elite luxury goods, snorted etc. The key to a healthy economy is that money keeps flowing, and these guys overwhelmingly stop it up. (They’re also on the list because they’re generally assholes.)

Then I went through the industrial classification lists to compile a list of possible contenders for my “Rogues Gallery”, and checked off which of the above criteria of deplorableness I felt they met. Of course I jury rigged the list so that the lines of business I worked in before I retired just missed the cutoff. The lines of business that IMO met at least two of the criteria, in no particular order, are shown in the table above. This is entirely subjective and engineered to profile the lines of business I generally least respect, so take it with a grain of salt.

I should stress that there are some people and organizations in many of these categories that probably don’t meet the criteria and don’t belong on the list. Sorry for offending you if you’re one of them. There are also many that “greenwash” — advertise endlessly and dishonestly that they’re the exception (and sometimes protest furiously, and much too loudly, that their whole much-maligned industry is actually doing good for the world).

It’s hard to be a good guy in this economy. But perhaps we can aspire to be less bad, and avoid the industries and professions that are doing the worst to our planet. We can at least stop holding them in high esteem, and instead of congratulating or nodding admiringly when someone announces they’ve just joined or work in these lines of business, we might consider instead raising an eyebrow and ask (if you can pull it off) whether they eventually hope to find a more ethical line of work. And we can at least not give any of these industries any more of our money than is unavoidable.

And we can try to discourage our kids from these kinds of work — they’re going to be pretty unpopular, and pretty useless, when TSHTF. Sadly, it’s hard to find work that isn’t on this list these days, so until there’s appropriate training for them in how to start their own, ethical businesses, we can’t blame the kids for doing what they must to make a living.