Some things that used to be important no longer seem to matter. 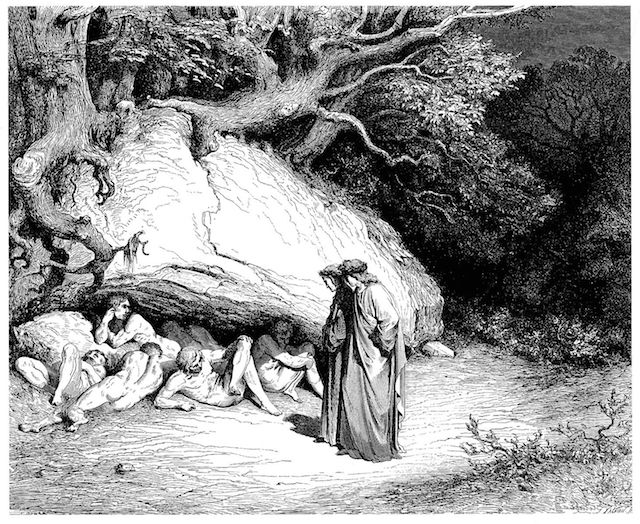 image above from Gustave Doré’s illustration of Dante’s Inferno, in the public domain per wikimedia

The word limbo has a (convoluted) religious meaning, but I mean it here in its colloquial and etymological sense of being in no-one’s-land, caught between two places or forces. The image above, from the canto on the Virtuous Pagans, who are “punished only in that they are separated from divine love”, pretty much captures how I mean it.

Limbo is not a spiritual place.

It is hard to overestimate how a dramatic shift in your worldview messes with your mind, and colours everything you think, do, and believe. This is especially challenging when this new worldview differs sharply both from what you actually perceive to be true, and what everyone around you both perceives and presumes to be true.

So when my growing appreciation of how complex systems work persuaded me that all attempts to reform or sustain our industrial civilization were doomed to failure, and that this civilization will slowly unravel over the coming decades, with staggering consequences, I hardly dared share this new understanding with others. I was sure they would see this belief as nihilistic, unwarranted and unsubstantiated pessimism, and many did, and do. Aside from pointing to my reading list, I can’t even explain exactly how I came to this realization, which is in any case unprovable. It just makes sense to me, now, based on everything I’ve read and studied, hours of internal debate, and the weight of evidence available. It’s intuitive more than anything else. I don’t want to believe it, but I do.

That puts me in a kind of limbo when I’m talking with people who are embarking on or in the midst of long-term careers, or raising children, or involved in direct action to try to reform civilization’s systems — in short, anyone who’s invested in civilization’s continuance or improvement, including me. I often review friends’ business plans, as if I believed any new business has a long-term future. I talk to my kids about day-to-day matters, ignoring the elephant in the room. I encourage and celebrate the champions of change who are trying to make this world a better place. But somehow, from this limbo, it all rings hollow now.

So my latest realization, that there really is no ‘me’ or ‘you’, or any separate anyone or anything, and hence no self or mind or soul or free will or control or choice or purpose or meaning or responsibility or time or space or death of anyone, magnifies this cognitive dissonance many-fold. It is even less provable, even more out of alignment with my actual perceptions and with the worldview of everyone around me. I certainly seem to exist as a separate being with free will, yet I somehow now know I am not. Everything I think, now, everything I do, every old belief or idea I catch myself still acting as if it were true, is empty, meaningless, even preposterous. A modern-day Virtuous Pagan, I wander around in a fog behaving as if I still believed in a future for this planet only modestly different from how it is today, and as if I still believed I exist and have control over this strange body I always thought I inhabited. Living in limbo.

I am not complaining. As Dante explained, Limbo is not a half-bad place to be. It offers certain bragging rights, if only to myself. It’s pretty easy, quite peaceful, and surprisingly joyful. The cognitive dissonance is annoying, but hardly excruciating.

Probably what is most troubling about this particular limbo is that a lot of things that used to really matter to me, don’t seem to matter much anymore. Here are some of them:

Limbo is neither in, nor awakened from, the illusory dream of the self. It’s the demi-monde, the in-between, the empty pause, the eternal place of waiting by no one for no thing.

The non-existence of the self is the only thing that makes sense, or that, in hindsight, has ever really made sense. From early childhood there have been brief, astonishing glimpses of what was then obviously really real, moments of wonder and pure unseparated being when I disappeared. And from early childhood there has been this feeling, this intuition that what’s here in the world that everybody calls real, isn’t quite right, doesn’t ring true, can’t possibly be real. That intuition, I know finally, was right. But knowing that offers no solace.

There is no path from limbo to anywhere else.

To everyone I know and touch, I’m sorry I can’t be fully with you, if I ever was, in this seemingly real world filled with so much dissatisfaction, longing, suffering, anger, fear and sorrow (and some fleeting moments of joy). I am no longer quite in this world. I seemingly do what I can, the only thing I can do, waiting without hope for the other, truer world that no one here seems to know about, to have glimpsed, or to remember.

I remember it, and when/if I suddenly disappear nothing will really change, and you won’t notice a difference; you won’t miss me. The character known as Dave will continue to read his lines and play his part. But there will likely be a little less self-ishness, a little less personal suffering. A little shift out of limbo, to nothing and everything.