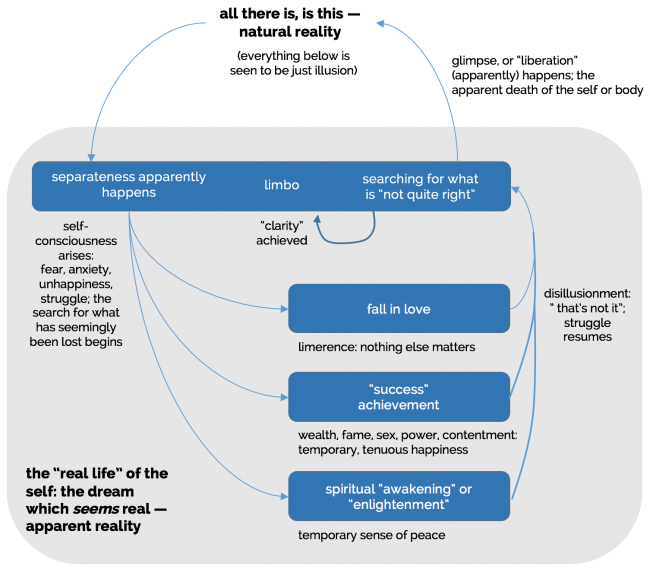 So this is what it’s all come down to: a hopeless realization that this apparent person has no free will, no control or choice, no responsibility or agency — doesn’t exist at all in fact. That what we call ‘real life’ is apparently an ephemera, a dream, a tragic, totally-unnecessary and accidental consequence of the brain’s growth to the point it is able to create a model so sophisticated it can create an identity within it and then persuade that identity it is real.

This cannot of course be proved — a character in a dream cannot prove to the other characters that they are all dreamt. So why would ‘I’ want to believe such a thing? ‘I’ cannot help myself; it’s intuitive, it’s compelling (complete, internally consistent, and explains everything), and it resonates with some ‘glimpses’, some ‘memories’ of something other, something truer than what seems real the rest of the time. I certainly don’t want to believe something that creates such cognitive dissonance, makes navigating this world more difficult, annoys many of the people I care about, and leaves ‘me’ in a frustrating state of limbo. And achieving intellectual clarity about it is of no help whatsoever.

But this is for now what I believe, and I’m learning to deal with it. At some point in early childhood my brain created my self, and suddenly the world that had been obvious, perfect, awesomely complex and wondrous, became suddenly terribly complicated, bewildering and dangerous, in need of ‘navigation’ on behalf of this previously competent character, this organ-filled bag of skin. In pre-school years ‘I’ seemed to drop away and re-emerge quite frequently, I think (and have done so occasionally since then, in moments I call ‘glimpses’).

Right from the start, ‘I’ didn’t like this separation, this sudden responsibility. I sensed no reason for it, and it filled me, as ‘I’ grew more separate (with encouragement from everyone in ‘my’ culture, the other deluded selves) with fear and anxiety. During the glimpses there was (and is) immediate recall and recognition of previous glimpses and of what was before ‘I’ — what eternally is —  and a realization of the needlessness of anxiety, and indeed the needlessness of a self. But nonetheless my self has continued to grow stronger, unable to help its self but still foolishly sure of its self, and incidents of its falling away have become rarer.

Like most ‘people’, ‘I’ have (apparently) achieved some considerable successes in my (apparent) life, and these successes gave my self some solace and a sense that its struggle was ‘worth it’. And ‘I’ have also experienced the limerence of falling in love — that amazing chemical cocktail that obliterates the sense of self and separation and makes the body feel too good to be anxious, angry or sad. But they never lasted, these illusory moments of escape from the struggle, from the search, and sometimes from the self itself. There was always a let-down, a fading away of the good feelings, a disillusionment. And then it was back to the struggle, the sense that something very basic was not quite right about this life, and the search for that magic: “Yes — aha, that’s it, how could I not have seen, not remember?”

Achieving an intellectual understanding of all this has provided very little solace — usually ‘I’ find that even when learning something is saddening or upsetting, it is better to know. But knowing you’re in a dream is of no value if you can’t wake up. Getting clarity about why you’re in a prison serving a sentence of life without parole, when you did nothing to deserve it, doesn’t help make the harsh term or conditions more bearable.

And my study of radical non-duality has led me to understand that there is no path — that what all the well-meaning gurus and spiritual ‘teachers’ and ‘leaders’ do is convince the desperately seeking self that it can transcend its self, which is a tautological impossibility.

The best that the self (including the selves of gurus and spiritual ‘teachers’ and ‘leaders’) can hope to do is to find ways, with the help of others, to make the prison of the self more comfortable, and to help others do likewise. And of course the self cannot do so voluntarily, since it doesn’t really exist. If the inherent nature of the creature is to do this, with or without clarity, it will do that. This creature’s character is selfish and tired, and there are limits to what and how much it’s prepared to do to heal and comfort others (no limit on what it’s prepared to do to heal and comfort itself, however). But it’s doing what it must, and that, I’m told, has included doing things that have helped others.

And of course ‘I’ can’t help hoping, absurdly, that my self will fall away if only I create the right conditions for it. That is what selves do, in their coherent or incoherent endless search for what they cannot find — their own demise. In the meantime, my self still seeks escape in love, in sex, in accomplishment, and in learning new things, though it knows, now, that disappointment will surely follow.

Would the world be a better place if the self had not evolved to needlessly afflict us? Radical non-duality’s answer is probably not, and that we cannot know. The belief in the above description of reality (and my belief in it remains tentative) changes everything (in how I relate to the world and to my self) and nothing (since ‘I’ don’t exist). That’s why I can’t stop writing about it.

If my self were to ‘permanently’ fall away it is hard to guess what this character that ‘I’ have infected might do without ‘me’. Probably just drop out of public view, give up all ‘my’ possessions (including, I suspect, this blog), do joyous things with those it loves, and just wander the world, untethered, in wonder. That seems to have been the propensity of this character named Dave before ‘I’ intervened. I can only hope, fool that I am.