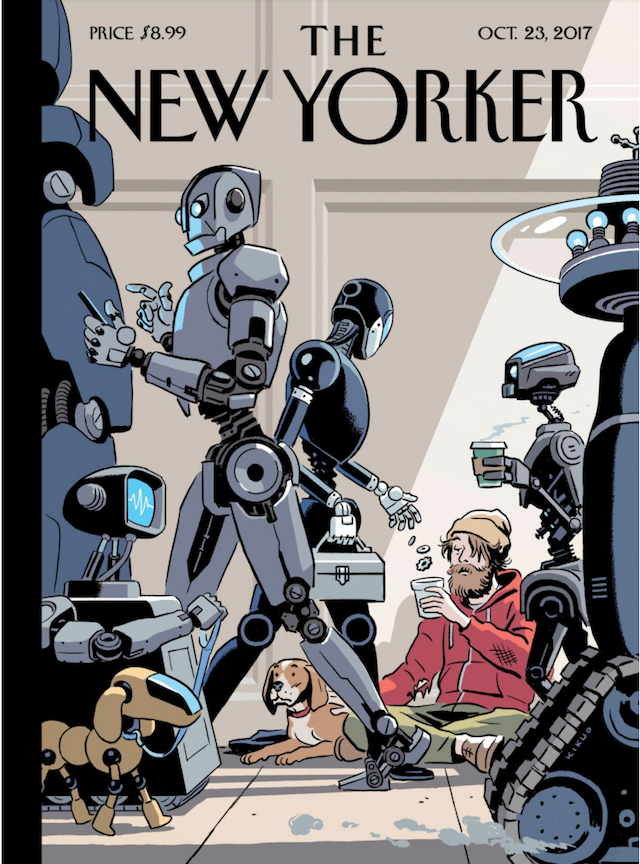 A dark time for me, finding myself absurdly triggered by completely ordinary events, and aware of the impossibility of letting go of my anxious, fear-driven, hypersensitive, reactive, stress-riddled self. Meanwhile, day to day events in the echelons of power get more and more surreal and alarming, and I can’t quite get myself to turn off the non-local ‘news’ completely; for no good reason, I just have to ‘know’. To know this is my biologically and culturally entrained self just doing the only thing it can do brings me no comfort. Not depressed about all of this; just drowning in the cognitive dissonance.

Feeling like a canary in the mineshaft, and something does not smell right. 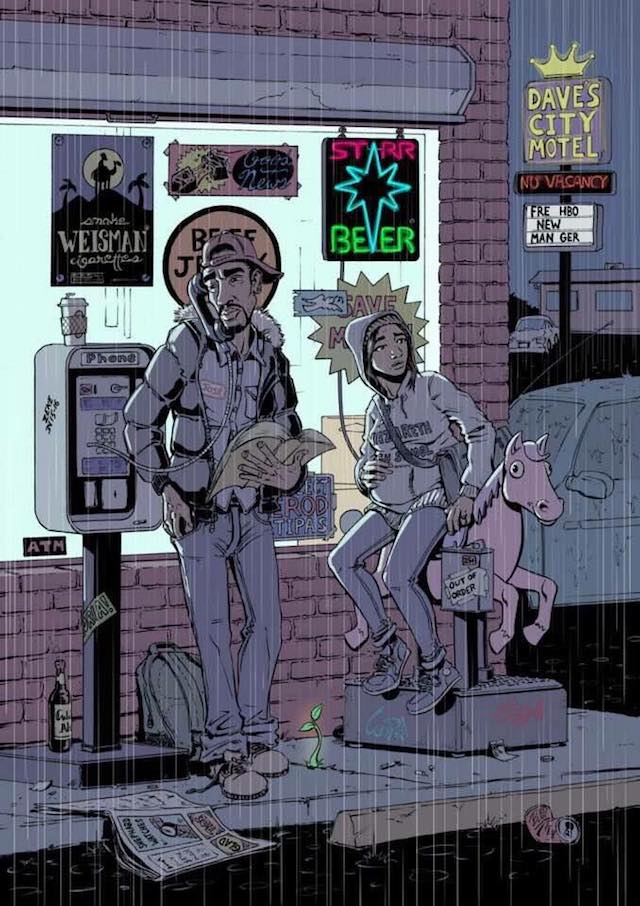 Christmas card “José y Maria” by cartoonist Everett Patterson. Thanks to Dave Bonta for the link.

When There Is No Insurance Any More: The latest from td0s describes our investment in ‘stuff’ and what happens when we can no longer insure it against loss, because the risk of loss is now too great: “Is there a greater fear than being reset to zero after years and years of numb drudgery, all of it in the service of stacking up a bigger and bigger pile of things? The entire edifice of consumer society rests on the idea that we will work today and that the things we buy will still be ours tomorrow. No longer able to live in the world, to see the providence in the fields and streams, only the store shelves can keep us alive, and so we tithe the gods of chance praying that the future is long and uneventful.”

Listen for the Howl: If you didn’t read my short story that referenced td0s’ remarkable post Boldly Through the Darkness, take a moment to read it. 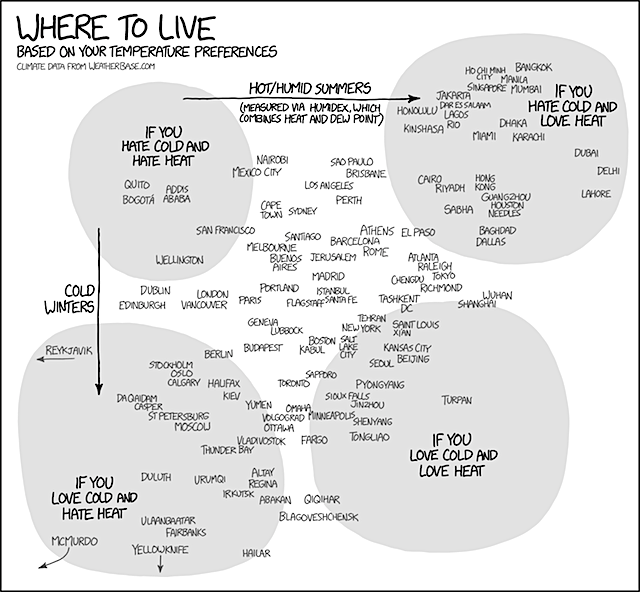 Where you should live depending on your temperature preferences, from the inimitable xkcd. Before you move, you might want to consider how your new home will be affected by climate change

There Is No Jim Carrey: Thanks to his friend Jeff Foster, Jim embraces radical non-duality. And scientists continue to come up with findings that support this message; most recently comes the finding that the universe shouldn’t exist, and a biology book that asserts you have no free will.

Census Maps: Since a picture is often worth a thousand words, Census Mapper now allows Canadians to get a visual representation of census data by census division. The app breaks data down into deciles so you can see how your neighbourhood stacks up with others in income, home ownership, costs of living, demographics and other data. Thanks to Jens and Alejandro for developing it!

Best Science Books of 2017: The always-excellent BrainPickings (Maria Popova’s labour of love) lists her favourite new science books of the year; a tremendous list. Thanks to Tree Bressen for the link. 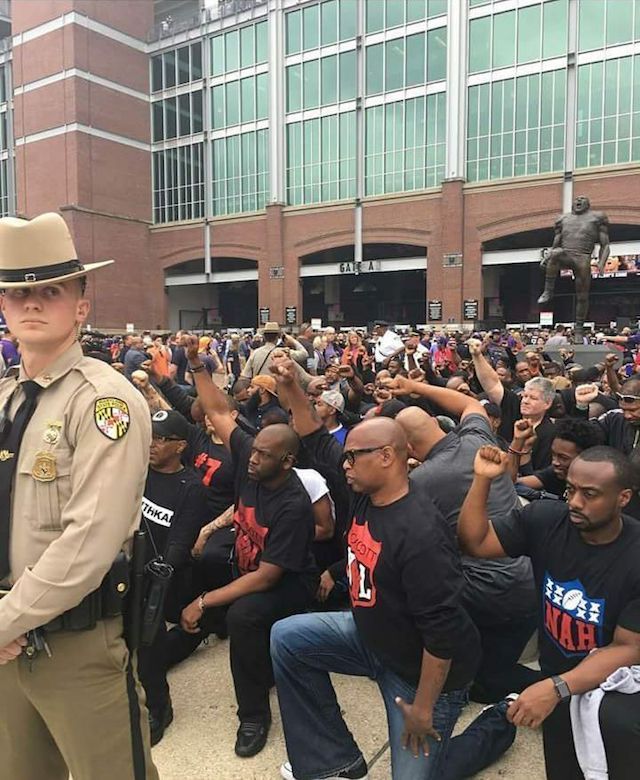 Taking a Knee at a Ravens Game — from Facebook, original source unknown

Enough is Enough: Satirist “Jonathan Pie” comments on the latest absurdities of 45. And here’s a very revealing interview with the man behind the satire.

Canada’s Doing Just Fine, Thanks: A writer humorously tells the US Ambassador to Canada that Canadians don’t need or want any help to be “as successful as Americans”.

Blaming the Victims: Millions of people turn to drugs or alcohol when there is no other way they can find to cope with their suffering. The cost of this is multifaceted: the health costs (money and misery) of and to the users, the misery they (mostly unintentionally) inflict on others as a consequence of their actions and inactions, the crimes some commit to pay for the drugs, and the massive cost of the absurd “war on drugs”. It is so easy to proffer simple solutions: mostly ban the drugs (this has never worked and actually increases the cost), and blame the victims. Thousands of people are now dying each year of fentanyl poisoning — toxins put into street drugs by uncaring dealers and pushers to reduce their cost and to increase the dose (to encourage ‘repeat customers’). Meanwhile millions of people suffering from chronic pain, who have been prescribed opiates for years for pain conditions that never let up and for which there is no known medical cure or effective alternative treatments, are now demonized and presumed to be addicts at a high risk for ‘abuse’, and deprived of essential pain relief under harsh hew prescribing rules in the latest blame-the-victim chapter of the endless “war on drugs”. What are they to do? If they can no longer get their prescriptions filled safely by their doctors (many of whom are being threatened by medical associations, insurers and political agencies to reduce opioid prescribing across-the-board), they are forced to turn to the streets, swelling the numbers exposed to fentanyl poisoning. Vicious cycle. We never learn. 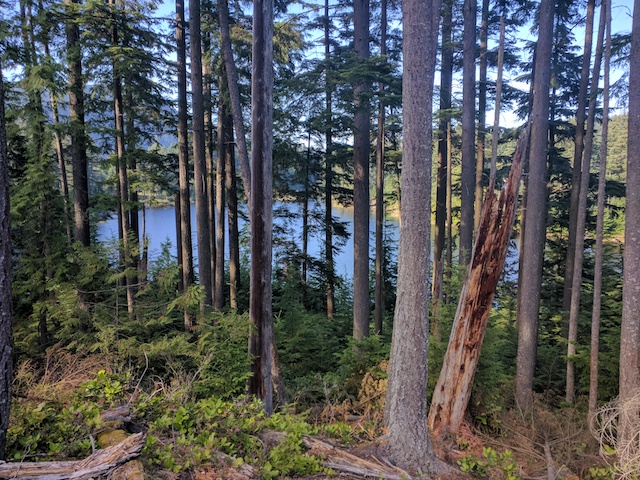 Hawk Raised By Eagles: The story of the tiny red-tailed hawk on Vancouver Island that muscled itself into a young eagle family in their nest, and ended up being raised as if it were an eagle.

Iconic Tree Replaced on Building Top: A condo in English Bay (Vancouver BC) has long been the home to a famous rooftop pine tree that the builder/owner insisted be there to recognize the average height (60m) of the temperate rainforest that had been felled to construct the English Bay community. When the tree died, it took two years to find a suitable replacement, and half a million dollars to get it up into place on the roof. Out on her balcony, Kelly Gavin snapped the shot at sunset just as it was being lowered into place, that the CBC used at the top of its coverage. Now waiting to see if the bald eagles return to nest there.

Fox and the Whale: Quirky, unsentimental animation from Robin Joseph.

Faster Growth Means Fewer Nutrients: Ironically, as the increased amount of CO2 in our atmosphere allows plants (which need it to live) to grow faster, they are producing food with fewer nutrients (less time for them to mature and metabolize). That means the food we eat is poorer too. Thanks to Tree Bressen for the link.

I Want My Bonus Years: The writer urges men to start dating women their own age, for everyone’s benefit. (NB: This is a NYT article, so if you’ve used up your “10 articles per month quota” you won’t be able to read it, or re-read it.)

The Case for Not Being Born: Philosopher David Benatar argues that life and death both entail enormous amounts of suffering, so it is better not to be born (or have children) in the first place.

Giving Up Butter: The 5 Stages of Grief: A hilarious take on the naming of butter substitutes. Thanks to Ben Collver for the link. 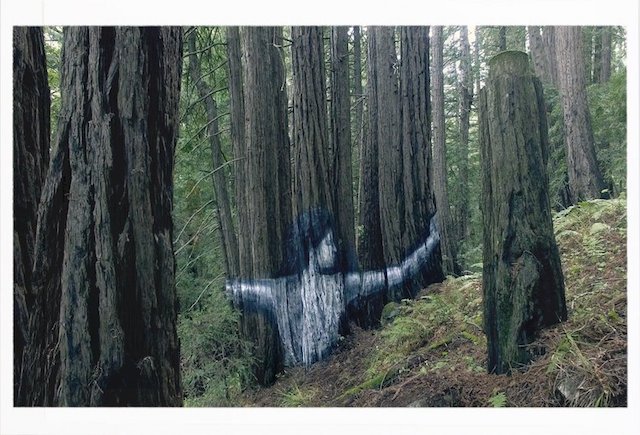 From Rachel Carson: “If you write what you yourself sincerely think and feel and are interested in, the chances are very high that you will interest other people as well.” (thanks to BrainPickings for this quote and the two that follow)

From Seneca: “There are more things … likely to frighten us than there are to crush us; we suffer more often in imagination than in reality.”

From James Baldwin: “You have to go the way your blood beats. If you don’t live the only life you have, you won’t live some other life, you won’t live any life at all. That’s the only advice you can give anybody. And it’s not advice, it’s an observation.”

From Dave Snowden (thanks to Chris Corrigan for the link) on coping with complexity:

3 Responses to Links of the Quarter — December 2017