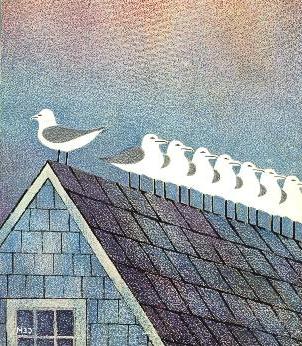 During today’s conference call of the Municipalities in Transition group, I had the pleasure of being introduced to Tom Henfrey of the Schumacher Institute, who introduced us to the term “coercive isomorphism”. I thought the term was intriguing and couldn’t resist researching it a bit. Here is what I learned:

We like to think that competitive markets encourage a diversity of approaches and strategies that differentiate organizations from the rest of the pack. But research suggests that the players in any particular industry, especially once it reaches a certain size, are constrained by suppliers (who are always seeking to standardize in order to scale up production volume profitably, leading to “coercive isomorphism”), by fear of failure from risk-taking (leading to copycat strategies ie “mimetic isomorphism”), and by employees (who, as skill and experience requirements rise, tend to be a smaller and smaller pool who move between competitors, come from similar educational and experience backgrounds, know each other, and are susceptible to groupthink, leading to “normative isomorphism”). The result is a tendency for greater and greater sameness and less and less diversity, innovation, real differentiation, or distinctive competence. So what’s on offer to customers is mostly “differences” of superficial style, appearance and brand, rather than differences of substance. (My reckless paraphrasing of this paper)

I started thinking about whether this happens not only in organizations, but in societies as well. It’s pretty clear that it does. We are constrained by what suppliers in an increasingly oligopolistic industrial economy provide, such as what we can buy to eat, and who we can vote for who actually has a chance to be elected. We are constrained by fear of failure and groupthink in our group activities, such as “poor” grades in school, and “needs improvement” ratings at work, which is possibly why so few take chances in their work lives, and why the boldest ideas in many groups are the first to be jettisoned. And we are constrained by the ever-increasing homogeneity of every aspect of our environment and lives, such as the uniformity of houses (“little boxes and they all look just the same”), socially-acceptable modes of dress, and the pressure, in a world of such uncertainty, to “fit in”. Cultural isomorphism.

This is an aspect of what Terry Glavin in Waiting for the Macaws wonderfully and poetically calls “The dark and gathering sameness of the world“.

And perhaps it’s also what ee cummings meant when he wrote: “To be nobody-but-yourself — in a world which is doing its best, night and day, to make you everybody else — means to fight the hardest battle which any human being can fight; and never stop fighting.”

I think what makes me most excited about the world after the current collapse, is the near certainty that the emerging human societies — necessarily tiny and local and low-tech and reconnected with and not disruptive to the rest of life on Earth — will be staggeringly diverse. They won’t travel far, because they’ll have neither the means nor the need to do so. So they won’t be able to merge with any other local human societies to create anything of scale, and hence will be immune to this cultural homogenization and isomorphism that has so diminished and desolated our world.

But I wonder: While there is unlikely to be isomorphism between societies, even those in geographic proximity, will cultural isomorphism be a factor within these small societies? To what extent is diminishment of the differences in beliefs and behaviours between individuals in a tribe not only inevitable, but definitive of its culture? Is there only a culture when there is a certain degree of sameness among members, as they become who they are largely (perhaps almost entirely) as a result of interaction with others? And what is the “tipping point” at which increasing cultural isomorphism ceases to be beneficial to the tribe (allowing social cohesion, consensus, collaboration etc) and begins to be dreadful (for all the reasons described above and more), and is our species by its nature fated to always cross it?

No answers here, but the questions, I think, are invigorating.