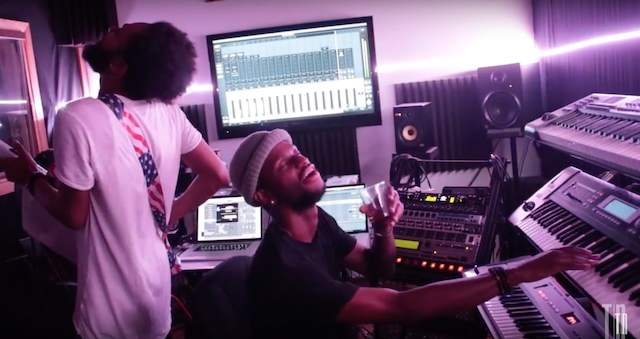 What if you could take the best parts of a good song and amplify, loop, remix and riff off them? Would you end up with a better song? And whose song would it be then?

This is an issue that became more prominent a few decades ago when musicians began ‘sampling’ others’ music and incorporating it into their own compositions. Since then it’s become quite bewildering: You have artists creating mash-ups of many popular songs by adjusting the pitch and tempo to match and then blending parts of each into a ‘new’ composition. You have artists syncing and blending many versions of a song by performers all over the world into a single performance. You have DJs, who started just creating mixtapes blending together collections of popular songs, but then added their own overlays on top, or looped parts of some songs and added them to the end of the original song as a kind of extension and homage, to create “remixes”.

Now, on Soundcloud and other music archives, you can have combinations of the above, to the point the ‘original’ music is almost unrecognizable (and sometimes the original musicians are only obliquely credited or not credited at all). At what point does “inspired by” end off and “ripped off from” begin?

As a music lover, I’ll leave that to the lawyers, since I think the new digital technology that has made all this possible is amazing, perhaps even transformative — arguably the most important advance in music since the synthesizer and the electric guitar.

This is playing out in different ways in different cultures and genres of music, but one of the areas in which I think it’s advanced the furthest is in a genre that I adore: Haitian Kompa music, which purportedly grew out of 19th century Merengue music and which has striking rhythmic similarities to music all over the world, from Zouk (throughout the francophone Antilles and French and Portuguese speaking countries in Africa, notably Cabo Verde and Angola), to Soukous (in much of Central Africa), and Lambada (in Brasil) — lots of musical cross-pollination happening everywhere these days. Dance styles that have evolved with this genre are variously known as Gouyad (Haiti), Kizomba (in Portuguese-speaking Africa), and Brasilian Zouk. The names for the music and for the dance moves are often used interchangeably, so the instrumental parts of Haitian music (sometimes called the hook or the groove) are often referred to as both the Kompa and the Gouyad.

Similarly to the way many musical styles have evolved throughout these countries, Kompa often features a sung section, often a lyrical ballad, followed by an instrumental, allowing the musicians to strut their stuff. When there’s a large band (ten or more musicians is not an unheard-of size), or where new technology allows a smaller band to play over prerecorded material, the compositions can get surprisingly complex, both rhythmically and in terms of bass lines, counterpoint, harmonies and riffs. That’s probably why I find it so interesting, though I confess I was hooked on Kompa/Zouk music ten years ago when I first discovered Cabo-Zouk (sometimes sung in the lovely Senegalese Wolof language) and Ghetto Zouk, which puts its sister genre Rap to shame.

Over the last decade the genre has just exploded, and longer instrumental riffs have opened the door for remixes that often start with just an abbreviated part of the original song just before the instrumental begins, and then layer on additional parts, on top of, and extending after, the instrumental part. Some of the best Kompa remixers will craft loops based on the main instrumental parts of the song (rhythm, base line, melody and harmony instruments) and then add their own improvisations on top, sometimes in the spur of the moment. It would seem remixers generate most of their audiences from live performances rather than studio recordings, though Soundcloud has lots of examples of both.

So, to give you a taste: One of the most accomplished (IMO) contemporary Haitian Kompa groups is Harmonik, and their songs feature rich instrumental backing riffs and extended, brilliant instrumental sections. They’ve had many international hits, and one of them three years ago was called “Cheri Benyen’m” (which might be loosely translated from the Haitian Creole as Baby, Bathe Me in Your Love). Here’s the official video; it’s a nice, innocuous 3:45 love song with characteristic Kompa rhythm and some clever instrumental grooves.

Now see what happens when a duo of classically-trained French Canadian musicians, Jude Sévère (formerly of the Kompa band Zenglen) and Eiffely Bruno, collectively known as Freakeyz, go to work on this Harmonik groove. Check out this live studio session (the link should take you to the 45:40 mark where their remix of the song begins) and you’ll hear, first, a verse sung by Harmonik, with Freakeyz playing around over top, and then, as the Harmonik instrumental part starts at 47:50, Freakeyz lay on their loops of the instrumental parts, and start to jam, live, over top.

And they go on for another 26 minutes! It’s fun and engaging to watch to the end if you want to see very competent, slightly intoxicated improvisers show their stuff. But if you want to see what happens when they really get into the groove, skip forward to here (1:07:50) where they “decide to try something different” on the fly (including swapping instruments), and then, for the final 6 minutes of their remix, they really soar. (Just to show off their talent a bit at the end, at 1:14:00 Jude sings, and Eif plays, a short improvised love song to Jude’s sweetie, and Jude offers a plea to aspiring young musicians to work hard at their craft).

Two other great remixes in the same vein: Gello Keyzz & SonSon do an almost unrecognizable spinoff of the Ella Mai smash Boo’d Up, and also do an inspired build on Milca’s hit Joue Tululute. Meanwhile skilled Parisian remixer AlexCkj combines with Ralph_MMG and CamKeyz to produce his own original Kompa instrumental Gouyad Addict.

There’s a composer living in Calgary who goes by the name Momento Mizik (Mizik is Haitian Creole for Music), who sells his instrumental Kompa compositions to other artists. Here’s his original instrumental Summer Love and here’s a song called Vou è Mizik La arranged and sung by Ngelz using it.

Another remixer, Florida’s Bensky, is also now writing and producing his own songs, ‘featuring’ known Kompa recording artists. And in them, mixing Kompa with Reggae rhythms!

In all these works, you’ll recognize the same infectious Kompa rhythm (though often blended with other rhythms) with its relatively slow 76-86 bpm pace (Soca music by comparison is usually 100-115 bpm, and club music usually ranges from 120-160 bpm).

I think there’s something magic happening here. Listen to the music of hard-working composers in small, often-impoverished countries with rich musical traditions (Haiti’s Zouk/Kompa, Trinidad’s Soca, Georgia’s folk music). Find what is so universally compelling in each, and amplify it. Trinidad’s Soca music is the basis for the astonishing arrangements and performances of the international Panorama Steel Pan competitions. Georgian film music steeped in the country’s folk traditions is re-crafted into amazing jazz compositions.

And now multi-instrumentalists from all over the world, using music technologies that hardly existed two decades ago, are taking the intoxicating rhythms of one of the poorest countries in the world, that have already influenced and been influenced by the musical traditions of so many other countries, and crafting them into stunning, improvisational compositions that rank, in my opinion, with some of the best new music in the world.

This is the stuff of genius.

Who knows what other discoveries, influences, amplifications, mixes and remixes are waiting to transform the moribund and over-commercialized, over-commoditized world of music (popular and “classical”), take it back from the hacks, the mediocre, bland and derivative writers, and the overpaid “stars”, and fill it, once again, with wonder.