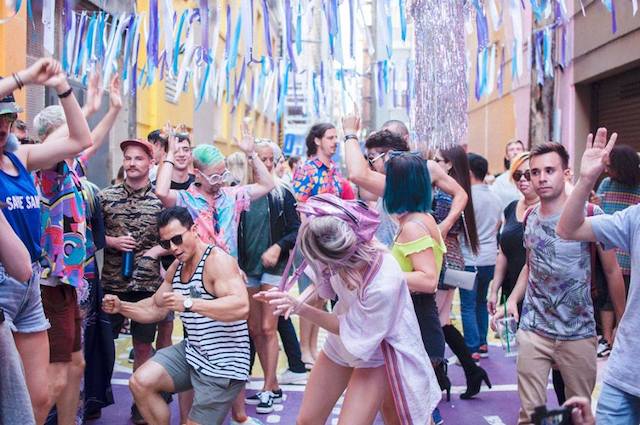 This past week was Pride Week in Vancouver. It’s a great parade and festival, and a celebration of the growing and hard-fought freedom of non-straight (LGBTQ+) folks to be open and unafraid about their sexual/romantic preferences, 50 years after Canada finally began to decriminalize them. It’s great that this has been happening here (sadly, it’s not the case in many other countries) and it’s wonderful that there are now resources to help those who have faced oppression based on sexual orientation to achieve acceptance instead of opprobrium from others, especially their families, friends, communities, and legal authorities. Their fight is, of course, still far from over.

And hurray for the end of third person singular gendered pronouns, that the LGBTQ+ community has been largely instrumental in achieving! Even Oxford now accepts the “singular ‘they'”. Ridiculous that we should have to know a person’s gender before we can properly refer to them in speech or writing.

One of the things they have accomplished is to begin to raise awareness of the dangers of labelling people — which inevitably means inclusion for some and exclusion for the rest. Paradoxically, perhaps, LGBTQ+ people have done this by embracing the labels themselves, and disarming the stigma of them by celebrating them and showing the fear some have of them to be utterly unwarranted.

For those in other groups, the challenge of overcoming personal and collective stigma continues to be enormous. While those coping with physical disabilities are getting more amenities to help them in their homes and communities, the much higher cost of accommodating their “differences” can tax budgets and cause some resentments, and prevent a lot of worthwhile changes that could make their lives better from happening at all.

For those dealing with, for example, addictions, chronic poverty, mental illness and chronic disease, the attitude of most communities has not noticeably improved at all: the stigma remains fierce, programs to support sufferers remain absurdly underfunded, and an enormous amount of misplaced blame, self-blame and denial often makes the situation even worse. These are long-term, intractable problems that generations of effort have largely failed to alleviate.

Part of the challenge for those oppressed by, and those trying to deal with, these problems, are the labels themselves. Few like the label of “disabled”, and even fewer ever want to be called “an addict”, “poor”, “mentally ill”, or “chronically ill”. The labels make their situation sound hopeless, and carry the suggestion that their inability to overcome them is due at least in part to some personal weakness or character flaw (of course, that used to be said, by some, of homosexuality as well).

Lakoff’s arguments notwithstanding, trying to relabel a condition in order to achieve more respect and action for its sufferers is a tricky business. While it is fairer and more respectful to use the term “person with a disability” it is a mouthful, more likely to be inappropriately abbreviated than not.

Some programs for people suffering from addictions actually encourage enrolees to self-label (“My name is X and I am an addict”) and self-blame as a means of accepting primary responsibility for their illness is offered as a means of “curing” them, which is an egregious throwback to old religious dogma, and which, not surprisingly, usually fails. There is, partly as a result of a rush to blame the victim, still a stigma associated even with terms like “diabetic” (the implication is that someone with this label probably doesn’t eat properly). Meanwhile, a person suffering from mental illness, chronic physical illness, or addiction may live in constant terror of being “outed” to their employer or insurer, adding to the anxieties and shame they are trying to cope with.

It does no harm to change to a fairer and less blame-y label — though such labels can be hard to come up with and often don’t “stick” well. “Person with an addiction” or “person suffering from (chronic disease)” are better, but they’re still clunky and conjure up suffering and misery, which most people don’t want to think about. And they conjure up the realization that the only way (unlike the freedom of expression of sexual orientation) the sufferer will ever move from being stigmatized to celebrated is if they are “cured”. I suspect most of those suffering from addiction, poverty, mental illness or chronic disease do not expect a cure in their lifetime.

So if one can’t ameliorate and shift the discussion and responsibility for these social crises by relabeling them more fairly, what might work better?

Two things, I think. First, one can recognize, challenge, and work to undermine, the perceived legitimacy of all labels of collective identity as the abstract, generalizing, oversimplified fictions they are (however convenient and galvanizing they may be in the moment). At their worst (as in “make our country great again”; “those people should go back to where they came from”; “some of my best friends are group x”) they are divisive, code words that reflect and promote hatred, violence, war, theft, abuse, genocide, discrimination and segregation.

Even at their best (“what we all need to do to solve this problem is…”) they are throw-away excuses for inaction, or wishful thinking that denies the reality of how change actually happens.

Pausing before every use of a collective pronoun or label provides an opportunity to stop and fiercely challenge the validity of our assumptions, judgements, beliefs and perceptions about who “we” are, and are not — about who our labels actually refer to, and who they include, and exclude.

Acting on this can be as simple as removing the labels on public washrooms and remodelling them to allow the privacy of each user. Or it can be as exhausting as highlighting all the collective nouns in news stories and contemplating the judgements, myths and hatreds they imply and perpetuate.

Thinking about the generalizations implicit in every collective label and plural pronoun, not only as they arise in one’s own thoughts and communications, but in all our personal encounters and our consumption of media, can be enlightening. Even if one can’t stop using them (it’s probably impossible to do so), one can be aware of just how enormously the generalizations inherent in our language enable, and even encourage, judgement, discrimination, anger, polarization, fear, shame, and finally violence and oppression.

The next headline you read about the “opioid overdose crisis among street addicts” may strike you somewhat differently if you do so.

Secondly, one can fight to eliminate inequality of power, of every kind, by calling it out as the unnatural and destructive force that it is, and then making it a source of embarrassment to those who don’t cede it voluntarily (and it mostly won’t be ceded voluntarily). That means working to strip the respectability and prestige of being ultra-rich, and working to end the outrage of corporate “personhood”). It means fighting to restore historical, high rates of taxation on very high incomes (90% is not too high, and it does not discourage the rich from working), and to reinstate and expand wealth taxes (especially inheritance taxes). And it means treating wealthy tax cheats as criminals, not as clever entrepreneurs.

It means fighting to end classism of all kinds, right down to “business class” travel, and pointing out to those who exploit the benefits of their class gleefully or ignorantly that it always comes at the cost of deprivation to everyone else. Do “business class only” and “for our customers’ use only” toilets remind you of anything from earlier in human history?

It means refusing to acknowledge and respect the “rights” and privileges that come specifically from power (which means just about all “rights”, and most privileges). It means recognizing the self-identified “philanthropist” for what that person is — someone who has stolen wealth from everyone else (or whose parents have stolen it and passed it down) and who now wants fawning recognition, fame and celebration for returning its dividends to the powerless — who otherwise have to use “you fund me” campaigns, the latest form of public begging, to pay for their vitally-needed surgery.

Inequality of power and wealth of every kind is obscene and monstrously destructive, and every act legitimizing it (including almost every financial transaction) enables it to continue.

Battling the inequality of power and wealth is probably even more difficult than challenging the labels we use in our thoughts and communications. It’s hard, if you’ve grown up in our culture, not to esteem those who have wealth and power, not to assume it’s deserved, not to be envious of it. And in our culture, inaction inevitably leads to more and more inequality — with all its commensurate costs.

As with our collective labels, one can start by being aware — of power and wealth inequality, and the misery its continuance inflicts on the powerless. Of power abuse and the inappropriate adulation of the rich and powerful. Of the understandable rage those without power feel every time it is exercised indifferently and unconsciously by those who have it.

Collective discrimination, segregation and hate-mongering could not, I believe, survive the realization of the inherent illegitimacy of collective labels and of inequality of power and wealth. Sadly, that realization will likely not come before this ghastly industrial culture collapses under the weight of its ruinous economic and ecological practices, and in so doing makes labels and inequality the dreadful stuff of history. I’d like to think that, starting over, our human successors will avoid making the same mistakes.

3 Responses to What Underlies Oppression