Inequality and the Death of the Arts 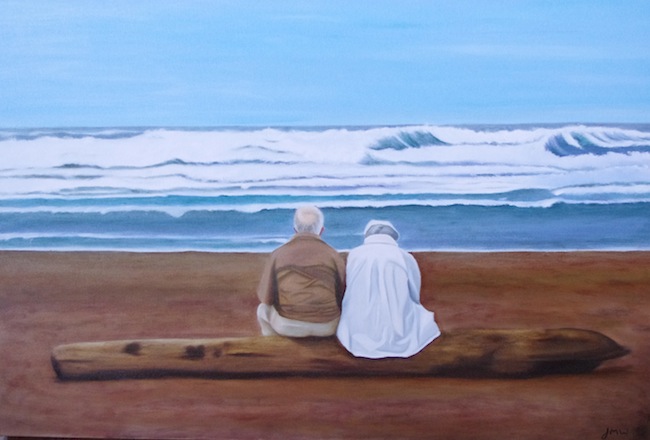 painting by Bowen Island artist Jeanette Wrenshall, from my own collection

My island community is full of artists — one of the largest proportions in the country. They came here, mostly, for sanctuary. It’s an incredibly beautiful and relatively undeveloped place, yet still a short ferry ride from a progressive city. Many came here to avoid personal abuse, unhealthy relationships, unbearable stress, and/or financial hardship (home prices here were, until recently, much less expensive than in the city). But for the last two decades, prices even here are way too high for a modest or single income earner, and because we are an island almost everything has to be trucked here, so foods and materials are even more expensive than in the city.

And even before CoVid-19, things for artists were tough here. Home prices have actually soared during the pandemic. Excluding wealthy retirees and executive commuters, who buy relatively little on the island (there’s more selection and lower prices in Vancouver), the turnover rate here is high, and it’s almost always involuntary. Many of my friends here cried when they left. Housing is unaffordable for those trying to live and work here, and there is little rental housing or subsidized housing.

We are, both in the grim situation of our artists and in the prevailing economic trends, a microcosm of what is happening in the rest of the world. Specifically, we’re seeing the rapid death of what remains of the middle class, as salaries and investment income for the dominant caste (ie university-educated white males) soar, while for everyone else they stagnate or decline. Paradoxically, this means that because the dominant caste are the only ones who can afford to buy land, homes and investments, that caste’s obscenely excessive wealth is driving up the price of these commodities, making them even more unaffordable for everyone else. Only a small minority can afford to live in the city; the rest have to drive from farther and farther away each day to find work. And in many cases they now need, and have, two or three jobs each to pay their rent and grocery bills.

So they’re working themselves to an early grave in constantly precarious, stress-filled lives, and the government, which chooses to see what reflects well on them, says that unemployment is down, the stock market is up, and real estate is booming — so the economy must be great!

Of course, it is nothing of the sort. Real unemployment, including those who have given up trying to find reasonable-paying jobs, or are so physically and psychologically stressed by their situation they cannot keep them, is soaring. Real inflation, not the fake numbers that count Big Macs as food but not healthy produce, is in the double digits, especially for the multitudes whose health care needs are increasing due to the epidemic of chronic diseases (mostly ascribable to a combination of poor nutrition, ignorance, insufficient time to prepare healthy meals, and endless stress).

As I’ve written elsewhere, the government is buying time by deliberately suppressing interest rates far below inflation levels, and encouraging the non-privileged castes to get deeper and deeper into debt to feed their families. This is of course completely unsustainable.

The soaring inequality of wealth (and political power) hits the artist several ways. First, they have no power to elect representatives who will look out for their interests; the laws are increasingly written to favour the dominant caste that politicians mostly belong to and (because they rely on their campaign donations) listen to. Secondly, with their living costs soaring, they need more and more income just to tread water. Meanwhile their income is dropping — their customers are mostly middle class citizens who are struggling as much as they are and reducing their “discretionary” spending.

Even worse, the gross inequality of incomes is now reflected, thanks to big tech firms and arts “intermediaries”, in the pay scales for artists, too. The dominant caste bids up the price of limited “collectors'” art to the millions of dollars, as it’s a good investment for them. The music, publishing and film “industries” reward the 1% of elite performers with over 80% of the total artists’ fees, leaving almost nothing for the rest. This makes sense to them because their incremental cost of one more movie ticket, one more streaming music play, and one more e-book, is essentially zero. So the 1% of top-billing artists can be given most of the revenue that all artists collectively earn, and profits of agents and publishers soar. They can argue that every book, song and ticket costs the same, so this is “fair”, but it’s absolutely devastating to all but the 1% top-earning artists, who end up obscenely overpaid (like the top 1% in every other sector of the economy), while everyone else receives a pittance, and has to wait tables (CoVid-19 permitting) for a living.

So now artists are reduced to begging on Patreon, Kickstarter and YouFundMe sites to continue their work. Their donors are not philanthropists, but rather others, formerly in the disappeared middle class, themselves struggling to make ends meet.

Hua Hsu, in a recent New Yorker article on how we might provide artists with a reasonable income, points out that part of the problem is the middlemen — the agents, publishers, lawyers, ISPs, tech platform operators and other parasites who take a hugely-outsized cut of the “arts dollar” for doing almost nothing. We are starting to see co-operatives striving to replace them and their grossly unfair business models, but that will be only the start. As William Deresiewicz says in his book on the subject, The Death of the Artist, these middlemen often promise struggling artists “exposure”, but for an artist, “exposure is a synonym for nothing”. William goes on:

Hua’s review criticizes the naive and muddle-headed talk of a new “creative class” championed by hack evangelists like Richard Florida, pointing out that the imagined idea of this supposedly wealthy and successful class merely provided cover for rich, greedy real estate developers promoting “gentrification”, and a bullet-proof haven for dubious “arts” investments by “philanthropists”.

Much research has shown that there’s a near-perfect correlation between inequality in any geographic area and violence in that area. Those who have fallen out of the middle class as it’s disappeared (since 1980, 100% —  the entire increase in wealth and income — has gone to the dominant caste). For the rest of us, real wealth and income have fallen steadily since then as the economy is offshored, outsourced and consolidated to our detriment. And that’s true even using the government’s fake understated inflation rates.

If the problem is inequality, what can be done about it? The answer, of course, is interventions in the market, which the conservatives and dominant caste in power want no part of. Or at least they won’t until they realize they can’t sustain their wealth through sales to each other, and through massively increased debts at artificially suppressed interest rates (though for those in the Two Income Trap, those “low” interest rates don’t accrue to them either). You can’t borrow your way to financial health, at least not sustainably. And even the dominant caste needs to be able to sell something to the rest of us, which means they need to ensure we can afford to buy it.

So the obvious answers: a guaranteed annual income, massive debt forgiveness, free education and health care and other essentials, a radically graduated tax system that taxes all forms of income, a wealth tax to catch unrealized income, and end to tax shelters at home and offshore. Nothing new about this; it’s affordable, and it would not be hard to institute, if there were the collective will to do it (including dumping the politicians vigorously blocking all such measures).

My sense is that it will take a political upheaval to achieve it, and that such an upheaval is inevitable, even if it’s stalled off for a while by totalitarian right-wing governments with a very different agenda. Then, and only then, will we see a rebirth of the arts, and the realization of the promise that technologies can empower, rather than starve, our artists.

1 Response to Inequality and the Death of the Arts