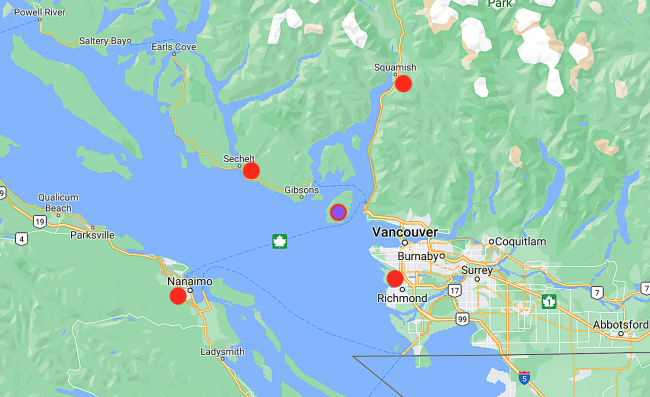 I‘ve had a personal weather station for about four years. Living on a small island with microclimates, where the weather doesn’t quite match that of any of the nearby places served by Environment Canada (shown as red dots above), I wanted to be able to more accurately predict the local weather before heading out. I’ve learned a lot.

I started by tracking historical average temperatures for the four nearby Environment Canada stations, back as far as the records went. I had to adjust for the fact some of the stations were moved from time to time. More significantly, I realized that most weather records use the median of the high and low temperatures for the day as the ‘average’. But in some places that’s quite different from the hourly average temperature for the day. In Squamish, for example, overnight temps are flat while daytime highs briefly spike, so average hourly temperature (over time) is nearly 0.5ºC lower than the median. In Nanaimo highs tend to be flatter than overnight lows, so its average hourly temperature is nearly 1.0ºC higher than the median. In fact, using the hourly instead of median data, it turns out Nanaimo is (by a tiny bit) the hottest ‘average’ place in Canada!

What I then did is to compute daily average curves (temperatures, rainfall, wind) for the four stations. I superimposed my four years of Quarry Park data (my area of Nexwlélexwm/Bowen Island, on the side of a hill inland and 300m above sea level on the southwest side, shown by the purple dot above) on this data and ran a regression analysis. That allowed me to backwards-estimate 1991-2016 data for my station, to give me a rough estimate of the 30-year trend (click for a larger version to see details):

For all stations, it seems 2015-16 was the warmest year on record (even looking at Vancouver data that goes back to 1937, nearly a century). As you can see:

Historically, the coldest month in our area has been December, with January only slightly warmer. But in each of the last 3 years (and also forecast for 2021) February has been the coldest month. It’s not clear if this is a short-term or long-term trend.

Precipitation-wise, our island, like West Vancouver, averages about 2,000mm of rain per year, a little less than Squamish and twice as much as Vancouver, Nanaimo or Sechelt. 60% of that falls in the rainy season (Oct-Jan), and only 10% in the dry season (May-Aug). With all that precipitation, snowfall is hugely variable here, with none at all some years (notably the Olympics 2009-10 winter), and a Squamish-level 200cm during the terrible 2016-17 winter (Vancouver had 70cm that winter), with snow on the ground here that winter lasting 76 days.  “Average” snowfall is probably about 50cm (average of 20 days with snow on the ground, compared to 15 days in West Vancouver and only 3 days for Vancouver). The island’s shorefront homes, moderated by the sea and at a lower altitude, probably get only half the snow that we get here up on the hill.

The wind here is a lot like the precipitation — wildly variable and occasionally wild. Whereas Squamish, Sechelt and Nanaimo all have low wind patterns (average wind speed <10km/h), Vancouver averages 14km/h, the Gulf Islands (and our overall) average 17km/h  (and average 24km/h in the Nov-Mar windy season), and my guess is that here on the hill the average is somewhat higher than that. But the average is not what counts. We’re an island in the Salish Sea, which has a very rapid and turbulent wind regime, and extreme winds in excess of 80km/h are quite common here. Mount Collins on our Island has one of the best (highest average) on-land wind regimes in the country. I haven’t tracked the number, but I’d be surprised if the frequency of 70km/h+ wind warnings here was less than 30 per year. Downed trees and power outages here are routine, and ferry cancellations becoming more so.

So: It’s winter here. It reached a balmy 7ºC yesterday; it’s now fallen to 4ºC and will drop another couple of degrees overnight. Expect the normal fog to accompany the drop, and then the temp to recover to near 7ºC tomorrow. That’s 2ºC warmer than normal for this time of year. Tomorrow may be the first day since Dec 12th without rain (thanks to the Pineapple Express from Hawai’i and its “atmospheric river” of precipitation). Winds are quiet but don’t be complacent; there’s a gale warning for Átl’ḵa7tsem (Howe Sound).

And, as they say here, if you don’t like the weather, just wait an hour, and it will probably change.