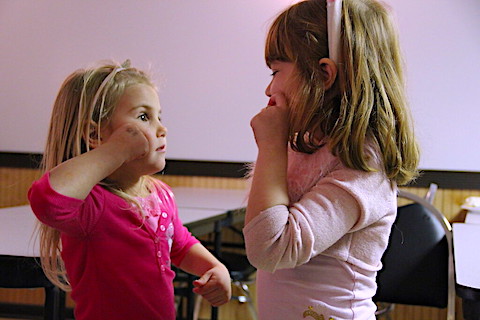 two children of deaf adults (CODAs) teach each other ASL; photo by daveynin on flickr CC-BY-2.0

There’s a reason it’s so much easier for young children to learn things like new languages. They haven’t already “learned” the one best way to do things (like structuring sentences for example). With no preconceptions, they are not prejudging or trying to fit everything into their established worldviews and frames.

If your way of making sense of the world insists that sentences should have a subject, a verb, and an object, in that order, it’s going to be much harder to learn a new language that uses an entirely different order, and perhaps declensions and conjugations that change how a word is said and written depending on its context in the sentence.

We are the product of our conditioning, and that conditioning serves us well — it allows us to make sense of things even when large parts of it are missing. We just fill in the blanks the way our worldview makes best sense of it. It saves us a lot of time and energy, and informs our instincts to make the appropriate reactions, quickly.

So it shouldn’t be surprising that, if we want to learn a completely new way of doing something — speaking a new language, working in a self-managed business, or embarking on a program of self-directed learning, for example — it’s going to be hard.

Unlike the novice, to do these things you’re first going to have to recognize, or set aside, your existing conditioning about how these things are done (putting the words in a certain order in the sentence, following the hierarchical processes in a business, and doing what the teacher says is next to do). And then you have to unlearn those processes to clear the slate to learn this new way of doing things. Without that you’re going to be fighting every step of the way:

“This isn’t how I was told to do it. I can’t see how it could ever work. It doesn’t make any sense.”

“Please lay it out for me in a way that fits with my current understanding and way of doing things. Surely these declensions and conjugations are unnecessary and can be dispensed with, no? Surely some degree of hierarchy is necessary even in a self-managed organization, no? Who do I talk to about that? What is the structure and steps involved in a self-directed learning program?”

There are terms for the “unlearning” process — deprogramming, detoxing etc. But we’re not machines whose old programs can simply be erased. The neural pathways in our brains physically co-develop with our early childhood learning, and they’re not nearly as plastic as we might think. If we haven’t learned any abstract language by the time of puberty, for example, linguists tell us we are then unable to ever learn such a language. Our brains and their connections have been put to other, non-linguistic uses, and we’re set for life. That’s how deep our conditioning runs. Try to learn a second language, and every fibre of your brain is trying to learn it relative to your first language, by “translating” word for word. It’s a hopeless way of learning a new language, but, in a sense, it’s the only way we know.

So I think words like “unlearning” and “deconditioning” are better terms to describe the agonizing process of trying to do things a new and utterly unfamiliar way to the way you’ve always done it.

But how, when “the old way” is the only way we know to do these things, do we decondition ourselves from, and unlearn, the old way, so we can learn the new one?

Here are a few ideas:

I’m sure there are other techniques that also help you decondition and recondition yourself and your colleagues to learn something important and radically new. It’s principally a matter of getting out of your own way. But it’s damned hard, so don’t be embarrassed if learning something that is seemingly child’s play to a child, seems akin to moving a boulder with your breath to the older, conditioned you. And don’t expect your fellow learners and work colleagues to find it any easier. You’re going to have to help each other unlearn, and then help each other learn. Just watch the kids and the wild animals. You can do it.

Thanks to Tree Bressen for the very useful discussion on this article, and to the Eugene Teal group for prompting it.