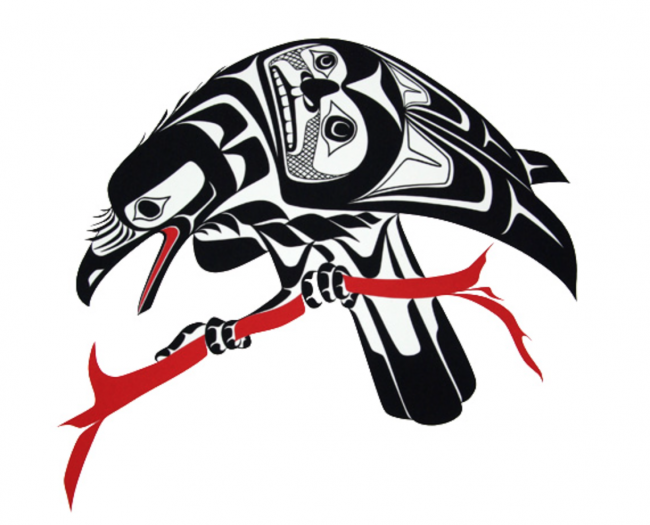 image of a raven by Hornby Island artist Glen Rabena

A year ago the Tyee ran a column suggesting that the ghastly name of our province — British Columbia, with the double blemish of (a) smacking of brutal colonialism and (b) association with a genocidal Italian explorer — be scrapped.

At the time, I suggested the name Klahanie, a Chinook term meaning “the Wild Land”, or simply “the outdoors”. My suggestion was one of the most upvoted responses to the column.

Chinook is not an indigenous language, but rather an amalgam and convergence of many local indigenous languages adopted by First Nations in the area as a means to communicate more conveniently with European occupiers and traders. Using a Chinook word is, I suppose, a sneaky way of not showing favouritism to any one of the occupied territory’s many and diverse First Nations.

Now the CBC has taken up the call, with its interviewees suggesting names such as the Chinook Illaheechuk (“where land meets water”) and the Hul’qumi’num language S’ólh Téméxw (“our land”, pronounced soul tow-mock).

The province, as it is currently constituted, makes little sense as a geographic area. Half its population lives in multicultural Metro Vancouver, and another 10% in Metro Victoria. The province includes roughly half of the Rocky Mountains, vast expanses of forest (almost none of it old growth, and most of it severely stressed), and an agricultural centre in the south central part of the province (the Okanagan Valley, including the province’s third largest city, Kelowna). As in most colonized areas, the two big cities (and the coastal communities) mostly support progressive politics, while the rural areas mostly support conservative politics, with those in the largely-remote forested areas vacillating between the two, depending on which party seems most supportive of resource-intensive development.

My preference for the name Klahanie stems from a number of studies of the province’s current culture, which is mostly energetic and nature-loving, despite its demographic skewing older. The city of Nanaimo (the province’s fourth largest city, once predominantly a forest products town, on Vancouver Island) went so far as to define itself by saying simply “Our culture is outdoors“.

So a name for the area that means “outdoors” seems to me most appropriate, as it is a passion that I think most people living in the territory share.

A new name would of course require a new flag to replace the current monstrosity. Given the astonishing artistic skill exemplified by the province’s First Nations, it would make sense that it be designed by them. I’m kind of partial to Glen Rabena’s raven, depicted above, and would prefer it to be a single image rather than some horrible pastiche of different elements.

Given some of the historical genocidal atrocities recently revealed in the province, some may say that a renaming is just a meaningless symbolic gesture which doesn’t come to grips with our brutal colonial past or the ongoing plight of so many of the victims’ descendants. But symbolic or not, I think it’s called for. Not enough by any means to atone for what we have wrought, on this land and its peoples. But a step in the right direction, and perhaps the start of a new trajectory.