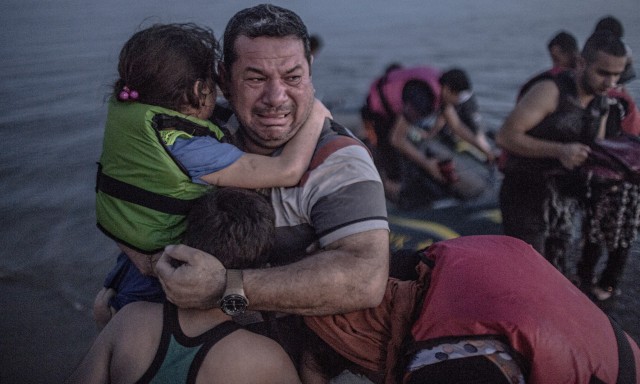 you have to understand,
that no one puts their children in a boat
unless the water is safer than the land
no one burns their palms
under trains
beneath carriages
no one spends days and nights in the stomach of a truck
feeding on newspaper, unless the miles travelled
mean something more than a journey.

— from “Home”, by Warsan Shire

Sometimes we forget that humans are capable of incredible acts of courage, open-mindedness and generosity. Those capacities are going to be sorely needed over the coming decades as as many as two billion refugees — mostly fleeing utterly uninhabitable climates and irreparable storm and disaster zones, as climate collapse gains steam — come knocking on the doors of their neighbours.

Even as that is happening, we are likely to see huge waves of refugees from global economic collapse as well, as our absurdly overpriced stock, commodity and real estate markets wake up to our unsustainable way of living and lose most of their illusory value, with the resultant loss of hundreds of millions of jobs, the collapse of global trade, financial institutions, currencies, governments, resource and energy development activities, the whole house of cards, making many necessities of life suddenly unaffordable for most of the planet’s people, while eliminating essential public services that many others, already on life support, depend upon.

There will of course be strong initial resistance to welcoming such an onslaught of refugees. The onslaught and the resistance are already playing out across the world and across the political spectrum. We are understandably terrified that our already crumbling systems will not be able to bear the weight of so many more in such enormous need. That they won’t, for much longer, even support us.

But at some point, hopefully sooner rather than later for most of us, it will dawn on us: This is not an issue of us versus them. We are all in this together. The borders cannot and will not hold. If we are not already among the refugees, there is a significant chance we will be soon. And those already on that journey, perhaps a lifelong, multi-leg journey for many, can actually show us how to cope better when our own journey to find sanctuary from collapse begins.

Many refugees have learned, of necessity, skills that many of us in complacent, dependent, affluent parts of the world have forgotten: How to grow food and make nutritious meals, how to make and fix clothes, tools and vehicles, how to get along with strangers and build some modicum of community wherever they are. We will all have to relearn these things, and refugees may show us how.

There is not much information available on how to accommodate huge numbers of refugees, though it’s not a uniquely modern problem. The nations that currently harbour the largest numbers of refugees (especially as a % of their domestic population) are mostly adjacent to the countries that millions are desperate to escape: Syrians in Turkey, Venezuelans in Colombia, Afghanis in Pakistan, Congolese and Sudanese in Uganda. And more than half of the world’s displaced people are ‘internally’ displaced: They have been forced from their homes, but live in camps and other ‘temporary’ settlements within their homelands.

Five years ago, UNESCO did a major study on how to deal with this problem, noting that most refugees end up living in major cities in their adopted countries. The four pillars of their recommendations are about (1) universal human rights for refugees, (2) equitable treatment and freedom from discrimination, (3) equitable labour standards and employment opportunities, and (4) rights of asylum and due process.

Welcoming and including refugees is fraught with dangers. There is the whole philosophical and ideological issue of ‘integration’ — to what extent refugees are expected to quickly adopt the language, customs and behaviours of ‘natives’, versus their right to continue to exercise, protect and celebrate their own cultures. Often more work has to be done with the native population, to deal with their unease, suspicions and fears, than with the refugees themselves.

There is a propensity for studies and public programs on issues such as refugee accommodation to rely on what are called “best practices” — identifying and ‘replicating’ things that seem to have worked in other jurisdictions — notwithstanding that refugees’ situations are largely unique and “best practices” have repeatedly been shown to simply not work. Every situation is quite different, and there is a basic human tendency to distrust “not invented here” solutions and to reinvent the wheel again and again.

My sense is that the success or failure of our capacity to welcome, live and work with large-scale refugee migrations will depend little on government programs and other top-down solutions (which will, as collapse worsens, become more and more preoccupied with dealing with domestic crises, and will likely disappear as economic collapse bankrupts governments), and will instead be a function of two things:

The staggering, unprecedented, large scale mass movement of humans to safer harbours that is now underway is, in short, not going to be solved by government, by plans, by research studies, or by deploying “best practices”. It is instructive to note that all of these classic, largely worthless crisis management techniques were in place when the global pandemic hit. We had agencies, management plans, contingency plans, cascading rollout plans, scenario plans, and gazillions of preparedness reports, and if anything they were mostly worse than useless, since they gave us a false sense of readiness for the pandemic.

Instead, we improvised, taking our lead not from the ‘leaders’ but from the data, knowledge, ideas, insights and experiments of those on the front lines, those who knew exactly what we were dealing with not from reading textbooks and management theories but from first-hand, just-in-time experience. The best wisdom was passed laterally, peer-to-peer, not “cascaded down” from the top. Much of that improvisation worked despite unprecedented amounts of misinformation and fear-mongering propagated by terrified, mentally ill people, largely through the auspices of the hapless, execrable “social media”.

The migration of two billion refugees over the next few decades will be the largest improvisation project in human history. To avoid a million small disasters, we will have to rely on maximizing the face-to-face communication between ‘them’ and ‘us’ — the personal anecdotes, the stories, the shared struggles, the fears, the needs, the skills and capacities, the passions, and most of all the commonalities.

If we are separated by camps, by gated communities, by walls, by systemic discriminatory mechanisms, by language, by cultural misunderstandings, by rhetoric-spouting ideologues, by propaganda, and by xenophobia, there is no hope for us.

But if we look each new immigrant in the face, and share and hear and tell their stories and ours, and welcome them as people whose only real difference from us is their misfortune at where they happened to be when TSHTF, then we will get through this, perhaps the greatest human adventure of all time. We will, one way or another, share that adventure, learn from each other, help each other and make it, or not, together.

Things are about to get very interesting. It’s OK to be afraid. You’re not alone. We are all leaving. Those people there, refugees like you, they can show you, show us all, the way.