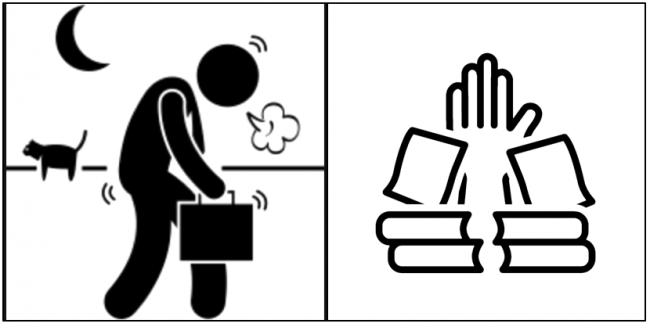 It took me my entire working life to realize how unnatural “work” — ie wage slavery, in a relationship of voluntary servitude to others — actually is. Even as a youth it seemed wrong to me. But when everyone around you is fighting their way to the top of fickle, hierarchical, brutally competitive organizations, you come to think of this as just the price of living in a modern, “affluent” society.

The exhausting 70-hour weeks, the lack of respect and appreciation, the intermittent or constant humiliations, harassment and mistreatment, the mind-numbing toil of doing what you’re paid to do instead of what you want to do, what you know you’re meant to do, the grinding, long commutes, the constant anxiety and sense of hopelessness of ever getting “out from under” — these can all come to seem “normal”.

But as I wrote last year, not only is our modern idea of work not normal, it’s not even necessary to a very comfortable way of living:

The vast majority of us today spend roughly half our waking hours directly or indirectly engaged in “work”, and before that being “schooled” for “work”, from very early childhood until death, or, for a lucky few, until we are deemed unsuitable to continue working and are “retired” from the work “force” and labour “force” (one of many “work”-related terms borrowed from the military).

It is perhaps surprising then, this invention of voluntary servitude called “work” being so new and yet so preoccupying our lives, that relatively few of us even ponder the purpose of “work”, and most just assume this exhausting and life-defining labour is essential to society’s functioning.

It’s a false assumption. Even with our unsustainable human numbers, the availability of billions of barrels of oil, each barrel capable of producing the equivalent of 4.5 person-years of labour, is more than enough, if it were not spent on wars and extravagances, and if it were even close to equitably distributed, to allow everyone who didn’t want to work to live a life of comfortable leisure.

There seems to be a growing awareness of the unnaturalness and unfairness of the “work world”. Some attribute this to the unemployment and other benefits given to those displaced from work by CoVid-19, and a reluctance to return to the grind when those benefits ran out. But I think our realization that work is an abomination has been growing for a long time, and it’s gaining steam with our realization that unfettered capitalism is dysfunctional and killing our planet. The stock market averages, and the GDP figures, are indices of the velocity of civilization’s collapse, not of anything even remotely connected with well-being.

Katherine Berry created a small sensation three months ago with her passionate (if a bit naive) vlog post “I no longer aspire to have a career“. In China there’s now a “Lying Flat Movement” protesting the requirement to work and to “progress” in the work world. We have come to understand that there is no such thing as “sustainable growth” and that most of the world is engaged in meaningless and unnecessary Bullshit Jobs. And last week NPR producer Cassady Rosenblum explained why she quit her job and gave up a promising career “to sit on the porch”.

Of course these posts and protests have prompted endless howls of criticism, from right-wingers calling them “lazy” and “spoiled and privileged”, to the Chinese government calling them subversive. The common supposition is that unless the treadmill of work is kept mandatory to avoid starvation and suffering, the whole economy will collapse, and that since no one would work if they weren’t forced to, we have to force everyone to work. I won’t waste any words trying to explain how ludicrous these suppositions are.

The interesting questions to me are (1) will this be the basis of the protest movement for millennials, perhaps one that will compare to the anti-war, anti-consumption protest movement of the boomers in the late 1960s (remember John Lennon’s “bed-in” for peace)?, and (2) if there is such a movement, can it possibly succeed where the 60s protests failed?

Millennials now outnumber boomers, and will continue to do so for many years. That means their impact and influence will grow.

But it is not at all clear to me that the capitalism machine depends on people showing up for work. Given the overwhelming number of Bullshit Jobs, it would hardly change anything if these jobs were eliminated and replaced with a guaranteed minimum annual income that everyone would get. The same thing would happen as happens now — an ever-increasing amount of money would flow to potential consumers, enabling them to buy goods from the corporate oligopolies that control supply, so “growth” would continue, with more and more production, consumption, resource use, pollution, GDP, corporate profits, and market value increases. It’s a self-reinforcing cycle, and I’m not at all convinced it needs many people to work to continue it.

It is of course unsustainable, since we are quickly running out of the cheap resources (petrochemicals especially) that have powered all of the growth in production and GDP over the past two centuries, and destroying the planet in the process to the point that much or most if it will soon be uninhabitable.

The combination of economic and ecological collapse will shift us to a subsistence, scavenger economy, and it’s going to be a struggle for almost everyone, but what we will have to do to meet our needs in such an economy will resemble what almost all of us did until just two or three centuries ago — work the land to harvest food, make what we need (mostly clothing and shelter) directly to survive, and entertain ourselves with self-produced arts and cultural activities with the leisure time that’s left. Is that “work”? Certainly not in the modern sense.

But back to the issue of millennials and their potential rebellion against what we now call work. Given their relative powerlessness (shades of the boomers’ feelings in the 1960s), their discomfort with being just another low-ranking cog in the top-heavy machine that is leading to our downfall is certainly understandable. A recent study suggests they are absurdly overburdened with debt, ethical and cautious spenders, quite health- and nutrition-conscious (preferring to work out in groups rather than alone, drinking less beer, and avoiding processed foods), prefer to rent or stream things rather than buying them, and prefer to work on projects rather than fill roles and do fixed jobs.

That sounds sensible to me, but doesn’t suggest a revolution against work is at hand. Perhaps we boomers, realizing far too late that the years at the grindstone weren’t worth the grind, are projecting a bit? Millennials are the first generation in history to have a lower median standard of living than their parents, so far from being rebels they may just be pragmatic in what they spend and hence what they need to earn to be able to do so.

So, I think this recent analysis of millennials is mostly projection and wishful thinking:

Millennials are the first that do not place work ethic on their list of what makes them unique. It’s not that Millennials don’t want to work. It’s that they don’t want to work for “the man”. They wonder why they should slave away and be loyal and obedient to organizations that shows no loyalty to them. They constantly ask “why” and they want feedback because they know they have to keep developing, keep learning, keep moving, keep connecting.

The fact this is mostly wishful thinking is kind of a shame. We may be seeing the end of careers, but not, alas, the end of work. I’d like to see more people walking away from our ruinous economy, as workers, producers, promoters and consumers. But in western nations we’re almost all yoked to the plough of the modern industrial “growth” economy, and we’re all likely to stay there until the cart stops moving. We probably have a decade or two to figure out how to extract ourselves from the yoke, and then ask the question we don’t want to ask: Now what?

4 Responses to No More Careers