Trust in a Collapsing Economy 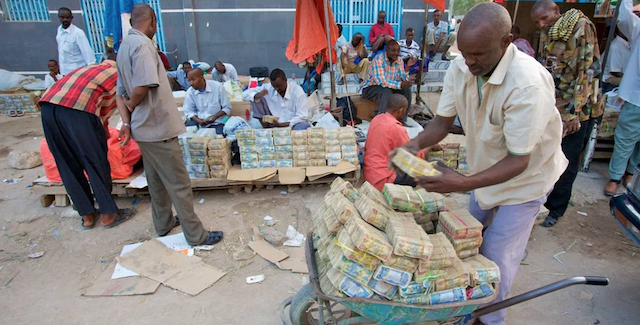 currency exchange in Somaliland, an unrecognized country within Somalia, from the BBC, photographer Simon Reeve

One of the hallmarks of civilizational collapse is the loss of trust. Societies are built on mostly-unwritten agreements, and these agreements require an enormous amount of trust to sustain them.

I remember many years ago attending a business meeting among about a dozen people from several Arabic countries, some of whom had never met before. Over a long lunch and coffee, agreement was achieved on several large new projects, and on who would do what on each project, and what each would expect in return. It was all done orally, based on handshakes and trust. No lawyers were needed. When I told them that my firm would require an engagement letter to spell out the details of what I, and they, had agreed to, I was told simply “Do what you need to do to make it happen”. And with gracious thank you’s, the meeting ended.

Even back then, I was astonished at the level of trust granted and expected at that meeting. Today, in an age when letter-opener vendors have to include a five-page safety warning and disclaimer with their products, including a requirement that “face protection be used at all times” when opening letters, trust seems to have completely evaporated.

As I am so fond of saying at every turn, there is no one to blame for this. Our civilization culture has evolved the only way it could, including in some diabolically unexpected ways:

After a while, we reach the point that we don’t believe what any corporation, politician, marketer, advertiser, salesperson, expert, leader or pundit says, except for the handful who haven’t let us down yet. Who do we trust, then? Close friends, and almost no one else. There is simply no reward in our evolved political or economic systems, or in subsidiary systems like education and health care, for behaving in a completely honest and trustworthy way. The rewards, more and more, are for clever deceit and wilful ignorance.

We can’t lie to, or con, people who we care about — unless we’re really sick, or don’t yet know that what we’re saying or doing is a lie or a con. Eventually the truth will out, and that means it gets harder and harder to trust, and harder and harder to care about anyone outside our increasingly tiny circle of trust. In our ever-more-isolated society, many people now have no one they trust at all, and no one they dare care about too much. When everything that most people believe and say is a lie or a con, or is the result of clever deceit or wilful ignorance, how can there be trust?

It’s not as if we choose not to care about most others. It’s that we can’t care. It’s too costly, too hard, too dangerous, when caring leads to us dropping our guard and suffering as a result, or when it simply hurts too much to witness all the suffering others (human and more-than-human) endure in our harsh modern, collapsing world.

And without trust we cannot have a functioning society. The value of things like real estate or stocks, the capacity for trade, the viability of currencies, the running of healthy organizations and purported democracies — all these things are based on agreements that our culture depends on, and all of them depend in turn on trust.

Many of these things — business and stock valuations, house prices, currency values etc — now operate largely as lotteries, speculations, casinos, and Ponzi schemes. Things are worth what people are willing to pay for them, but when what they’re willing to pay is utterly divorced from the reality of any true value, who do we dare trust in any transaction?

No one believed that 1929, or for that matter 2008, could actually happen — that trust in the value of all financial assets would suddenly and dramatically dry up. The governments of the world almost bankrupted themselves in 2008 bailing out worthless companies to try to restore “trust” to the markets. Next time it’s unlikely to work. There’s not enough slack left in the financial systems to repeat that con.

And we’ve now learned better than to trust any politicians’ promises, but we haven’t a clue how to replace our broken political system, or the clever deceits and wilful ignorance that power it, with anything we could re-learn to trust. Especially when most of us profoundly distrust most of the voters. That system is just going down, and is beyond rescue. What will replace it is anyone’s guess, but it’s likely to be orders of magnitude smaller than what it replaces.

The actual cost of living, and actual unemployment rates, are in most countries many times the “official” rates, which are just bare-faced lies designed to prop up the parties and corporations in power. How could we ever have trusted them? We only trust them now because all the parties hew to the lie of the “official” rates, in case they happen to come into power and have to deal with them.

Talk to people who’ve experienced the collapse of their currency, triple-digit inflation, a complete halt to trade, empty shelves, shortages of everything, and they’ll tell you where we’re headed and, with the benefit of history, what we can expect to happen as a result. Fiat currencies, soon to be as worthless in the street as they are in any real-world accounting, will be replaced with systems of gift, barter and scrip, and transactions will only be with people we know and still trust — and for the most part, care about. Legal contracts and documents (like leases, deeds of ownership, and employment contracts) will be replaced by oral agreements — with people we trust to live up to them. Given this constraint, there will of necessity be many fewer of them, at more realistic and sustainable prices.

The gift economy will dominate, because a price of zero is the only viable one when no one trusts the price of anything. We will once again become principally scavengers in a salvage economy, using whatever we can find at hand, because the cost of new production, import and export will simply be too high to justify the effort. For just about everything, the supply/demand curves will have no intersection — the price people are able to pay for most goods will be less than the cost of production.

So our relationships with people who have a surplus of what we will need in this radically new economy will be paramount. Better get to know our neighbours a whole lot better — especially those who produce food or who know how to hand-make and fix things.

And we’ll have to relearn how to build true community in the physical place we live. Once we’ve done that — gotten to know our neighbours and what we can do for each other, narrowed our transactions to people we directly know, evolved to accept that gifts, salvage/reuse potential, and personal relationships will determine the value of everything, and who we transact with — trust will likely follow and prevail naturally, as it did for most of our species’ history. There will be no affordable oil, cheap imports, reliable power grid, stable climate, or fiat currencies to drive us back to impersonal transactions and anonymous markets. We will move on to a world where life is one of subsistence and sufficiency, and a hyper-local exchange of needed goods and services based on gifts, trust, relationships and salvage values. And constant migration to places still not rendered un-livable by ecological collapse. Much of the world is already there.

Challenging and exciting times ahead. But it’s no one’s fault, and there are no solutions. We will learn to adapt where we are and in each new place we migrate to, adjusting to civilization’s gradual and awesome collapse over the coming decades. Exactly as past civilizations have done as they collapsed. It will be that adaptation, in place and while migrating, not some grand new design for a better global economy and society, that will determine our species’ future, if indeed we have one.

I understand if you don’t trust me on that.

5 Responses to Trust in a Collapsing Economy