CoVid-19: The Long Road Ahead 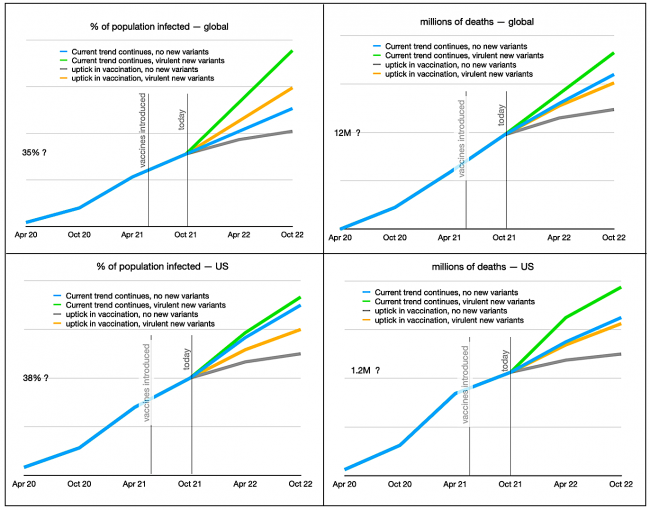 As we head into another winter season of the pandemic, there are a number of scenarios that might play out from here. We are still enormously ignorant about many important facts about the virus and the pandemic, but some things are pretty clear:

Some other things are completely unclear, and are likely to remain so, perhaps forever:

So that leaves us with the possible scenarios outlined in the charts above. What they suggest is that, far from the pandemic being close to its end, as we’d hoped when the vaccines were introduced, we’re really not far beyond the middle. Few countries have achieved the 80-90% vaccination rates needed to achieve herd immunity, especially with borders opening, mask mandates being dropped, and the extraordinary transmissibility of the Delta variant. The blue “business as usual” projections in these charts presume that vaccine take-up among the unvaccinated will remain sluggish, as we enter the winter season in the Northern Hemisphere which last year saw a sharp upward spike in CoVid-19 infections and deaths. It suggests that a year from now we will not be much further ahead than we are now in terms of getting the pandemic under control.

If there is a dramatic uptick in vaccine take-up, and if the aged and vulnerable get booster shots, then a year from now (grey lines) we might finally be able to do everything we could do before the pandemic, though we will probably still be using masks as prophylactics indoors with strangers or in areas of the country and world with continuing high case rates. That’s the best case scenario.

If there is a new, more virulent variant (and with current low vaccination rates there is lots of time and lots of places for one to emerge), then all bets are off. The radically virulent variant that emerged in 1918 after the initial waves put everything back to square one, as it primarily sickened and killed the young and the healthy, notably children, and this is the age cohort that would be most vulnerable to such a variant now, since their vaccination rate is very low almost everywhere in the world. We could see infection and death rates much higher than what we have seen to date.

Why is this going on so long? It’s a combination of factors. Our modern way of living and travelling allows new viruses to reach every part of the world with unprecedented speed. Our lifestyle in affluent nations prevents our immune systems from learning healthy and powerful responses to pathogens, because of our nutritionally poor, unvaried diets and our excessive use of antibiotics and chemicals. Fear of governments and other authorities has increased public opposition to mandates and vaccines, and hence led to much lower rates of compliance with health authorities’ recommendations. Public health departments have been systematically starved of needed resources for research and preparedness for decades. And bad luck has also played a part — the accident of the virus’ first appearance, its extraordinary transmissibility, and more recently the rapid pace of its mutation.

While flu pandemics have tended to be short-lived, other viral pandemics (such as polio and AIDS) have gone on for years, even decades. Just as 9/11 may have permanently changed our experience of air travel, it is possible that CoVid-19 will usher in permanent changes in our social and work behaviour. The real surprise is that, with all the preconditions in place, it has taken so long for a pandemic to have as great a global impact as CoVid-19 has. If you were dreaming about a celebratory mask-burning to mark the end of the pandemic, best put such thoughts out of your mind for the foreseeable future.

8 Responses to CoVid-19: The Long Road Ahead