This is the 22nd in a series of articles on CoVid-19. I am not a medical expert, but have worked with epidemiologists and have some expertise in research, data analysis and statistics. 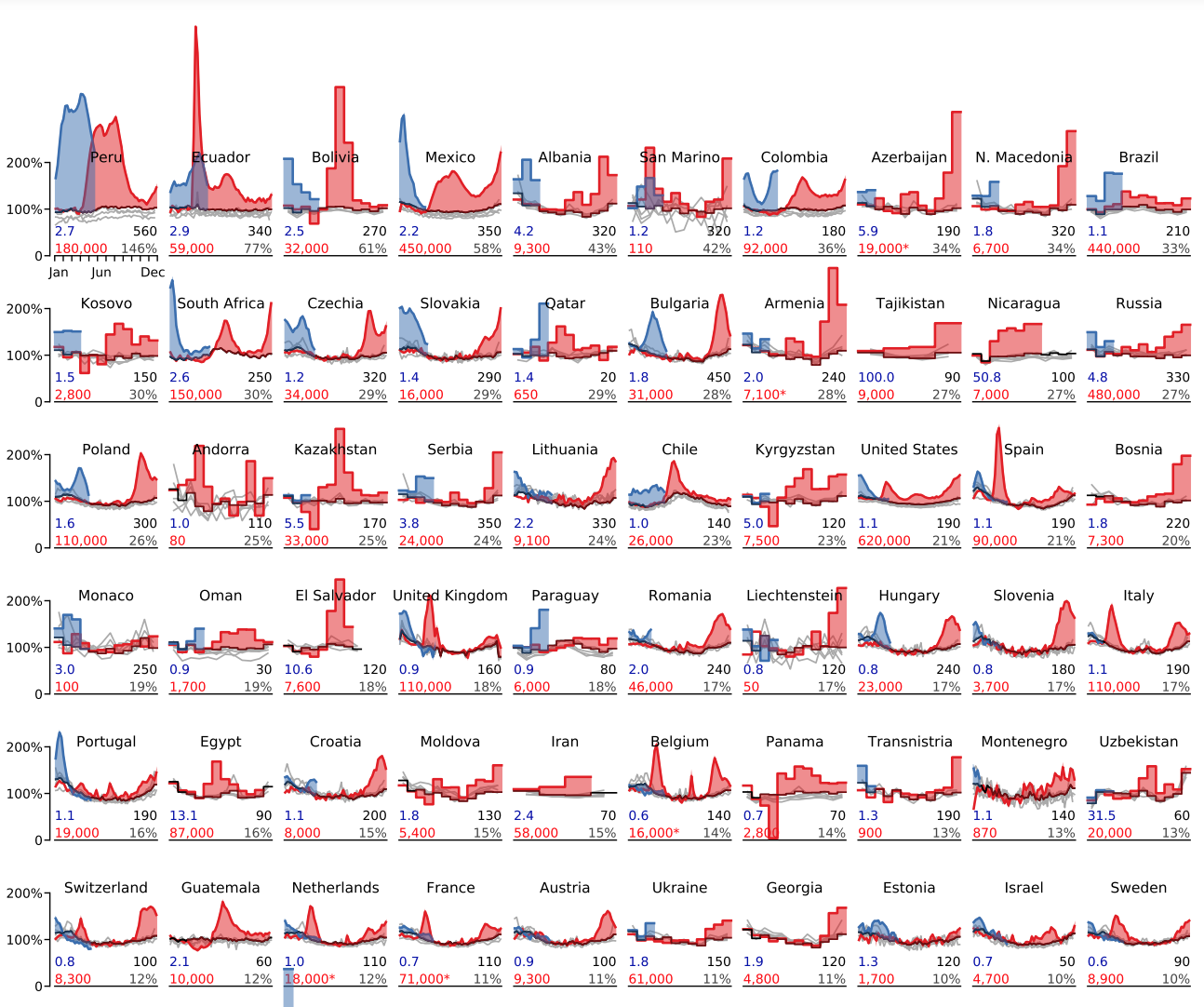 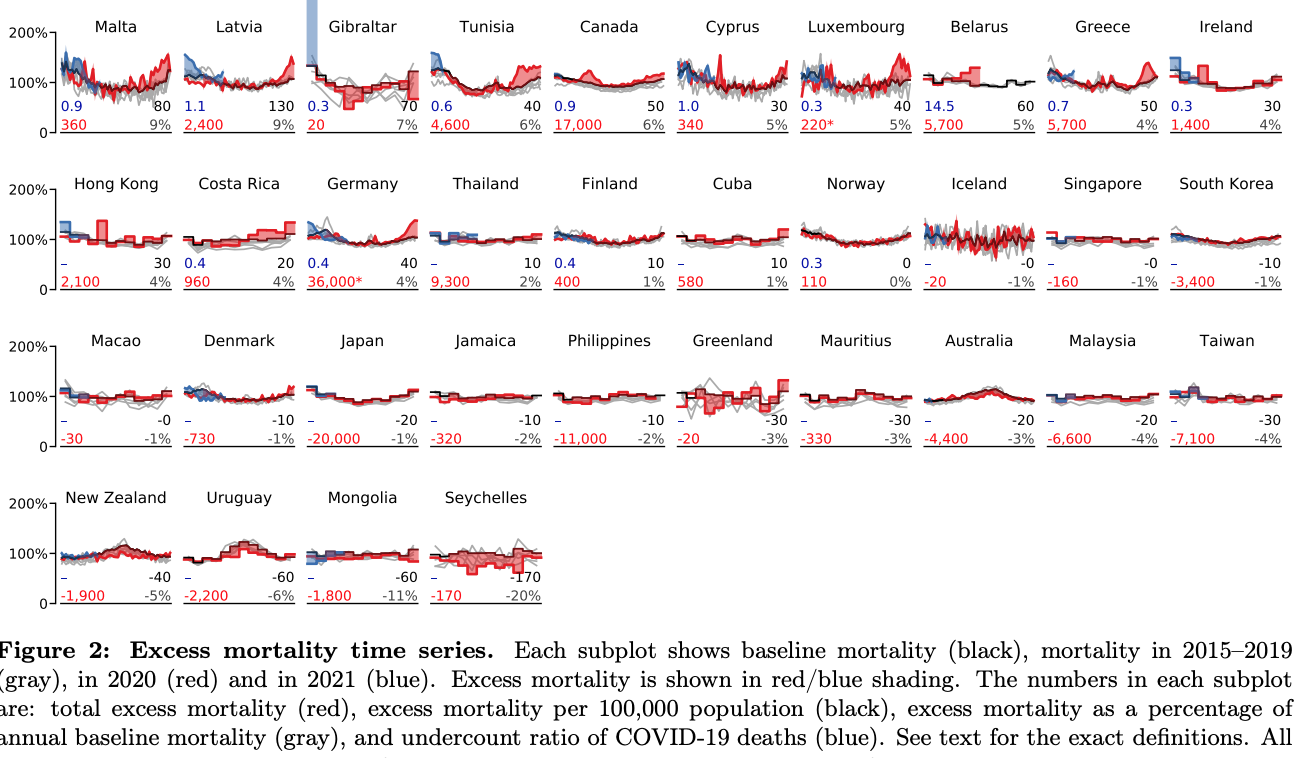 Throughout the pandemic, the U of Washington’s IHME has been estimating the actual number of cases and deaths (as distinct from the reported numbers) by relying on a host of sources of “excess deaths” (the total number of reported deaths from all causes since the pandemic began, less the “base line” average number of deaths for similar periods between 2015-2019).

Their hypothesis is that other factors contributing to “excess deaths” (eg number of people dying prematurely of other causes due to lack of access to overcrowded hospitals, number of lives saved due to less traffic, fewer industrial accidents, and less exposure to other infectious diseases while masked) all tend to balance out over time. That’s not an unreasonable assumption, and many other studies support its use.

On this basis they have been estimating that globally on average the actual CoVid-19 death toll has been 2.2x the reported toll, and in North America it is has been on average 1.6x the reported toll. This past May, as I reported, IHME went all-in, essentially focusing its reports on excess deaths data and downplaying the significance and value of reported data. Since I was frustrated with the political games being played in many places (like the US South, and Russia) suppressing CoVid-19 numbers in their reports, I went along with this “leap of faith”.

I suppose I should have known better. In their zeal to cover the whole world, they have used dubious and apparently inconsistent methods to collect, estimate, and extrapolate data, and have repeatedly been caught with ludicrous estimates and projections, particularly at the sub-national level, at various points during the pandemic. But they all seemed to balance out at the national and global level, so I stuck with them.

It turns out they seem to have been essentially reverse-engineering the data to match the unreliable excess deaths numbers they had, and to match their models of what actual numbers should be if their very complicated model was correct — actual data that didn’t fit the model seems have been ignored.

In June, a number of organizations, perhaps fed up with whip-sawing estimates from IHME and others on “estimated actual” death tolls and IFRs, began publishing exhaustive studies of excess deaths that contradicted the numbers being produced by IHME and others.

The best of these I have seen is the World Mortality Dataset (WMD) published in June under a CC licence. I would caution that this is not yet peer-reviewed, but its authorship appears earnest, extremely thoroughly researched, and free of conflicts of interest and axes to grind. Its conclusion is starkly different from IHME’s. It concludes that in jurisdictions with relatively robust, credible health reporting systems, the true ratio of excess to reported deaths from CoVid-19 is close to 1.1x, far lower than the 1.6x IHME has been using. And globally, while it’s much less precise, the ratio is somewhere in the 2-4x range, significantly higher than the 2.2x ratio IHME has been using (WMD’s computed undercount ratio is 4.8x for Russia, for example, and 13x for Egypt).

The chart above, from WMD, shows the number of excess deaths since the start of the pandemic (through May 2021) in each country in red, and the the undercount ratio in blue.

For countries with the most advanced and apolitical public health care systems, such as the UK, Holland, and Canada, the WMD-computed ratio to the end of May 2021 (though there is a significant reporting lag in some countries) is actually closer to 0.9x, suggesting that (a) the reported data in those countries, far from missing 3/8 of the actual CoVid-19 deaths as IHME has assumed, were actually extremely accurate, and that (b) the combined effect of the economic slowdown, masking, and reduced mobility actually reduced national death tolls from non-CoVid-19 causes in such countries to significantly below normal levels. This is even more marked in countries like Germany, France and Belgium.

So here’s what WMD is saying were the actual CoVid-19 deaths to May 2021, compared to what IHME was estimating:

And here’s how the ratios of estimated actual to reported deaths (the “undercount ratios”) compare for the two organizations:

It has taken a few months for IHME to realize they are now wildly offside the global consensus on the total toll of this pandemic. But suddenly, last month, we saw some wildly new numbers from IHME, applied retroactively and selectively.

Suddenly, it seems, a quarter of a million Americans have risen from the dead. Hallelujah! Their new death toll estimate to the end of May is just 685,000, versus the 923,000 that they had estimated at that time. In fact, they estimate it’s only risen to 873,000 today, and — praise be! — may not ever top a million despite the vast numbers of Americans unvaccinated and the reported death toll staying steady at 10,000 per week. All those CoVid-19 deniers and data suppressers in Texas and Florida were apparently tracking and reporting almost all their CoVid-19 deaths faithfully after all! Oops, our mistake!

Of course, to make the model still work, IHME has had to make up the shortfall by plugging the differences to other countries. So while Texas and Florida have purportedly reported 90% of their deaths, apparently Canada has reported only just over half of its, and Japan just over a quarter of its. Must be those damned centralized universal health care systems! (WMD data suggests Canada and Japan have actually reported well over 95% of CoVid-19 deaths)

Needless to say, the IHME data is now completely without credibility, and I am sure the more competent health care systems are switching to use WMD and more sensible data sources to estimate the total toll from the disease in their countries.

More importantly, we can now safely ignore the IHME estimates and go back, at least in the anglophone countries and western Europe, to relying on reported data for deaths. They’re far more accurate than we thought.

The next step is to figure out, from these more reliable death data, what the actual infection rates are in each country, and hence what the IFR curves (by age cohort) are for each country. This is enormously important in determining strategy for dealing with the pandemic going forward. Only when we know the actual infection rates (% of population infected) and infection fatality rates (% of infected people dying from the disease) can we begin to assess the consequences of relaxing restrictions (especially in countries where the sum of % infected + % vaccinated remains well below 90%). There is a huge danger of additional, radically different mutations of this virus evolving as long as the pandemic drags on. We must do everything we can to get the unvaccinated to speak with people they trust to overcome their vaccine hesitancy and/or fear, get vaccinated, and stop this pandemic.

And with the commercial introduction of new selective antivirals to the fight against CoVid-19, there is a new peril: These pills are (so far) far less effective than vaccines and will not slow the spread, and antivirals open up the possibility of new mutations that are both resistant to the antivirals and immune to current vaccines, and hence could put us right back to square one, fighting a new pandemic against a new and even more lethal and uncontrollable virus.

1 Response to IHME Reverses Course on Excess Deaths, and Crashes