The Right to Do Nothing 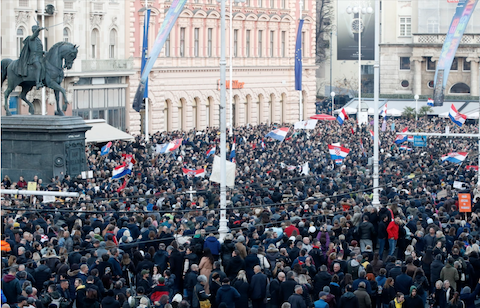 one of many recent anti-mandate protests in Europe and the Caribbean, this one in Croatia; AP photo via Al Jazeera

The arguments against getting vaccinated are now coalescing around the issue of “mandates”. These arguments no longer insist that the vaccines are necessarily useless or dangerous (though many of course think they are), but instead assert that making them mandatory is political overreach and/or a potentially dangerous abuse of power and authority, a “slippery slope”.

This seems to be a “big tent” type of argument, designed to bring together three disparate groups of the vaccine-hesitant: the misinformed and paranoid who believe the vaccines are unnecessary and/or dangerous; those with PTSD and other medical histories that have made them afraid of needles; and those across the political spectrum who think governments have too much power and that that power needs to be reined in.

Whipping up anti-government anger, distrust and fear is easy to do when our modern governments are disconnected from their constituents, when the news is replete with stories of government corruption, graft and abuse of power, and when many people, full of dread about the future and shame about their current situation, are looking for someone to blame. Right-wing ideologues and populist psychopaths have exploited this easy path all over the world to seize and entrench power in recent years, and have already established what are effectively fascist regimes in much of the world. In the process, they have destabilized democracies in most of the remaining countries.

As global information and communication leads to ever-more cultural homogeneity, it becomes increasingly doubtful that our remaining fragile democracies can survive the systematic attack by the rich, powerful and psychotic to undermine them by disseminating misinformation, disinformation, and fomenting distrust in all public institutions.

As a result of this distrust, the current pandemic, which would have been over by now if 90% of the population had been promptly vaccinated this summer before the delta variant exploded, is now likely to go on at least another year, and longer if new deadlier or more transmissible variants emerge in the huge pool of the unvaccinated. With prompt and full masking from the outset, the global death toll would almost certainly have been less than a million. With prompt and universal vaccination, it would likely have been less than three million. But now it stands at close to fifteen million, and is likely to kill at least another seven million as the world remains paralyzed into inaction.

And that’s just one of the costs of the destruction of trust in public institutions.

I have said before that I think we believe what we want to believe, regardless of what is actually true. So it seems to me that what we are now witnessing is a classic symptom of civilizational collapse — the giving up of belief that the current systems that govern our behaviour are still serving us well, and at least metaphorically the “walking away” from our teetering global, centralized, industrial culture. Sadly, in our horrifically overpopulated world, there is nowhere to walk away to (although the tech billionaires in their space suits are still in denial that their experiment is over, and still trying to sell us on the next one).

This suggests to me that we won’t be able to avoid the social collapse that often accompanies political, economic and ecological collapse when civilizations fall apart. To avoid social collapse would require a willingness to relearn how to create and live in radically relocalized communities, and to trust and even love the others who happen to live in those communities. As collapse worsens, it would seem naive to think we are going to learn to trust each other when our trust has been so recently and severely destroyed by those seeking to profit from our disconnection and disunity, and by the sheer dysfunctionality of the oversized, bureaucratic, centralized, one-size-fits-none systems we naively built thinking they would make the world better.

Gene McCarthy warned fifty years ago about our society’s growing proclivity for acedia — an incapacity to care for or about other people, especially those “different” from us. As horrific as the consequences of that might be (if we don’t care, there’s nothing we won’t do), this emotional distancing of ourselves is actually pretty understandable. We can’t care when every time we do, we are let down. We can’t care when it hurts too much to care. So we protect ourselves by inuring ourselves to others’ suffering. Once we’ve given up trust in others, and in our public institutions, and given up caring for others, social collapse is inevitable. It’s everyone for themselves.

That means that, just as this pandemic has been much worse than some previous ones, and much worse than it needed to be had we all pulled together, so will our civilization’s collapse be more brutal and violent than it needed to be. That’s tragic, but understandable, and probably the only way it could have ended up. There will still be pockets of mutual care and community-building as collapse deepens, among those not badly damaged by civilization’s excesses and atrocities, and we will have to settle for that. It’s a long way down.

With that context, what does this explosion of fear, distrust, acedia and despair mean for the trajectory of the current pandemic? While the virus will do what it will do, either fading out as it runs out of hosts, or resurging with new mutations, my current sense is that we will see additional manifestations of this “giving up” in our pandemic-related behaviour.

Currently, we sit idly by and witness tens of millions of unnecessary deaths, and unfathomable amounts of unnecessary suffering, every year, from eighty diseases clearly caused by poor diet and malnutrition. The reasons we eat so badly, and refuse to admit it or correct it, are complex. We could blame the industrial food system, capitalism, false advertising and other forms of misinformation, the overly frenetic pace of our lives, inequality, or, as we are increasingly inclined to do, we could blame the victims. When we can no longer care — when the feelings of overwhelm, shame, grief, and helplessness force us to turn away — we have to blame the poor, the sick, and others who are struggling, for their own suffering. It is the only way we can cope.

I think we will, likewise, turn away from this pandemic and its victims. Those of us vaccinated will blame the unvaccinated for their own suffering, and for exposing the rest of us to additional unnecessary illness. Views will harden. Violence, like we are seeing in many countries by citizens railing against “mandates”, will increase. Mandates will increasingly fail because they rely on a certain level of acceptance and compliance, which will no longer exist.

Until and unless the pandemic wanes as more and more of the population gets infected with it, events will polarize into “vaccines and masks” activities, and “no mandates” activities, with inevitable protests and scuffles resulting from that. If a new, more (or differently) virulent strain emerges before that, we are well and truly fucked. And then, there’s the huge unknown of “Long CoVid” with its potentially billions of sufferers further straining our already-faltering health care systems.

It’s interesting to compare the reaction to vaccine and mask mandates to the reaction, fifty years ago, to seatbelt mandates in cars, and even to mandatory testing of apparently drunk drivers. I know people who still object to seatbelt use mandates, and their arguments are virtually identical to those made against vaccine mandates. They even fall into the same three categories (“they don’t work”, “I have a medical/psychological condition that exempts me”, and “governments have no business telling us what to do when it comes to our own bodies and property”). They tell the same worn stories about someone they knew who died because they got pinned in by a seatbelt, and the statistics be damned.

But their numbers are tiny compared to those opposed to mask mandates. Are things, and people, just different now when it comes to mandates? I suspect they are. There is a lot less trust now.

What happens when the bulk of humanity becomes permanently angry, distrustful, fearful, and uncaring — when that’s the only way they can cope with the sheer overwhelm of a society that seems headed for catastrophe, that seems incompetent to address it, that seems beyond understanding, inexplicably and outrageously immoral, and insensitive to the suffering it is causing? The same thing that all animals do when they no longer have the option to fight (the “enemy” is too strong to engage, and too amorphous to identify) or to flee (there are no frontiers left to run to)?

We freeze. We become paralyzed. We refuse to comply, to be complicit with what we can neither appreciate or condone. We resist. We stay still and do nothing. When it’s a seatbelt mandate, we cut them out and disengage the alarm. When it’s a vaccine mandate, we refuse, instead falling for quack cures — we’ll deny there’s a problem, or we’ll try anything provided the government and public institutions haven’t authorized or demanded it. Even better if the government rails against these “alternatives”. In other words, in our infantilized, dumbed down modern society, we have a temper tantrum, screaming and punching and sitting down with our arms crossed and refusing to budge.

When everything is seemingly unfathomably complicated and unacceptable and hopeless, we demand the right to do nothing. I kind of get it. Were it not for my education, my passion for research and knowledge, my analytical skills and my experience working with really smart, caring people in public service, I might be caught up in the same reactionary paralysis. I am extremely blessed by my life’s circumstances and by the relative lack of trauma affecting my thinking and my judgement.

The humanitarians I know say the answer is to quietly, patiently educate, inform, and help heal our fellow citizens, to help them move past their fear, their anger, their distrust, and their incapacity to see what, on the balance of probabilities, makes sense. I admire their idealism, but I think we’re long past that point. If a large, and growing proportion of the world is still in denial about the existential threat of climate collapse, why would we think we can find common ground with them on issues that are more personal, more immediate, more triggering?

I am often asked how, when my views on collapse and other issues are so relentlessly pessimistic, I don’t shut down in despair. Again I would say it’s due to my privilege — to have had, and to have, access to the information, time to think, capacity to think things through and to imagine possibilities, a relatively healthy and stress-free life, and people and resources to help me make sense of things. Most of the world’s people have not been so privileged, and as much as their beliefs and behaviours perturb me, I get why they are where they are and why they react the way they do. We are all healing. Some of us better than others.

4 Responses to The Right to Do Nothing