Humour as Weapon, and Healer 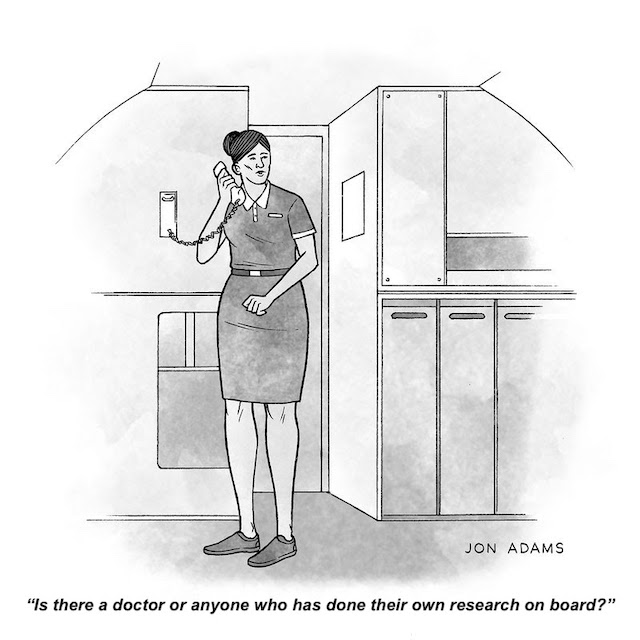 cartoon in the New Yorker by Jon Adams

A sense of humor is a measurement of the extent to which we realize that we are trapped in a world almost totally devoid of reason. Laughter is how we express the anxiety we feel at this knowledge.
— Dave Barry

What you consider funny probably says a lot about you. That’s not a judgement — I’m not suggesting some humour is “better” and some humour is “worse”, just that the things that make you laugh likely reveal things that have happened to you in your past, and how you’ve reacted to them.

We are, after all, conditioned creatures, and our conditioning will influence how we react to a situation, or a joke. We are all, to some extent, I think, also healing, and afflicted by trauma of one kind or another, and humour can serve both as a weapon (to ridicule others we’ve been conditioned to hate, or fear, and hence make us feel superior), and as a source of healing (to empathize, soften, and/or recognize another’s suffering, or our own).

The trend in “professional” humour (comedy films and series and stand-up routines) seems to be largely the former — it is increasingly mean-spirited, demeaning and ridiculing “others” as a way of feeling better about our “not-like-them” selves. I see that as a sign that, as our civilizational collapse deepens and evokes more and more anxiety, grief, shame, guilt and anger in us, we are using humour directed against others to cast blame and demean those we hold responsible for that collapse, and hence to absolve ourselves from responsibility for it. That’s perfectly understandable, especially for the majority that clearly still believes that someone must be to blame and that something could/should be done to make things magically better.

I used to write fairly vicious satires in that mould. Rants serve the same purpose, and are easier than humour to pull off, and they can be entertaining (especially if we agree with the ranter), but they are rarely really funny. Comedians frequently use rants, but they are dangerous when it’s realized that, though you have come to hear comedy, what you are being served up is something else.

“I was just kidding of course”, is the lamest line ever spoken, and it’s usually dishonest.

Stand-up comedians often (though less than they used to) use self-deprecation to make themselves the object of their own humour, which can soften up their audience, evoke less triggers than using others as the butt of their jokes, and even, by evoking empathy in the audience, even help us see the absurdity of our own similar situation and make us laugh at it.

Of course, some humour isn’t personal at all. Puns and other humorous wordplay, and absurdist humour, are not ‘about’ anyone. They make us laugh for a different reason — incongruity and surprise.

Well I suppose I can’t get away with writing an article on humour without relating a few jokes to make my point. The cartoon at the top of this post is an example of what I would call attack humour, ridiculing “others”. Since I feel strongly about the subject, and sympathetic to the cartoonist, my initial reaction is to find it funny. But if the shoe were on the other foot, I would certainly not; I would be angered and triggered. This is dangerous ‘humour’, and perhaps not humour at all? I still enjoy it though, for all the shame that brings up in me.

The Potentially Inappropriate Memebrary group deliberately eschews (as best as its moderators can) politically-barbed humour, for this very reason. They want everyone to enjoy the joke, and I laud that. Here’s a doc with my favourite Memebrary memes.

Here’s a John Green joke that I love:

I went into Starbucks and asked for their mildest roast. They said “you have very average ears.”

And here’s a Dave Barry joke that I love:

It is a well-documented fact that guys will not ask for directions. This is a biological thing. This is why it takes several million sperm cells to locate a female egg, despite the fact that the egg is, relative to them, the size of Wisconsin.

Then there is wordplay humour that also tickles me, especially if it’s complex enough to have more than one “punch line”:

After Quasimodo’s death, the bishop of the Cathedral of Notre Dame
sent word through the streets of Paris that a new bell ringer was
needed. The bishop decided that he would conduct the interviews personally
and went up into the belfry to begin the screening process. After
observing several applicants demonstrate their skills, he had decided
to call it a day. Just then, an armless man approached him and
announced that he was there to apply for the bell ringer’s job.

The bishop was incredulous. “You have no arms!”.
“No matter,” said the man. “Observe!” And he began striking
the bells with his face, producing a beautiful melody on the carillon. The bishop listened in astonishment; convinced he had finally found
a replacement for Quasimodo. But suddenly, rushing forward to strike a
bell, the armless man tripped and plunged headlong out of the belfry
window to his death in the street below.

The stunned bishop rushed to his side. When he reached the street, a
crowd had gathered around the fallen figure, drawn by the beautiful
music they had heard only moments before. As they silently parted to
let the bishop through, one of them asked, “Bishop, who was this
man?”.

“I don’t know his name,” the bishop sadly replied, “but his face
rings a bell.”

The following day, despite the sadness that weighed heavily on his
heart due to the unfortunate death of the armless campanologist, the
bishop continued his interviews for the bell ringer of Notre Dame. The first man to approach him said, “Your Excellency, I am the brother of the poor armless wretch that fell to his death from this very belfry yesterday. I pray that you honour his life by allowing me to replace him in this duty.”

The bishop agreed to give the man an audition, and, as the armless
man’s brother stooped to pick up a mallet to strike the first bell,
he groaned, clutched at his chest, twirled around, and died on the
spot. Two monks, hearing the bishop’s cries of grief at this second tragedy,
rushed up the stairs to his side. “What has happened? Who is this
man?” the first monk asked breathlessly.

“I don’t know his name,” sighed the distraught bishop, but he’s a dead ringer for his brother.”

And then there is wry humour that includes a second-layer element of truth:

So I have learned a bit about myself by understanding that I love certain types of humour: particularly clever puns and crossword clues, absurdist, impromptu and hyperbolized humour, self-deprecating, gentle satire and parodies, jokes with multiple punch lines, and humour that also conveys an element of truth. And that I am suspicious of humour “aimed” at others. I’m not entirely sure why some humour appeals to me while most humour does not. I suppose it’s a bit like why I am crazy about an eclectic mix of songs and completely indifferent to other songs, even those considered “classics”.

It’s a bunch of cultural conditioning, and I suspect a bit of biological conditioning. When I first hear a great joke, it’s almost as if I know I’m going to love it before it’s even finished being told. Just as I usually fall in love with songs, or not, even before I hear the first chorus. No accounting for taste, though trying to do so is fascinating.