How the New Fascists Finally Won the Propaganda War 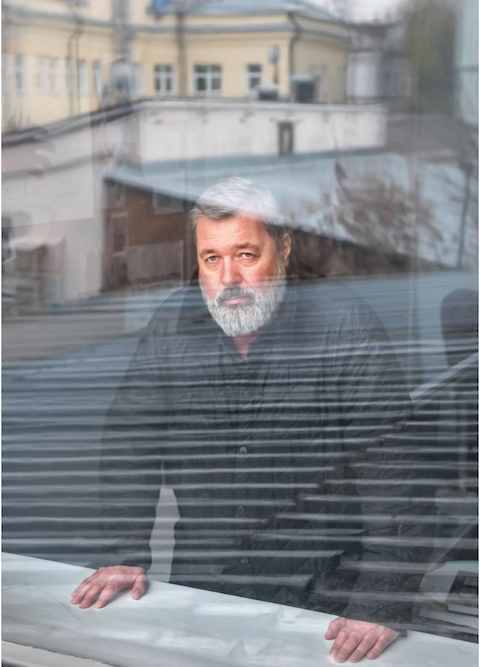 Dmitry Muratov, Russian journalist and co-winner of the 2021 Nobel Peace Prize, has expressed concerns about the world’s slide into fascism. Image by Elena Anosova for The New Yorker.

And so we believe what we want to believe. And we are suckers for stories. Tell us one moving story that reinforces our beliefs, and we’ll gladly discount a terabyte of data that refutes them. That’s our nature. That’s how we make sense of things. That’s how we cope with the horrific and relentless stresses and fears of modern life. For whatever strange reason, that has proved to be a successful evolutionary strategy.

And, understandably, we want to be “free”. That doesn’t mean most of us want anarchy. We want other people to take most of the responsibility for looking after things, especially when the scope and complexity of things seems increasingly onerous. But we want them to be responsible, and to do the work, according to our instructions. If the people we delegate responsibility to don’t follow our instructions, don’t believe the same things we believe, then we feel we are not “free”. But if they do, then we believe we’re “free”, and we accept the limitations that living in a complex world controlled by us “good guys” requires.

And finally, we want to be safe — free from existential danger and fear.

For more than half a century, I have been studying what this means for human civilizations. I learned how populists, under a variety of authoritarian and anti-democratic banners, have so often propagandized people through fear, misinformation and disinformation, into believing the same things they did, and into ignoring the atrocities they committed. Stalin, Hitler and Mao, between them, killed over 150 million people in the last century, and, while they were feared, they were also immensely popular. They galvanized the majority of the population around opposition to perceived common enemies, enemies that were already distrusted, and then they recruited them to go to war against those enemies in defence of their common beliefs.

Fascism is defined as “standing for a centralized autocratic government headed by a dictatorial leader, severe economic and social regimentation, and forcible suppression of opposition.” Doesn’t sound very “free”, unless you’ve been propagandized to believe that that autocracy is fighting a powerful enemy that has robbed you of your freedom and safety, and that the dictator is one of you, one of the “good guys” trying to restore your freedom and safety.

Moneyed, colonial, imperialistic interests successfully controlled, oppressed and exploited most of the world for their personal gain from before the dawn of the industrial era, until the early 20th century. It was only really then that the information age seemed to began to awaken people to their subjugation. The emergence of new media set off a power struggle over the instruments of propaganda that were used to keep the people ignorant and in thrall. The result was the bloodiest century in human history.

When the dust settled in the middle of that century, there had been an astonishing shift in knowledge and power. A large proportion of the population was now going to university, and being exposed to ideas that threatened the existing power structure. The New Deal had dramatically redistributed wealth and power to the working class. The witch hunts of “communists” in the 1950s, instead of re-establishing repression of the enemies of the ruling castes, turned into a PR disaster. Students by the millions were allowed to demonstrate against the imperialists’ wars with virtual impunity. The dominant castes were losing their edge.

Something had to be done. So the ruling castes began what has become a long and enormously successful propaganda campaign to win back the hearts and minds of the belligerent, disobedient under-castes, through a three-pronged strategy:

The objective was to restore the power of the ruling castes, and enable the re-oppression of the under-castes. In other words, to restore the old order. This was achieved through trial and error starting in the Reagan/Thatcher era, intensified during the Cheney/Bush era, and has been finalized during the Trump era, which is still ongoing.

To reiterate: This is all about power, and who has it. Political ideology is just a smokescreen, a means of manipulating and shifting power.

The obvious model for the ruling castes to use was the fascist-populist model employed so effectively by Stalin, Hitler and Mao. The key to implementing this model was to systematically undermine public confidence in government, public institutions, and the media. Fascists had seized and kept power by convincing opponents that no one could be trusted, but that they (the fascists) had the backs of the “common man”. Its modern manifestation is Norquist’s vision of making government so small “you can drown it in a bathtub”.

But theirs is not an anti-authoritarian, anarchistic, libertarian utopia. By “government”, the fascists mean the democratic institutions of government that distribute wealth and power and are subject to the whims of popular opinion. Under the new fascists’ vision, power would not be transferred from pseudo-democratic governments to the people; but rather to the unelected, ruling caste elite (including the military-industrial-security apparatus) which had dominated for centuries before it had been disrupted by institutional and educational reforms, and the power of new media, in the early 20th century.

And they have accomplished this quite spectacularly over the past half-century. Suspicion and distrust of government has never been so high. Public institutions in health, education and other sectors focused on the common good have been starved to the point of total dysfunction, destroying their effectiveness, credibility and reputation. Progressive taxes have been eliminated, and the reputations of tax authorities destroyed. Inequality of wealth and power has reached staggering, obscene levels exceeding even those of the Robber Baron era.

How was this accomplished?

Giving up the moral high ground meant that it was now perfectly fine for the new fascists to use their bought-and-paid-for media to propagate deliberate and carefully orchestrated lies to further their aims, even as they repeated the myth of “liberal” media. So, for example, while there is no longer any controversy that the justification for the Iraq War was completely fabricated to suit the military-industrial-security apparatus, Big Oil, and anti-Arab imperialists, there have been no absolutely no consequences for anyone who participated in this deliberate, egregious, and staggeringly-costly lie. We all know who lied, and why. The end justified the means.

Goebbels famously said that if you tell people lies often enough they’ll eventually come to believe them, and this tactic is now a standard part of the new fascists’ playbook. It’s been used to extraordinary effect in the campaigns to deny climate collapse, to deny the current pandemic, and to deny the effectiveness and safety of vaccines. Of course, decades of fear-mongering about government, and starving and undermining the credibility of public institutions, made this all pretty easy.

The “divide and conquer” strategy began by smearing labour unions, spreading lies about wholesale abuse of public medical, environmental and social security programs, and fear-mongering in small towns about crime in multi-ethnic cities. In two short decades the non-urban working castes were wrenched away from their support for progressive political parties and government support programs, and are now staunchly allied with the new fascists’ anti-government, anti-regulatory, anti-democratic, and anti-public-services agendas.

Dividing and conquering progressives was a bit trickier, but not by much. The new fascists started with the libertarian and anarchist segment of progressives, exploiting their innate fear and distrust of governments to the point they could be convinced that anything done by government was suspect: 9/11 was an inside job, governments are building prison camps and gulags to round up dissidents, troops are being used as guinea pigs to test dangerous new drugs and vaccines, governments want to surveil everything and everyone and have recruited Bill Gates to implant chips in us all, etc. I bought a lot of these arguments for many years until I realized who really benefited from their widespread acceptance. And that they didn’t make sense.

So now we have a situation where new fascist regimes have been installed in states from Texas to Florida and beyond (including an increasing number of countries around the world), offering, for example, huge bounties to vigilantes to rat on their fellow citizens if they seek abortions or buy abortion pills through the mail. States where voter suppression, gerrymandering and other anti-democratic laws are being institutionalized to ensure that only the new fascist party can ever win. Where systemic racism, misogyny and homophobia are being formally and “legally” legitimized. Where new fascists buy their children machine guns for Christmas and encourage them to use them to intimidate people who “aren’t like us”. And no one, least of all the new fascist US supreme court, is stopping these regimes from taking ever-more-extreme, dangerous, and hate- and violence-inciting laws and actions.

So what are progressives doing while all this is going on? Why, we’re arguing among ourselves about whether vaccine mandates and mask mandates are anti-democratic and whether the science behind vaccines is suspect.

The new fascists have won the propaganda war. It has taken a half-century, but that war is over. By 2024 the US will likely have a new fascist federal government (in some senses, under the war-mongering right-wing Biden administration, it may already have one). And there is now no counterbalancing force on the planet to rein them in. Many countries around the world are on a similar path, or are already there.

So the plutocratic ruling castes will continue to use these governments to consolidate their money and power, and continue doing whatever they want, with impunity. Opposition parties may try to swing hard-right to emulate the success of the new fascists and try to wrest some power back, but for the most part they have already compromised so much to the wealthy and powerful that they will be dismissed as irrelevant. Any true opposition will be ruthlessly repressed.

This is what, I fear, we are most likely to be dealing with when global economic collapse weighs in with full force, followed by the rapid acceleration of ecological collapse. It’s tragic. It’s going to be a lot harder than it needed to be. But that, it seems, is the nature of the human species. When it comes to power, the use of it, and the fear of not having it, we don’t seem to be able to help ourselves.