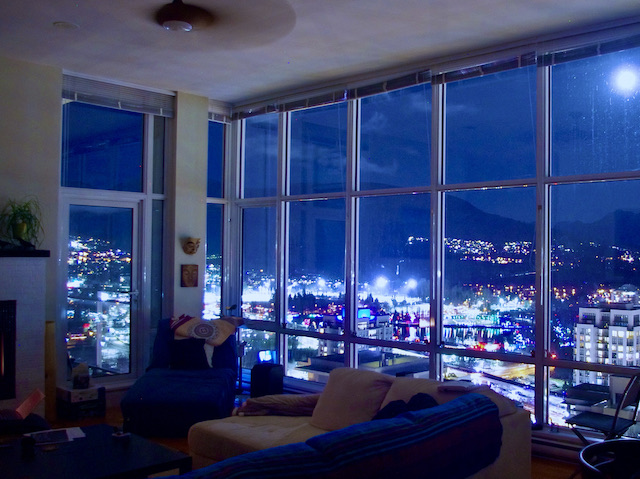 So I go out for a walk, in the moonlight. There’s still some snow on the lawns of the houses I pass. I make my way to the river path, and wander along the river, heading north. The full moon is so bright I can see my way along the unlit path, and see my breath, without needing my flashlight.

It’s never terribly quiet here, in the city, even at night, but in some ways that’s comforting. I’m much more aware of, and dismissive of, my many anxieties and fears that crop up regularly, than I used to be. But that does not prevent them arising, for absurd and inappropriate reasons, and occasionally transporting me away from my more usual state of equanimity. So the presence of the constant hum of the city, its sense of normality in the face of everything, seems preferable to the quiet isolation of my former home, where every sound stood out.

I wonder whether my incessant anxieties are a function of the lack of real distress in my life, so that, lacking practice in dealing with real issues as they arise, and moving on, I am more prone to get distressed by worries that are entirely of my own invention. Worst possible cases that never actually arise.

So there’s the anxiety arising, and then the rationalization and dismissal with the realization of its foolishness, and then the shame of not being able to control my reactions anyway. The feelings of foolishness and helplessness. Fears of suffering, of loved ones suffering, of things being out of control, of failure, of ridicule, of unexpected loss. I am so fortunate — “the world’s most blessed agnostic” — but knowing that doesn’t change anything.

The guy who used to run the hot dog stand in the cove used to spend the coldest six months each year in a small town in México, living with a family he’d met during a visit to a resort there, offering them a monthly rent for their small extra room, a rent that was an enormous amount to them, but a tiny fraction of the monthly rent he paid for his Canadian house. One year the owners of the hot dog stand decided to staff it with others, and the guy just disappeared. Someone said he and his wife had moved to México year-round.

I wondered if I could do that — go and live somewhere where life was cheap and warm but in some ways very precarious, where if something happened, you were pretty much dependent on your own resources, and on the support of people you knew. Such a different precarity from that of most Canadians, with our ‘health and social security net’, yet completely dependent on centralized systems, imported goods, a steady income, and specialists who do everything for us that, in many cases, we used to know how to do ourselves. I’m a slow learner, uncoordinated and not very good with my hands, so I suspect trying to live that way would be humbling and difficult.

But some times I long to try — to just walk away from everything here that seems so vulnerable to “system shocks”, so efficient instead of effective, so absurdly and ever-more expensive, and such an unnatural way to live. I often look at maps to see where I might ‘walk away’ to, to escape civilization’s bar-less Prison of the Privileged. Somewhere that, if my experience in a less-civilized world really went badly, would leave me the option of returning to the Prison, chastened and resigned to stop looking for something else.

Of course, there is no place that looks like an obvious choice — all my anxieties about despotic governments, unknown languages and ways of doing things, third world police and gangs, being surrounded by grinding poverty, human and other animal suffering, and my own inadequacies at being able to look after myself, and the fears, shame and grief those anxieties incite, immediately have me spinning the globe to seek some safer, less terrifying alternative.

Maybe it’s enough to at least get out and walk in the moonlight, where I can hear the creek gurgling beside me, and the occasional rustling of sleeping creatures. Maybe it’s enough that I know my life, with all its anxieties, superficial comforts, incapacities and incongruities, makes no sense. That in many ways I’m really only half alive, compared to those who live ‘less civilized’ lives, but perhaps that sheltered, anxious, inexperienced life suits me, my disposition, my conditioning, my perception of what is, and why.

Maybe it’s enough to have a theory about why things, and behaviours, make no sense, and yet they don’t seem to change much. We seem to spend most of our lives hoping and looking for something better, yet never either finding it or giving up the search. Seems like a recipe for unhappiness. The reason I describe myself as a ‘joyful pessimist’, I suppose, is because my life is so much better, easier, than I can imagine it could be or could have been. If I didn’t have such a ghastly imagination, I might be a much more unhappy person.

Human selves seem programmed, or conditioned, to strive constantly for something better, to never be entirely satisfied, and to never give up even when things are awful and seem destined to only get worse. That seems to me to be a tragic and unhealthy condition, one that suggests that human selves represent a serious and tragic evolutionary failure. But we can’t seem to help ourselves.

Pretty funny, when you think of it. Like the finger trap, that only squeezes tighter the harder you try to extract yourself from it.

Still, glad to be alive, apparently. The moon is full and bright, and its light shining through the trees and off the river’s surface gives everything a surreal, magic glow. I walk back to the apartment, which is called Oasis, stamp my feet at the door, wander into the elevator, and take off my hat and gloves as my fogged-up eyeglasses slowly clear. Home, is what it’s called. For now, anyway.

This entry was posted in Creative Works, How the World Really Works. Bookmark the permalink.