Dave Gets Censored by the CBC 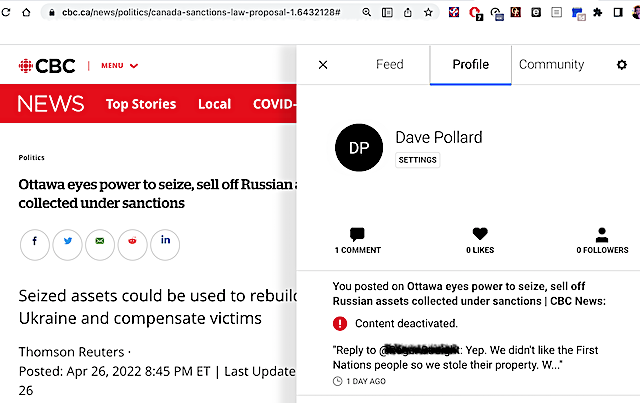 I almost never comment on online news stories, but I was absolutely incensed by Trudeau Jr’s new law legalizing the theft of Russian citizens’ bank accounts and other property without a trial or right of appeal.

So I wrote this comment on the CBC’s story on the new law, in response to another commenter who called the new law what it is: theft. This was my comment:

Yep. We didn’t like the First Nations people so we stole their property. We didn’t like Canadians who came from countries we fought in WW2, so we stole their property and put them in camps. We didn’t like the Taliban so we sat idle as the US stole billions of dollars from Afghani bank accounts, some of it humanitarian aid funds desperately needed by their starving citizens, and gave it out to Americans. Now because we don’t like Russia we’ve legalized the theft of property from Russian citizens. Wonder what will happen if the government decides it doesn’t like us?

Since it was my first comment in three years on an online news article, I was curious to see if the majority of readers would agree or disagree, or whether there would be any response at all. Since I received no notifications, I figured the latter, which is fine, but when I clicked on my name at the top of the CBC site (I had to register to comment), I found out why:

My comment was censored. Right after I posted it. No explanation. Hundreds of inflammatory anti-Russian war- and hate-mongering comments were approved, but apparently mine was unacceptable.

Foolish naive Canadian that I am, I guess I shouldn’t have been surprised, but I was.

7 Responses to Dave Gets Censored by the CBC