Do We Know Ourselves Only Through Our Relationships? 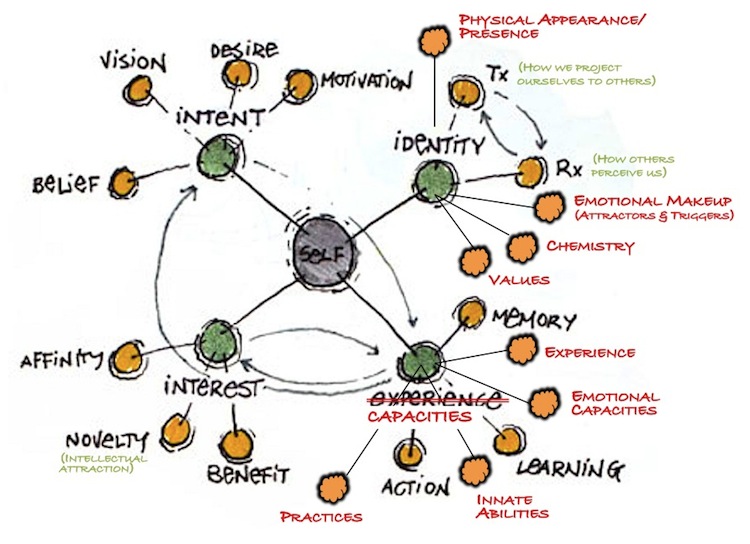 Most of us define ourselves in terms of our relationships — who we work with, who we live with, and who we consider to be in our ‘circles’. When we write a bio, or when we chat with people, we relate, mostly, our interactions with other people and what they have led to.

No matter what we may tell ourselves, and others, the truth is that attention and appreciation and reassurance are inevitably a part of what motivates us to write in public ‘spaces’. For the large majority of former bloggers — those who quit blogging over the past fifteen years — social media simply offered more and easier attention, appreciation and reassurance than blogs. I would be lying if I said I didn’t sometimes wax nostalgic for the early days when I was a “Canadian Top Ten” blogger with 2000+ readers a day. I quit using Twitter, and Facebook (except for occasional visits for a specific purpose) long ago, when I realized they were hazardous to my mental health.

There has recently been a small resurgence of blogs, mostly on platforms like Medium (eg Umair Haque), Substack (eg Caitlin Johnstone), and Ghost (eg Indrajit Samarajiva) that are essentially newsletter content creation tools, since most people rely on email notifications to read blog content, rather than going to a blog’s site or using an “aggregator”. I suspect that the 550 subscribers to my blog using the follow.it free newsletter subscription service, represent a significant proportion of my total readership. Medium and Substack “monetize” blogs by nagging you to pay money to subscribe to “their” blogs (they share some of that money with content providers) and may block you, like the MSM do, if you try to read too much without subscribing.

If you are not already a celebrity and believe that you can become even modestly rich, or an “influencer”, by blogging on one of these platforms, I have a bridge I’d like to sell you.

If you’re not a member of the 1% of 1% that can earn real money on these platforms (anyone remember Clay Shirky’s Power Law of blogs?) the question remains then: Why do you write in a public ‘space’? Is it all about getting attention, appreciation and reassurance? Are you looking for ‘friends’ in all the wrong places?

Or are you seeking, as Euan suggests, to know yourself better through your relationships with others? And, he asks, Can we truly be ourselves if it becomes too important to us that we be liked, listened to, appreciated and reassured we are right?

These are brilliant and important questions, and we can only answer them for ourselves (and only then if we know ourselves well enough to be honest with ourselves).

So this is just my personal answer to these questions:

As I get older, I become less and less concerned with what I know, including what I know about myself. Instead, I’m seeking to be a little more self-aware of why I think what I think, believe what I believe, and do what I do. If you’ve read my other work, you probably know that I believe we do what we do purely out of conditioning, and then rationalize it as being ‘our’ choice afterwards. Some of that conditioning is genetic, visceral. Much of it is cultural, and this is where relationships come in. Who and what we pay attention to, I believe, determines the sources of that conditioning.

But of course, who and what we pay attention to depends (if you buy my ‘conditioning’ logic) on our previous conditioning. That’s why, as someone who has recently and uncomfortably given up believing in free will, I don’t think we have any choice whatsoever about our actions, or about the thinking and belief systems that rationalize (rather than determine) them.

The best we can hope for, I believe, is to be a little more self-aware of how we are being conditioned and hence what underlies our belief systems. The people who have most influenced me, throughout my life, have always challenged their own beliefs, and mine, in search (perhaps in vain) for what is really true. So I’ve been encouraged to challenge everything I believe. That is, I’ve been conditioned to be less concerned with being ‘liked’, appreciated and reassured than about knowing what’s actually true. And I’ve been conditioned to be open (even enthusiastic) to ideas and evidence that completely undermine what I had believed to be true. And I’ve been conditioned (more biologically and genetically than culturally) to trust my instincts, which have told me, all my life: Life shouldn’t have to be this hard. Look at how effortlessly and equanimously wild creatures live. We must have it all wrong.

I’ve been blogging for just about 20 years now, and over that time my beliefs about almost everything have radically changed. I’m much less sure about what I believe than I used to be. And my beliefs are now wildly different from those of most of the people in my ‘circles’ — notably on matters of veganism and eating well, on the inevitability of global collapse, on my belief that everyone is doing their best and no one is ‘to blame’, on free will and the nature of ‘reality’, and, most recently, on the causes and resolution of the Ukraine war.

And I don’t really care that those I have relationships with don’t agree with or even understand what I believe. I mean, it would be nice if everyone agreed with me about these things, but I appreciate that what they all believe is not in anyone’s control (including mine). I will not convince a single soul on any of these matters unless and until they are ready to hear the message. If I do manage to convince someone, then that would have happened anyway.

So, like Euan, I now write my blog basically to think things through for myself, to “see my reactions placed before me for inspection”. When someone agrees with me, it is reassuring, but at the same time a bit troubling: Have I oversold this argument? Am I really sure I believe it myself?

As I get older, there are fewer people in my circles than there used to be. That’s been a mutual decision, as I tend to not burn bridges, nor assert myself to keep a relationship going unilaterally. Perhaps that’s why I feel I ‘know myself’ less well than I did when I was younger and more sure of everything. I am content not knowing myself, and content believing tentatively that one cannot know oneself. I am even dubious that there is a real ‘oneself’ to know.

So why do I have relationships? Not to be liked, or appreciated, or reassured, or to know myself better. It’s simply for the pleasure of their company. Like when they share a novel insight, a new idea, an enjoyable story, a warm hug, or a visit to a beautiful place or interesting event. Enjoying another’s company is an animal thing for me, not a means for self-exploration. Increasingly, I prefer to not even talk much; when I find people whose company I enjoy, I’m content to listen, or even with silence.

So, I don’t know who I am, or even if I am. And therefore I depend not a whit on relationships to try to figure it out, or express it. When asked how I self-identify, in any context, I simply reply that I do not.

Have there been times when I have self-censored or misrepresented my beliefs (which some would simply call lying) in the company of others? Of course. We are conditioned to conform, suppress, compromise. Without that conditioning, our overcrowded, collapsing, overstressed world would be, I think, an unimaginably violent place, and collapse would have occurred long ago. We are not meant to live this way.

But my concealing my feelings or beliefs is something I (at least now) do consciously, rather than because I want to be liked, or listened to, or appreciated, or reassured. The cognitive dissonance can be massive, but it’s bearable if you don’t take yourself too seriously! If I wanted to be popular, I certainly wouldn’t be writing about radical non-duality, collapse, our lack of free will, or the vulnerability of people across the political spectrum to propaganda, cognitive bias, simplistic thinking, and groupthink.

It is true that I don’t write much about the health benefits of a balanced, minimally-processed, entirely plant-based diet, or the dangers of other diets. This is the only subject in my 20 years of blogging that has attracted death threats. I don’t write about it, not out of fear, or not being liked, or losing readers, but because it’s simply not worth debating. When people are ready to listen to this message, they will hear it, probably from experts in nutrition. I’m not being inauthentic, to them or to myself, to consciously avoid wasting time and energy talking about it.

So, I can’t speak for others, but my sense of self-worth is not tied up with others’ opinions of me. I may be deliberately cautious about what I say to people, and sometimes (I think tactfully) even leave people with the impression I believe something when I don’t. Sometimes it makes sense to pick your battles, or wriggle out of them entirely. There’s no shame in that. But that doesn’t change what I think, believe, or feel. It doesn’t change ‘me’ (if there even is a ‘me’).

Thank you to Euan for posing these fascinating questions. Here are a couple more questions (shades of blogging’s notorious Friday Five!) that I have been thinking about of late, somewhat along the same lines:

No answers are required. These are just, perhaps like some of the best questions, provocations to think about things that might help us know ourselves a little better.

This entry was posted in Our Culture / Ourselves, Using Weblogs and Technology. Bookmark the permalink.

4 Responses to Do We Know Ourselves Only Through Our Relationships?