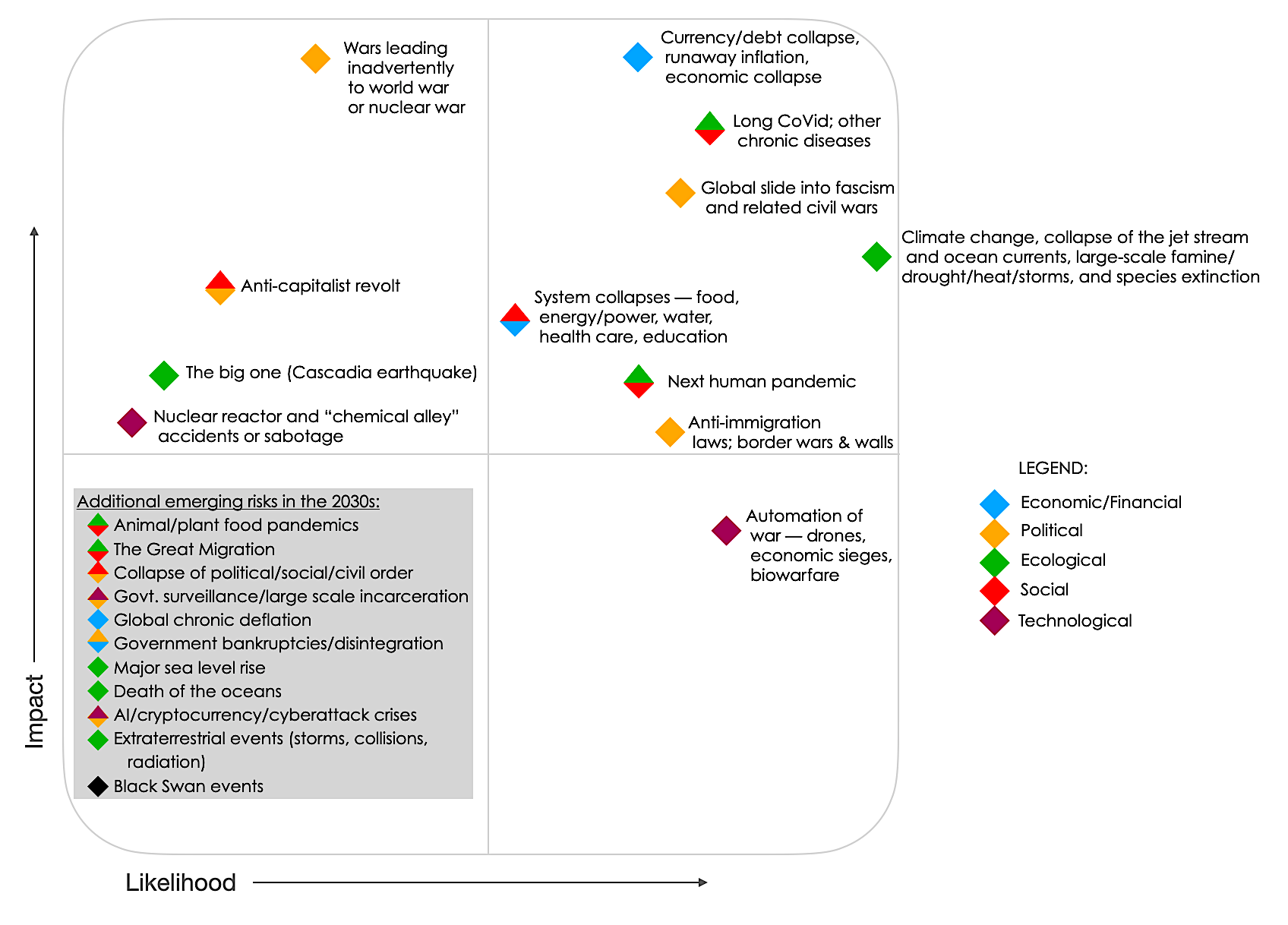 In recent years, I’ve made fun of the extravagant annual Davos self-congratulatory business ego-fest, and in particular the annual survey of their expert gnomes on the biggest global risks to business. Their fad-happy, bumbling risk predictions reached an all-time low two years ago when, just three months before the first huge wave of CoVid-19, these ‘experts’ ranked ‘spread of infectious disease’ dead last of 30 types of risk.

Before CoVid-19, the expert gnomes were asked to assess risks in two dimensions – probability (%) of the risk occurring in a particular time horizon, and impact ($) if it did occur. This is the classical risk model, but it appears it was just too confusing for the gnomes, and now they’re just being asked to rank the ‘overall’ risk, I suppose qualitatively weighing the two factors.

This year’s assessments are, if anything, even worse than prior years’. It appears they do not follow current events or read history beyond their native countries, since, despite the doomsday clock readings, the risk of global or nuclear war was nowhere to be found in their rankings. What ranked first, as the highest ‘risk’ for the next decade, was — get ready to groan — “climate action failure”. Apparently they don’t appreciate that this prediction is about as bold as predicting February will follow January. A certainty is not a “risk factor”, unless, I suppose, one is drinking the Davos Kool-aid. This “risk” has intermittently appeared on and disappeared from their lists for decades, depending on, apparently, who this year’s special guest speakers at Davos are.

Their second and third greatest “risks” — extreme weather and biodiversity loss — are corollaries and consequences of the first, though since they are treated as simply costs of doing business (much of the risk report is, after all, about “economic recovery” and “growth”), it’s hard to see their inclusion as major risks as anything more than virtue signalling. But, then, virtual signalling is one of the least expensive costs of doing business these days, and, supported with the right marketing, PR, misinformation and celebrity endorsements, it makes for great business.

Enough grousing about Davos. Looking at the latest report, I got to thinking what I would list as the greatest global risks for the rest of this decade, and what additional risks will probably have to be added to the list in the 2030s, which is starting to look like it may be the most challenging in our species’ short history.

These are not specifically “business” risks, though they are all very disruptive to “business as usual” – which is not necessarily a bad thing. My assessment is shown on the chart above. Here’s a brief walkthrough, in order from top to bottom: