What Do We All Care About? 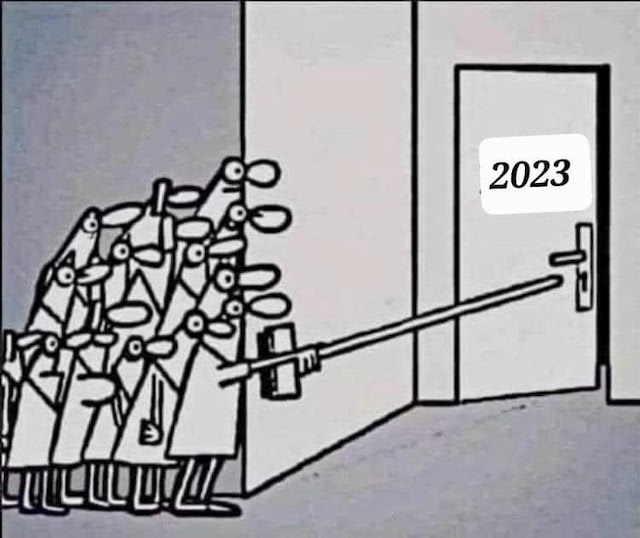 a repurposed cartoon from two years ago, original artist unknown; thanks to John Whiting for the link

As 2023 began, Paul Heft and I, along with some of Paul’s friends, were exchanging links and emails on a series of end-of-year reflections on the social, political and economic state of the world. (More on that in a later post.)

One of the links was to an article by one-named writer Aurélien entitled The Year’s Midnight, on the author’s Substack blog Trying to Understand the World.

It laments the “kind of numb hopelessness” that seems to characterize so many of us across the social, political and economic spectra, “the abandonment of even the possibility of hope… It’s not the fear that things will never get better, but rather the certainty that they will inevitably get worse.”

Distinguishing this state from similar periods and situations of despair in past, Aurélien explains:

We are dealing with the immense and still poorly understood psychological and spiritual consequences of forty years of Liberal Nihilism: … We are degenerating into isolated, alienated individuals, with no relations except economic ones, no society, no common points of reference, no hope and no future.

This is the natural result of the thorough-going application of an ideology which has no moral compass except short-term financial efficiency and total personal autonomy, and so as a result, we have lost not only the ability to manage and plan at the level of the community and the state, but even the awareness that such a thing might be necessary.

The author goes on to say that at the very time we have lost faith and trust in each other and in our public institutions, we have replaced it with a faith in what Jacques Ellul called “la technique” — technology, technical solutions and other standardized processes and systems (today that would include AI) — to solve almost all of our problems. As John Gray has explained, “la technique” has always created far more problems than it has solved. Aurélien says that now “there are no shared alternative frameworks within which a different and better future could even be imagined”, so protests are merely negative, incoherent, devoid of any shared vision or direction forward, not even revolution (“People cannot fight for something they cannot conceptualise.”)

Hence Liberal Nihilism, and hopelessness that anything can be done that can even prevent things from getting inexorably worse. Jacques’ hope was that one “shared alternative framework” that might emerge and galvanize the population across the spectra of despair was anarcho-syndicalism (local autonomous structures, replacing collapsing systems that relied on centralized “techniques”). So the first step might be “a Great Defection, as people turn their backs on a state system that does nothing for them”, and instead moving towards systems based on local collective action and mutual aid.

Paul Heft asked me if there might be some other “shared alternative framework” that might apply across the spectra of despair — something that everyone from socialists to ultraconservatives to nationalists to libertarians might agree on as something worth fighting for, trying out, learning to build, community by community from scratch.

My sense is that any such framework would have to stand above much of the moralizing, angry, negative rhetoric that passes for political discussion these days. The worst framework we could choose, I think, would be something like “social justice” — the current ubiquitous weasel phrase in what were once progressive circles. Whatever it might once have meant, it has now, I believe, come to mean “the things I believe to be right and fair”. And so, if your set of things you believe to be right and fair differ utterly from mine, we can both defend our agendas as striving for “social justice”. But we’re not going to get anywhere.

Whatever we come up with as an alternative framework has to rise above that, and has to be positive and forward-looking, not bitter about past “injustices” and preoccupied with reparation and grievance. That’s a tall order. A society that feels it has no Future is inevitably going to be fixated on the Past, on grieving instead of building adaptability, and on how we have differed instead of what we believe and care about in common.

We also have to get above jargon, and terms that are laden with connotative baggage, blame-y, and overly simplistic. So while “climate justice” is no better than “social justice”, one possibility for an alternative framework might be:

A clean, safe, livable world, for all, now and for the future.

This does not, and cannot, require some kind of grand global social or spiritual awakening. It says nothing about how we got to this point of despair, or who is to blame for it, or who has suffered or is suffering more than others. It is, as much as I think is possible, morally agnostic. It is what, I think, had they a voice, most living creatures would specify as the minimum requirement for the kind of comfortable life that was their birthright before human civilization began crowding them out. Of course the terms “safe” and “livable” need to be defined, but I don’t think achieving a consensus on them should be terribly difficult.

From that vision, our priorities for all social, political and economic actions and decisions would, I think, flow quite obviously. Dealing not only with the precarity of gross inequality and climate collapse, but with the multiple broader crises of global ecological collapse and economic collapse, would command most of our attention and decision-making.

I have no idea whether we could get anywhere, particularly at any scale, starting from this vision and framework. Certainly it would be massively difficult, and more likely to find purchase in some local cultures than others. And the framework almost certainly needs some tweaking, though we should take care not to burden it impossibly with the rectification of past grievances or with social, political, or economic ideology of any kind.

But I see no other way past the dead-end of Liberal Nihilism.

I know lots of people who believe that any kind of systematic, large scale “walking away” from the established order will be met with violence and oppression by the rich and powerful, and they may be right, but I’m not so sure. Systems collapse around the edges, and then the collapse slowly, and then more quickly seeps through and undermines the rest, so that those defending the system are often caught unawares. The key will be when it becomes easier, and more compelling, to walk away and start supporting the creation of something new, than to continue to defend and suffer the miseries of the collapsing system.

My sense is that, for a lot of people, that time isn’t that far off.

6 Responses to What Do We All Care About?