The Trouble With Stories 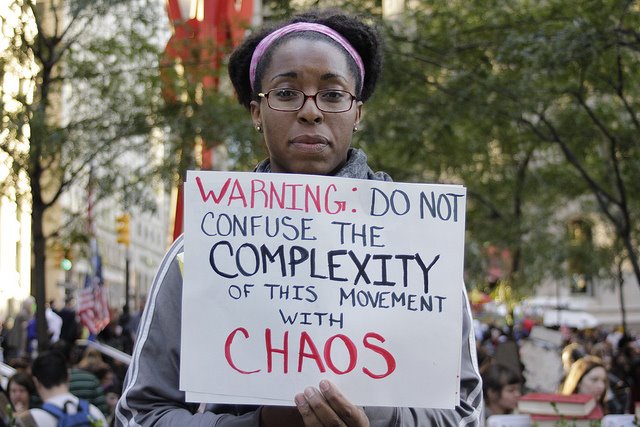 We hold stories dear to our heart. Some even believe “stories are all we are“. I love stories. I’ve encouraged groups doing strategic planning — looking for the best way forward — to start with ‘future state’ stories that describe a day in their lives once the group’s goals have been achieved. I’ve learned that telling stories is the best way to hold an audience and help them remember your message. And that they’re subversive — you can get people to think about a point of view they would normally balk about considering by couching it in a story. And that if a story is sufficiently compelling, it really doesn’t even matter if it’s true. We want to believe. Make-believe. Make us believe by telling us a story.

So what’s with the title of this article? What could I possibly have against stories?

The trouble with stories is that they make us believe what’s not true.

I wrote a rant against stories five years ago, in which I said:

Stories are addictive. They oversimplify complexity to the point we become complacent, that we think we know what is really happening and that all the alternatives have been identified and considered. Stories are sedative: We tell our children “bedtime stories” to lull them to sleep. Stories are manipulative, readily subject to spin, especially on complex subjects about which there can never be absolute or certain knowledge. And they are subject to censorship and the crime of non-reporting, which the mainstream media do constantly. Stories give us false hope. Many live their lives dreaming of what might be instead of realizing what is. Stories lead us to live inside our heads instead of in the real world. Stories are excuses for inaction: When we get worked up about a story, we can mistake that for actually doing something about it. And stories are only stories. The true horrors are not just stories. Just as a map is not the territory, a story is not the thing that the story is about.

At that time, I also described two “laws” of human cognition and behaviour that, I said, conspire to make stories so powerful, and so dangerous:

That article was criticized by those who thought stories to be so essential to human nature, that to argue against their use was to deny who we really are. At that time my principal argument against stories was that we substitute reading them and telling them for meaningful action to deal with the real issues the stories are about. And we do. But since then I’ve become more sanguine about what we can really do about these issues. My further study of complexity has led me to believe that it’s too late to change the massive, global, evolved systems that are destroying our world, if it were ever possible at all.

So my problem with stories, now, is not that they’re unactionable, but that they’re untrue, and our belief in them as being true causes us to behave in dysfunctional ways.

Most of the harm of stories stems from their deliberate (and necessary, for brevity) simplification (sometimes to an extreme degree) of a complex situation, a situation rooted in complex systems. Here’s what I’ve learned about complex systems:

The stories in your daily news, the biographies you read, the ‘self-help’ books with stories of transformation, the case studies you take up in business school, the myths and fables you grew up with, the war stories, success stories, creation stories, the epic novels and plays and films of all genres, and even documentaries — all stories, convenient, arousing, manipulating, entertaining, distorting, oversimplifying fictions, packaged and sold to us avid (or reluctant) consumers. We want to believe it’s simple, that it can be fully understood, that there’s a simple answer, and we loathe complexity because it won’t give us simple ‘truths’. But if it’s about organisms or people or societies or ecologies, or even scientific phenomena (all complex systems), it’s never simple.

Look at the elements of archetypal stories: They have a sympathetic protagonist, a struggle against a heinous unredeemable enemy (which may be human, or not, and may be metaphorical, or even within the protagonist), a ‘turning point’, and a resolution, redemption, or salvation — a great and victorious change. None of these things is real — reality is always far more complex than this. Consider the situation in Syria, for example. Who are the good guys and who are the bad guys and how should we intervene? Think you know? Not so fast. Here’s just a teaser (courtesy of the Vlog brothers) on how complex the situation there really is, and there is no intervention that is likely to help the situation more than it worsens it. (In fact, it’s even more complex than the Vlog brothers portray it.) And the situation in Ukraine is even more complex than that.

Let’s consider some of the stories that progressives love to tell: Martin Luther King’s “I have a dream” story. The invention of the Internet. The abolition of slavery and forced segregation. The defeat of Nazism and the fall of  the Soviet (and other tyrannical) empires. The extension of rights to women, gays and minorities. The ending of the Vietnam War. We tell these stories, with the best of intentions, as if they were true.

But as tempting as it may be to see a powerful cause-and-effect in a few actions by one or a few people, the sheer complexity of these systems is such that change, which in history books is written by the victors who always overstate their successes and omit their failures, occurs slowly and unpredictably as the result of a million factors, most of them uncontrollable. Social change occurs when the majority are fed up with the status quo. Each new generation is less attached to that status quo, and hence more open to changes, some of which are for the better, and some of which are for the worse. And all inventions are built, as they say, on the shoulders of giants. The Internet was inevitable once certain prerequisite technologies had been invented or evolved (many of which were invented for completely unrelated reasons), and it was impossible without those prerequisites. A number of those prerequisite technologies were, no doubt, invented for military ends.

Of course, you can change people’s minds about issues you care about (most effectively by telling them stories). But often they will change them back again. As Dennett and Lakoff say, changing the worldview that underlies someone’s beliefs is something very different. It’s a slow and unreliable process. And even then there’s the additional step of actually getting them to act on that changed worldview. And that action, if it happens, is only one a million variables affecting the system, most of which have evolved to keep the system in stasis as long as possible.

We want to believe that individual conviction and effort can make a difference. And of course, at the local level it can. But trying to change large, complex systems quickly (in less than a generation) is like trying to get the waves of the sea to part. And even when these systems collapse, as all systems do, we can’t expect to be able to impose, on any significant scale, a new ideal ‘designed’ system on the ensuing chaos that will work. Lenin tried that.

Instead, what we can do is find workarounds that make things at the immediate level where we do have some control, work a bit better. And if we build strong connections and a sense of local community, we can co-develop and share those workarounds for the benefit of others. Then, as the current economic and political systems continue to collapse, we will have the rudiments of new systems that can gradually replace them. This is already happening in different ways in many places.

And we can, instead of trying to change teetering, large, complex systems, adapt to the realities of these systems by learning new competencies and capacities that will enable us to thrive as these systems collapse, to starve them to the extent they’re destructive, and to stay out of their way.

And, instead of dwelling on the stories we tell about the past and the future, and about ourselves and the world, we can simply be present, attentive to what is and can be done, right here, right now.

This is how wild creatures deal with complex systems (such as their ecosystems, and human systems that intervene in their habitat). They work around, they adapt, they learn, and they live in the moment. They have no need for stories.

Such mundane, local work is not, of course, the stuff of great stories. There are no heroes, no enemies vanquished, no great victories after epic struggle, no dramatic turning points, no great redemption or salvation. There are no inspiring leaders, taking us valiantly forward. There is no great change. No ‘progress’.

I love stories. They’re a great way to remember things, and to learn simple things, and to imagine possibilities, and to entertain each other. But we should be careful not to believe them, not to base our beliefs or actions on them, and not to hope (or fear) they will ‘come true’. They aren’t true. Not any of them.

9 Responses to The Trouble With Stories