If You Wanted to Sabotage the Canada/US Elections…

(In case it isn’t obvious, this article is meant as satire.) 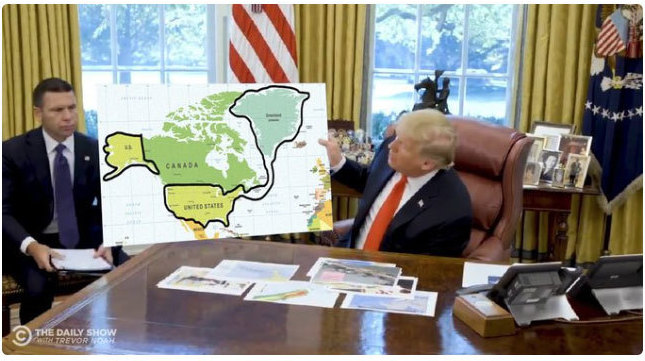 image from The Daily Show
Canadians go to the polls for a federal election this fall; Americans do so next fall. There is already evidence of large-scale election meddling through social media, with campaigns of misinformation attempting to convince target demographics to change their votes or their views on particular subjects.

These misinformation campaigns prey on the fact that, under our hopelessly broken first-past-the-post electoral system, people vote against the party/candidate they least want to win, rather than for anyone or anything. And in referenda, they are much more likely to show up and vote against a resolution if they’re unsure or frightened about it, than to support it if they’re OK with it.

The objective of misinformation campaigns is usually to find ways to outrage one side, or sometimes both sides of an issue simultaneously, in order to polarize, obfuscate, and/or distract. To polarize so that reasonable consensus can never be reached; to obfuscate so that the important aspects of an issue, or the important positions of the candidates, get lost in the shouting over one particular (usually misrepresented) fact, issue or position; and to distract so that no one is paying attention, either to what’s really important or to those who are coherently offering understanding and new ideas about the real issues and crises we’re facing.

Danah Boyd recently wrote a fascinating article about the deliberate propagation of misinformation through social and mainstream media, including gaslighting (the systematic, psychological manipulation used by cults and abusive partners to the point the victim begins to doubt their perceptions, reality or even sanity), using untruths to encourage conspiracy theories, and flooding the Internet, its bubbles, and the faux-news channels and talk-shows, with inflammatory made-up phrases (“partial-birth abortion”; “death taxes”) for which there is no rebutting or factual information available, because there are no links to articles where the correct terms are explained. In other words, this is the business of deliberately manufacturing ignorance, misunderstanding, and conflict to subvert the political process.

Such misinformation campaigns are not used exclusively by the Russians and Chinese (though there is evidence they have become particularly advanced in those heavily repressed countries). They are increasingly used everywhere in campaigns by the parties and candidates themselves, and especially by special-interest groups with a vested interest in keeping the public uninformed, misinformed, distracted and put off by the whole political process to the point they cease participating in it, so the special-interest groups’ political power and influence is unchallenged.

This is not hard to do. But why would anyone want to do this? Several reasons: To change the results in favour of candidates the saboteurs prefer, most obviously — candidates who are dysfunctional or easily corruptible and/or who share the saboteurs agendas. Or simply to destabilize the country’s body politic to weaken its global influence. So much power is at stake there is always great motivation to try to steal it, and misinformation (in both mainstream and social media) is an increasingly effective way to do it.

If you wanted to sabotage the upcoming Canadian or US elections, here are a few things you might do, if you had the money and power (that probably lets you and me out):

Then again, you may not need to do any of these things. The political parties and candidates in both countries seem bent on sabotaging their election campaigns all by themselves. Nevertheless, I think we may be unnerved by what may happen over the next months and years about how election processes work, and don’t work, in the 21st century. There are some rumblings that the entire idea of (at least representative) democracy is in inevitable and permanent decline. Whether that happens or not, we should be prepared for a roller-coaster ride, and some big surprises, in the elections to come. The voters, in both countries, and across the political spectrum, are not happy with the current processes, or the candidates and actions they produce.